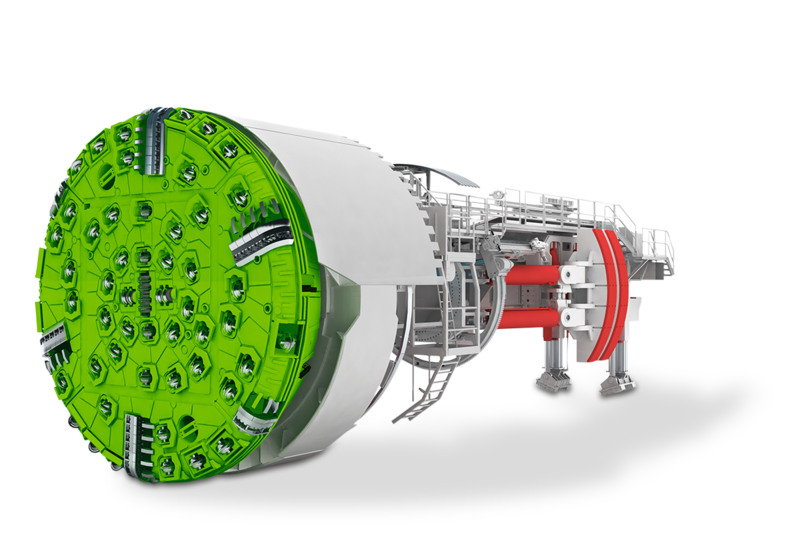 Herrenknecht Gripper TBMs have proven to be efficient solutions for fast mechanized tunnelling in hard rock on many occasions. Due to the process-typical rock support method without segments, medium to high rock strengths are a requirement for high advance rates. In more fractured geological formations, various systems for immediate rock support behind the cutterhead are installed at the TBM directly.

When tunnelling with a Gripper TBM, a rotating cutterhead equipped with disc cutters is pressed against the tunnel face with a pressure of up to 32 tonnes per disc. Due to the rolling movement of the cutter, single pieces – so- called chips – are broken out of the rock. Water jets can cool the cutting tools and reduce dust formation. Buckets installed at the cutterhead take up the excavated material, which slides to the center of the machine via integrated muck chutes while the cutterhead rotates, and then falls through the funnel-shaped muck ring onto the machine belt. From there, the rock chips are passed on via further belt conveyors or transport vehicles and removed from the tunnel.

Braced directly in the rock

Before each stroke, the Gripper TBM is braced against the previously excavated tunnel using laterally extendible hydraulic cylinders. The laterally mounted gripper plates or gripper shoes are the core element of this machine type, hence the name of the machine. Subsequently, the thrust cylinders are braced against the gripper unit and push the rotating cutterhead against the tunnel face. Several telescopic partial shields stabilize the machine against vibrations during the boring process, thus reducing wear and tear. The invert shield also serves as a sliding shoe for the TBM. Lateral partial shields are pressed against the rock with a stabilizing effect. The roof shield above this unit, often equipped with a finger shield extending backwards, offers protection against breaking rock. After completion of a stroke, tunnelling is interrupted and the gripping unit is moved forward.

Control made to measure

The gripper unit also helps to control the TBM. The main beam is positioned in the center of the machine. The beam is moved vertically and horizontally using the hydraulic cylinders in the area of the gripper unit. This allows for precise control. The current position of the TBM is permanently monitored and adjusted to the specified alignment if necessary.

Buckets, muck chutes and muck ring provide for an efficient removal of the excavated material onto a center belt conveyor

With rock anchors, steel mesh, steel arches and shotcrete, depending on the geology

Securing the machine systematically from the start

Gripper TBMs are open-mode tunnel boring machines and do not have a closed shield skin. Therefore, the tunnelling performance depends on the time required to secure the rock. In difficult geological formations, Herrenknecht Gripper TBMs allow for comprehensive measures to temporarily secure the rock right behind the cutterhead. In the so-called L1* working area, securing is mainly achieved using rock anchors, steel mats and steel arches. Probing and, if necessary, soil conditioning ahead of the machine are possible using additional drilling rigs. Water escaping from the rock is pumped away via a drainage system in the invert section of the machine. The excavated tunnel diameter is permanently supported with shotcrete in the back-up area. All necessary supply facilities are installed there. This often includes, in addition to the installation of permanent shotcrete, the installation of invert segments.

Flexible even in high-pressure rock

With their partial shields, Herrenknecht Gripper TBMs offer a special advantage in comparison to closed shield types. By retracting all shields, the overall diameter is reduced by up to millimeters during tunnelling, depending on the machine type. This allows for a flexible reaction to expanding rock and prevents the machine from jamming. With the aid of the gripper unit, the machine can even be retracted completely, if necessary. This means that the front part of the cutterhead can be accessed directly.

Gripper TBMs with diameters of less than 3.8 meters are a design challenge. A wide range of technology must be installed in a small and narrow package and there still needs to be sufficient work space for the TBM personnel. Herrenknecht engineers have mastered this challenge for micro grippers by developing a number of specialized technical solutions. These include integrating the gripper unit in the shield section and direct machine control through lattice cylinders which, at the same time, generate the thrust force. Due to their transversale configuration, these cylinders also counteract roll and reduce vibrations in combination with smaller front stabilizers.