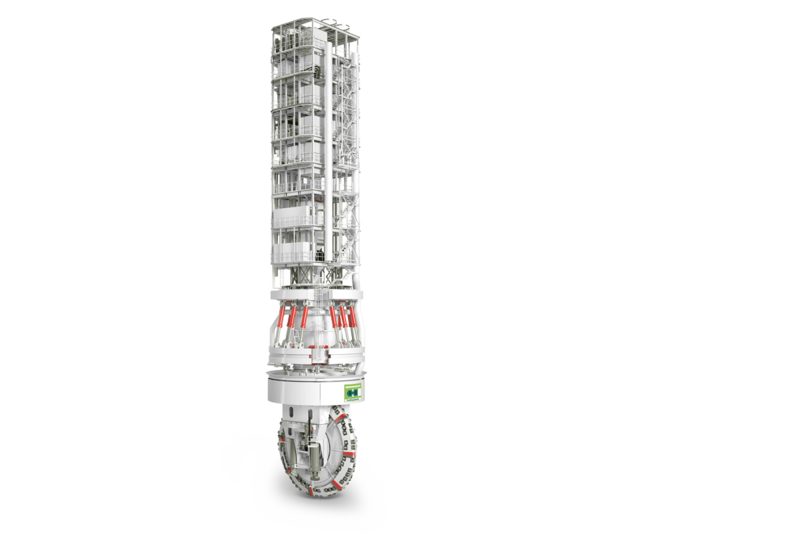 Safe and fast full-bottom shaft sinking to depths of 2,000 meters

To develop deep deposits safely, economically, and above all quickly, Herrenknecht engineers worked with mining company Rio Tinto to develop the Shaft Boring Machine (SBM). The highly mechanized machine has been designed for full-bottom shaft sinking to depths of up to 2,000 meters and for diameters of up to 12 meters in stable consolidated rock.

When developing the new Shaft Boring Machine, whose design resembles a conventional tunnel boring machine, some fundamental differences in comparison to horizontal tunnelling had to be taken into account. A major challenge was collecting the rubble from the shaft bottom and transporting it vertically through the machine to the point of transfer to the shaft conveyor. The solution: the cutting wheel was positioned vertically.

Excavation of the rock takes place in two consecutive steps. In the first step, the cutting wheel penetrates vertically into the rock, creating a 1.5 meter deep cut. In the second step, it rotates 180° around the vertical machine axis to cut out the entire shaft profile. The cutting wheel not only loosens the rock, it also works in a similar way to a bucket wheel for collecting the muck. The rubble is directed to the center via integrated muck chutes. There, the material is transferred to a vertical conveyor, which transports it to the transfer point at the shaft conveyor.

To brace the weight of the machine during excavation and absorb the reaction forces from the cutting process, the gripper system braces itself against the shaft wall.

High level of safety thanks to state-of-the-art technology

During development of the SBM, great attention was paid to increasing work safety. As with a hard rock TBM, the shotcrete for the primary securing of the shaft wall is applied by remote control directly behind the cutting wheel. Disc cutter changes are carried out in rotary drive in a specially secured working area, which is easily accessible and protected from falling rock. These design features mean no personnel needs to be in hazardous areas during normal operation.

The SBM operator controls all functions and the semiautomatic excavation process

Supports the machine weight and provides reaction for the cutting forces

Propels the cutting wheel and turns 180° around the vertical axis

Several applications can be installed: shotcrete, bolts and mesh to support the shaft wall as primary lining

The SBM operator controls all functions and the semiautomatic excavation process

Supports the machine weight and provides reaction for the cutting forces

Propels the cutting wheel and turns 180° around the vertical axis

Several applications can be installed: shotcrete, bolts and mesh to support the shaft wall as primary lining

With the SBM, Herrenknecht and Rio Tinto have developed a machine concept that meets the highest demands in the mining industry. Not only the fast construction time of the shafts, but also the high level of work safety are the focus of new developments for the mining sector as a whole.