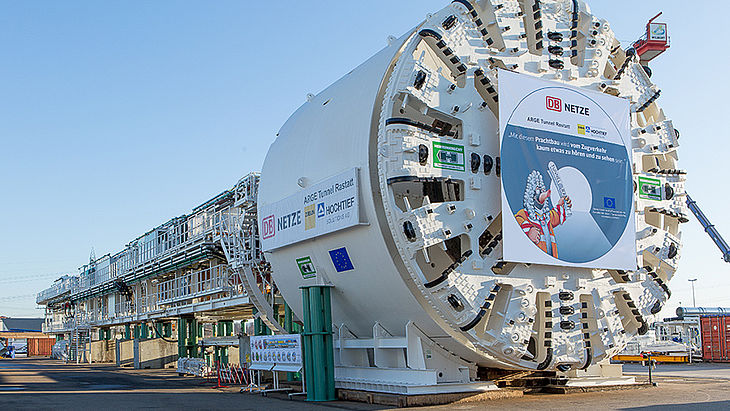 Two Herrenknecht Mixshields have been used for an approximately 4,000 meter long tube of the twin-tube Rastatt Tunnel. Currently the Herrenknecht Mixshield in the west tube is still working. The tunnel with a total length of 4,270 meters is part of the upgraded and new line Karlsruhe – Basel on the long-distance freight route between Rotterdam and Genoa. It will handle the bulk of the freight and long distance traffic in Rastatt and thus considerably relieve local residents of disruption by rail traffic.

Following the successful acceptance of the first TBM at the Schwanau plant in December 2015, the 93 meter long and 2,300 tonne machine was disassembled and transported to the launch pit in Ötigheim north of Rastatt, where on May 27, 2016 with the symbolic first dig and its christening with the name "Wilhelmine" it began excavating the east tube. The second Mixshield, which began excavation of the parallel west tube on September 27, 2016, was christened "Sybilla Augusta".

Ahead of the tunnel boring machines lay a distance of around 4,000 meters under the urban area of Rastatt through groundwater and unconsolidated rock. This included crossing under the Murg and Federbach rivers as well as the existing Rhine Valley Railway. In soft ground conditions, in particular with heavily water-bearing soil layers, Herrenknecht Mixshields are the safest and most efficient tunnelling technology. Thus the two large-diameter machines achieved daily top performances of more than 21 and 23 meters respectively.

By August 2017, the TBM in the east tube had completed over 98% of the tunnel section. On August 12, 2017, in the area of Rastatt-Niederbühl, the existing railway tracks at the point where the tunnel under construction crosses the Rhine Valley route collapsed. The tunnel boring machine "Wilhelmine" had already tunnelled under this spot and was just about to reach its target. To get the track fit for service again and prevent further damage, Deutsche Bahn decided to stabilize the critical area of the tunnel with a concrete backfill. The TBM had to be left behind in the east tunnel. After a large area of concrete had been backfilled on the surface, the Rhine Valley Railway was opened again on October 2, 2017.

Further project information and status reports from the client are published at www.karlsruhe-basel.de. (German)