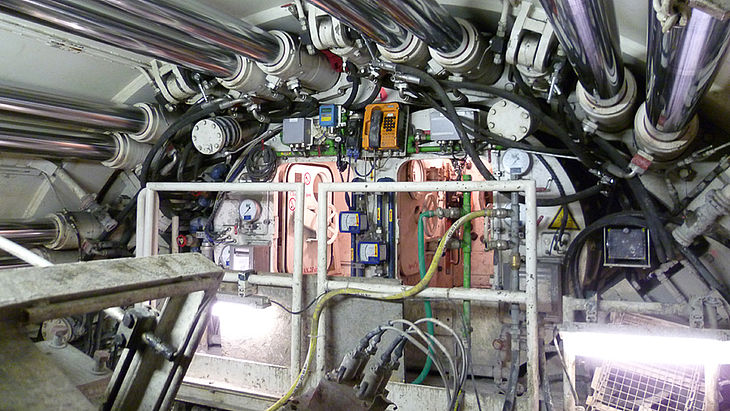 The north western metro in Prague is to be extended to Ruzyne Airport. The first, approximately six-kilometer-long Dejvicka-Motol section, with four new stations (Cerveny Vrch, Veleslavin, Petriny and Motol), is planned to serve the residential areas in the sixth district of Prague and link the biggest hospital complex in Prague, the Homolka and Motol Hospital, to the public transport network. Two Herrenknecht EPB Shields startet excavating two parallel tunnels in April and June 2011. The successfull breakthrough of both machines took place in November 2012.

The EPB Shields were designed according to the progosticated geological conditions along the tunnel alignment. The ground is characterized as clay slate and its weathering products. In adition to the clay slate, larger portions of sandstone, silt stone as well as clay stone have been forecast.

The design of the machines was focused on settlement control and, therefore, a system was implemented that recorded and analyzed a set of data, e.g. the support pressure and the backfilling. The recorded data were compared to reference and tollerance values and possible discrepancies were reported. With this security system, the Controlled Boring Process (CBP), changing geological and hydrological conditions with low overburden can be safely managed.

The tunnel was lined with concrete segments with a segment ring consisting of 5+1 segments of a length of 1.5 meters. The segments were cast in moulds produced by Herrenknecht Formwork and their design was in accordance with all relevant parameters, such as the water pressure and the ground characteristics as well as the processes of production, transport and installation in the tunnel.