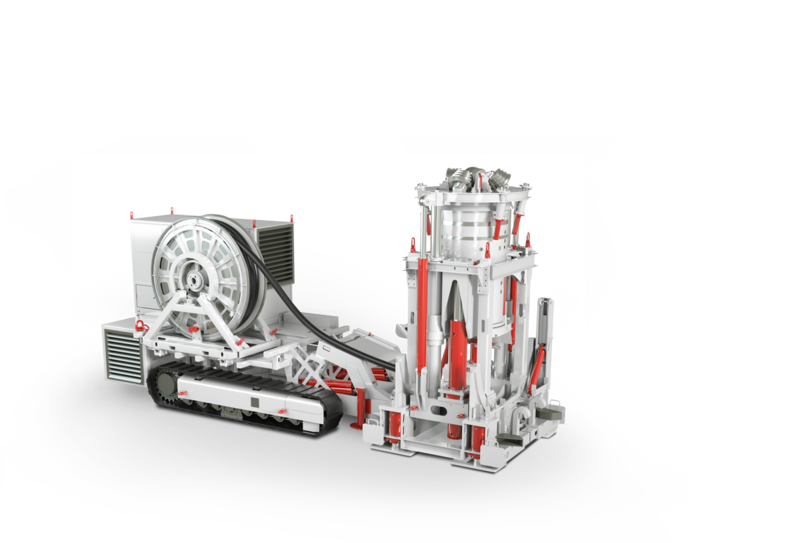 The BBM technology was developed by Herrenknecht for the rapid and safe construction of vertical and inclined raises or shafts, so-called slot holes. It can be used in stable rock formations and enables drilling diameters of up to 1.8 meters with a maximum drilling length of 70 meters. In developing this technology, a particular focus was placed on improved occupational safety, higher productivity and an optimum mobility of the rig. The time-consuming preparation measures required for conventional methods are no longer necessary.

Smart development based on proven technology

The concept of the Boxhole Boring Machine (BBM) is based on the field-proven pipe jacking technology. A drilling unit at the head of the pipe string is pressed forward from the launch point. Further jacking pipes are installed one after the other in the pipe string and pushed forward, thus lengthening the jacking route.

These innovative machines are designed for stable rock with compressive strengths of 180 Megapascal and more. A cutterhead excavates the rock at the tunnel face, which then falls through the center of the rig due to the force of gravity. The removed material is transferred to a muck chute at the jacking frame via channels introduced into the jacking pipes. From there the material can be transported out of the tunnel without problems. After each jacking stroke, the drilling process is stopped for a short time, to secure the pipe string and the drilling unit. Then the next jacking pipe can be installed in the jacking frame.

Flexible and rapid - borehole by borehole

Thanks to its compact design, the BBM can also be used under space constraints in gold, copper and other underground ore mines. The spectrum of application ranges from the excavation of ventilation shafts to the creation of ore passes for conveyance from the production level to the transport level. A crawler transports the machine quickly from one drilling location to the next. This mobility advantage and the high excavation performance contribute to significantly reduce the time required per completed raise or shaft, in comparison to conventional methods.