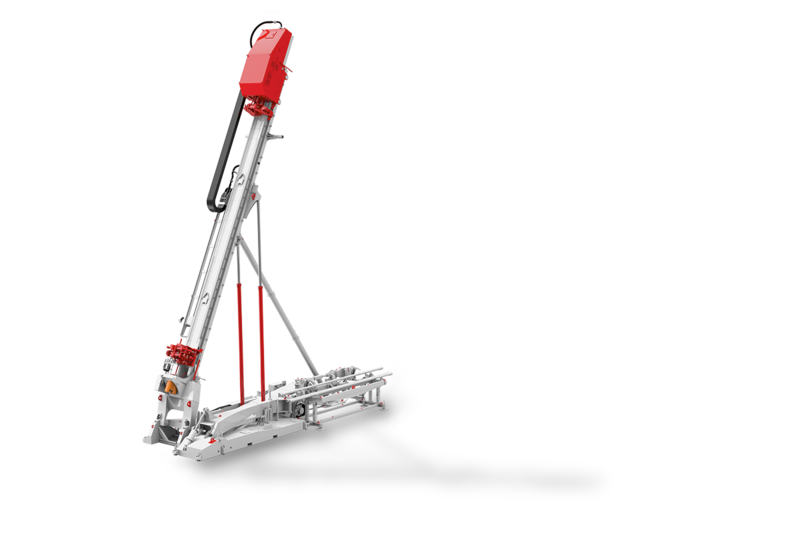 Method combination for the efficient exploration of oil and gas deposits

Herrenknecht's Slant Directional Drilling rigs (SDD) combine the advantages of two drilling methods that have proven themselves for years.  With the specially designed drilling technology, near-surface conventional or unconventional oil and gas deposits and geothermal energy can be developed safely and efficiently. SDD rigs are versatile and can work successfully in virtually all ground conditions.

Development based on decades of expertise

The outstanding feature of the SDD rigs is the wide range of possible entry angles: from a very shallow 8 degrees to vertical 90 degrees, so the depth required in the project is very quickly reached. Deposits at shallower depths, for example, can be reached in shorter time at an angle of entry of 30 degrees, since fast horizontal deflection is possible here for drilling further to the targeted deposit. Depending on the drill string and deflection, drilling depths of up to 2,000 meters can thus be reached.

With the rig's powerful hydraulic system, during ongoing drilling operations all operating parameters such as force, torque and speed can be precisely and steplessly adjusted to the current project conditions. The pipe handling system feeds the drill rods quickly and safely, allowing a tripping speed of up to 230 m/h. The thrust of the rack and pinion drive actively pushes the rod into the borehole, allowing much longer horizontal deflections than with conventional cable winch rigs. Thanks to the crawler unit the rig is ideally suited for difficult terrain and has a high degree of mobility, which facilitates quick changes between the drilling locations of a project.

No detours to energy deposits

In order to reduce dependence on conventional oil and natural gas deposits, the industry is increasingly focusing on alternative sources, such as smaller deposits and unconventionally extractable oils and gases. Herrenknecht's SDD rig is ideally suited for the development of coal seam gas (CSG) or oil sands, which in the USA, Canada and Australia, for example, are now a significant part of national production volume.

Here conventional methods must first sink a vertical borehole, followed by a second borehole which follows the coal layer horizontally. Depending on project conditions, this procedure must be repeated several times. By contrast, with entry angles of between 8 and 90 degrees, SDD rigs make it possible to quickly drill to the required depth and then directly deflect the same borehole horizontally. With the powerful rack-and-pinion drive, the SDD rig drills significantly longer horizontal deflections and thus increases the efficiency of the bore compared to conventional rigs with a cable winch, especially in assisted drilling.

In addition to oil and gas projects, the strengths of Herrenknecht's SDD rigs come to the fore wherever drilling projects require entry angles to be flexibly adapted specifically to the project: such as for outfall and intake drilling in the areas of water and sewage or for small hydropower plants. A relatively new area of application is the development of geothermal energy, which is used, for example, for heating and cooling residential and industrial buildings or greenhouses and for generating electricity.