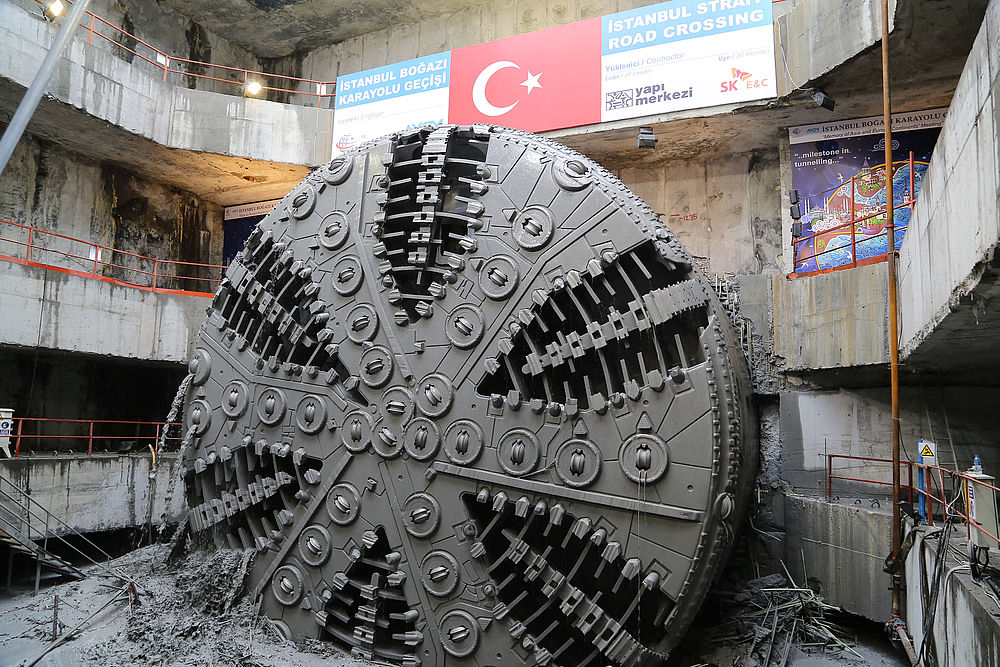 A giant dives deep and brings Europe and Asia together

PDF Download
Share on
Last Saturday, August 22, 2015, a high-level audience experienced the ultimate breakthrough of one of the boldest tunnel missions ever. In the afternoon, before the eyes of the Turkish Prime Minister Ahmet Davutoğlu a Herrenknecht Mixshield with an excavation diameter of 13.7 meters pierced the target shaft wall on the European side of the mega city Istanbul exactly to plan. After 16 months of tunnelling under the Bosphorus Strait, the emergence of the drilling giant was an engineering and emotional triumph for the building contractors, Turkish-South Korean joint venture Yapı Merkezi as leader and SK Engineering & Construction. Launched from the Asian side, with water pressures up to 11 bar the 3.34 kilometer long underpass for the two-story Eurasia road tunnel was a huge endurance test for ultra-modern tunnelling technology. Company founder Martin Herrenknecht and his engineers also cheered at the sight of the cutterhead in the target shaft. The successfully completed drive marks new feasibility standards in tunnel construction. In Istanbul the new road tunnel will provide major relief of traffic congestion on the strait crossing.
Istanbul / Schwanau, August 28, 2015. In global tunnel construction, few projects are crowned with the superlative "epoch-making". Built with an excavation diameter of 13.7 meters, the Eurasia road tunnel in Istanbul, a crossing beneath the Bosphorus totaling 5.4 kilometers in length, does this accolade justice in many ways. Back in the 19th century already, the visionary Sultan Abdülmecid I, ruler of the Ottoman Empire, pushed the planning of a tunnel under the strait. This proved to be impossible, however, with the means available at the time. As in the afternoon of last Saturday, after 16 months of tunnelling the Herrenknecht Mixshield pierced the target shaft wall of the Eurasia Tunnel on Istanbul's European side with millimeter precision, Turkish Prime Minister Ahmet Davutoğlu witnessed and marveled the finale of a historic construction achievement. Never before has such a large, high-performance tunnel been built underground under such complex and extreme conditions.
The carefully planned and now successfully executed arrival of the 120-meter long tunnel boring machine is both an engineering and an emotional highlight for all "builders" involved in the epoch-making project, in particular for the Yapı Merkezi and SK Engineering & Construction joint venture. The founder of Yapı Merkezi and Chairman of Yapı Merkezi Holding, Dr. Ersin Arıoğlu, together with Dr.-Ing. E.h. Martin Herrenknecht, founder and Chairman of the Board of Herrenknecht AG, and their engineers experienced the final project breakthrough as a special moment side by side. It will have a signal effect in global tunnelling because new feasibility standards have been established in the construction of tunnels under extreme ground conditions. "I believe, with today's results, this project will pioneer and encourage tunnelling circles to deeper, farther and larger." states Dr. Ersin Arıoğlu.
The bold mission with the unique 3,300 tonne machine specially designed in Schwanau was launched in April 2014. It started from a gigantic launch structure on the Asian side at the south-eastern end of the Bosphorus. With a gradient of five percent the large-format Mixshield tunneled down to the deepest point 106 meters below the Bosphorus. There the water pressure was 11 bar. Combined with a very changeable, wear-intensive underground, this places extreme demands on the giant cutting wheel's excavation tools. This necessitated a range of different safety features that, trialed in previous undertakings and further developed for pioneering projects, only Herrenknecht can provide.
"The particular challenge was to develop a cutting wheel that allows safe replacement of the excavation tools from the inside even with the huge external pressure," explains Werner Burger, Head of Engineering at Herrenknecht. The result: a cutting wheel accessible from the rear through narrow working chambers. The tools can thus be changed safely by the crew through special lock systems under atmospheric pressure conditions. In addition the TBM was fitted with special equipment for the use of saturation divers. "In the course of the advance all the equipment has proven itself for maintenance and repair work," says Burger.
Thanks to the pioneering technology and the ideal cooperation of all project partners, the TBM achieved excellent top performances under the Bosphorus of up to 92 meters per week. "State-of-the-art technology is one of many puzzle pieces. More decisive, however, was our unshakeable willpower and mutual trust in each other. Only through these have we jointly achieved the breakthrough in this exceptional project," Martin Herrenknecht emphasized. "Being here today is like a dream come true for me," added Yapı Merkezi Chairman Başar Arıoğlu proudly at the breakthrough ceremony. From late 2016 around 100,000 cars a day are expected to cross between the continents in the Eurasia Tunnel on two roadways one above the other. The new tunnel infrastructure is the first direct link between the historic Golden Horn peninsula on the European side and the port area on the Asian side. It will provide decisive relief of the chronically congested traffic in Istanbul and reduce the journey time from currently 100 to just 15 minutes.
Explore the pioneering teamwork at the epoch-making Eurasia Tunnel project in the 4th issue of our digital magazine All Around.
PDF Download
Share on