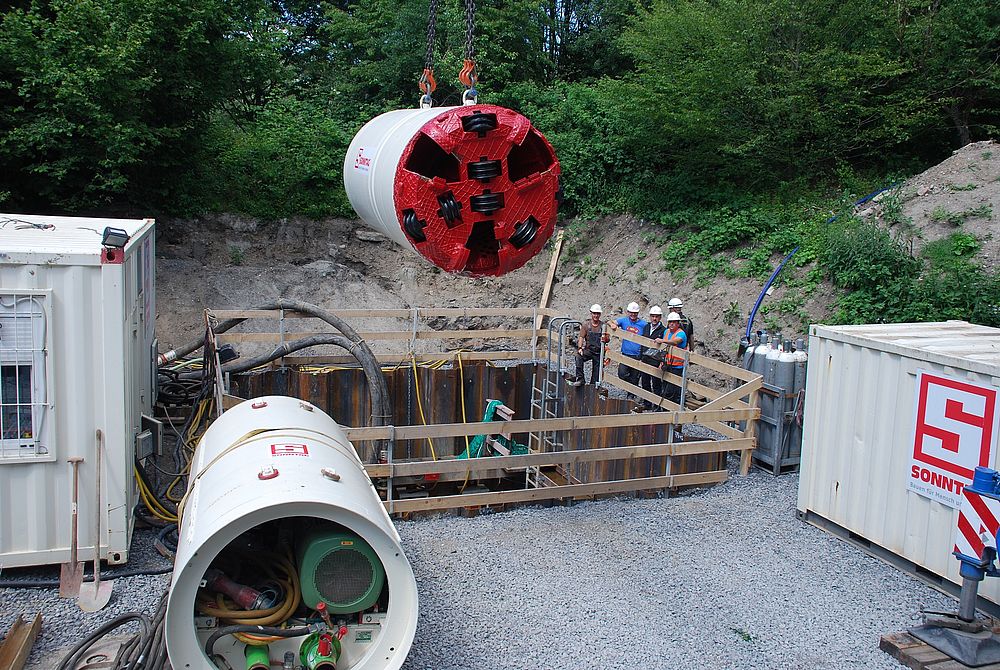 PDF Download
Share on
At the moment, intensive underground works are being carried out in downtown Karlsruhe. The contractor SONNTAG Baugesellschaft mbH & Co. KG headquartered in Dörth near Koblenz (Germany) has already created facts: Using a Herrenknecht micromachine (type AVN1200TB) several pipelines could successfully be laid near the inner-city train station area within a couple of weeks.

Karlsruhe/Schwanau, Germany, August 25, 2014. Along the microtunnelling alignments, settlement-prone obstacles had to be crossed such as highways, multi-track railway lines or the little "Alb" creek. The short crossing of the creek proved to be particularly challenging: Due to the altitude of the sewage system, the coverage between the alignment and the creek bed was only 10 centimeters. To prevent the tunnel from floating after completion of the works, SONNTAG installed particularly heavy steel-reinforced concrete pipes under the creek bed. Works along the 110 meter long drive in non-cohesive geological conditions (mostly gravel and sand) ran very smoothly. Due to optimum jobsite logistics, the pipeline could be installed underground in only 48 hours using a two-shift system. By the end of July 2014, the AVN1200TB completed a total of 600 meters in 6 drives for the expansion of the sewage system in Karlsruhe.

In Europe, Herrenknecht has been working closely together with SONNTAG for more than 25 years in the field of Utility Tunnelling. "In Cologne, we were working together on one of our first microtunnelling jobs in the early nineties using one of the first micromachines that Herrenknecht designed", said Bernd Sonntag (CEO). "Since then, we have been relying on Herrenknecht technology in many other projects."

In Karlsruhe, it will remain interesting. A large Herrenknecht machine will start boring its way through Karlsruhe's underground at the end of the year. The Mixshield (Ø 9.2 meters) will drive a light rail tunnel with a length of approximately two kilometers as part of the Project "Kombilösung Karlsruhe". The TBM will be operating downtown underneath Kaiserstraße in challenging geological conditions. For more information please visit: http://www.diekombiloesung.de/startseite.html.