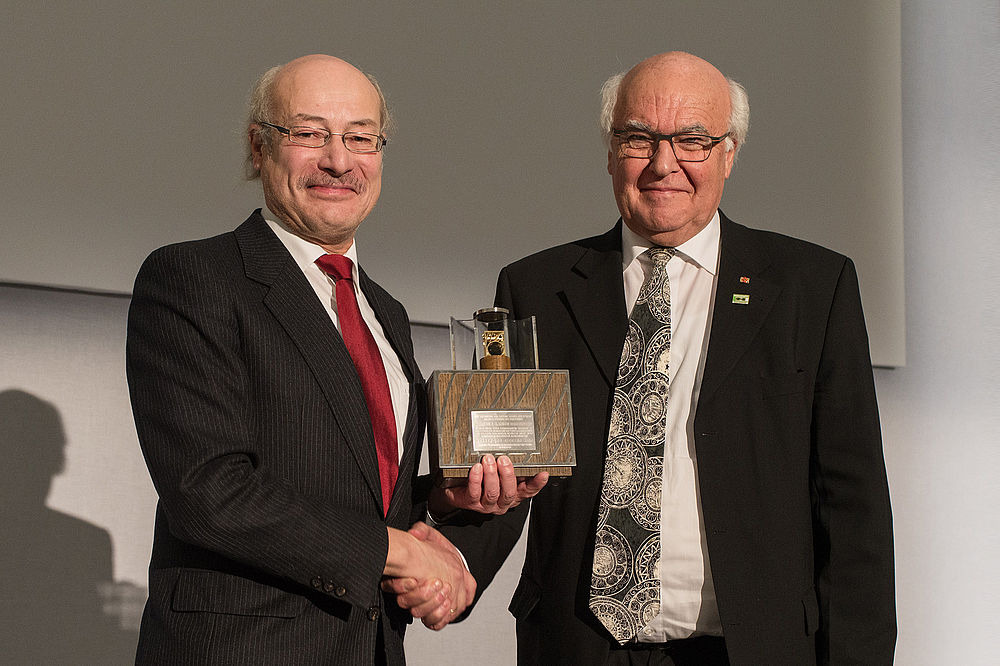 December 14, 2016, Schwanau / Berlin, Germany. The entrepreneur and engineer Dr.-Ing. E.h. Martin Herrenknecht can look back on a remarkable range of personal honors and awards. Tuesday saw him receive a special token in the presence of a high-profile audience in the form of a festive award of the Werner von Siemens Ring in the Berlin-Brandenburg Academy of Sciences and Humanities. Prof. Dr. Joachim Ullrich, the Chairman of the Foundation Council and President of the Physikalisch-Technische Bundesanstalt, presented him with his Werner von Siemens Ring. It is a unique item designed and produced by Michael Berger, a kinetic jewelry designer and renowned master goldsmith, who was commissioned by the Foundation.

Around 250 guests representing the areas of science, business and politics took part in the festive event at the historic Gendarmenmarkt, eager to witness the presentation of the prestigious prize. The official speech was given by Nobel prizewinner and chemist Prof. Dr. Stefan Hell. In the greeting of Sigmar Gabriel, Germany's Vice-Chancellor and Federal Minister for Economic Affairs and Energy, Martin Herrenknecht's achievements were also praised. "To ensure that we can also continue to set standards with innovative products in the future, we need strong research facilities, strong companies and lively exchange. As the manufacturer of the world's largest tunnel boring machines, Dr. Martin Herrenknecht is an exemplary figure in these areas: he is an inventor and founder, a technical pioneer and an entrepreneur, and with the success displayed by his company, he is one of the representatives of this country's economic strength."

In a laudatory speech about the ring bearer Martin Herrenknecht, Prof. Dr.-Ing. E.h. Manfred Nußbaumer M. Sc., member of the Foundation Council at the Werner von Siemens Ring Foundation and former chairman of the Board at Ed. Züblin AG, confirmed the particular technical courage and entrepreneurial pioneer spirit displayed by the entrepreneur and engineer from Baden-Württemberg. "You have repeatedly broken new ground. Every time we met, I was amazed at the energy with which you pursued your goals and the wide range of possible solutions at your disposal for excavating tunnels", said Nußbaumer, as he reminisced about shared project experiences and encounters. With a variety of groundbreaking innovations and optimizations of existing technology and methods, the Herrenknecht company has swiftly assumed the role of international market leader. "By receiving the Werner von Siemens Ring, I would imagine that this is the icing on all of his awards to date", stated Nußbaumer in his laudation.

Dr.-Ing. E.h. Martin Herrenknecht received the award with particular pleasure: "I was surprised to receive this honor. Especially when I consider the impressive range of ring bearers to date. Without the substantial support given by my mother when establishing the company, without the untiring understanding of my family given to me as an entrepreneur, and without the fantastic commitment by my engineers and employees all over the world, I would most likely never have been considered for the Werner von Siemens Ring", claimed Martin Herrenknecht, as he spoke to the around 250 guests in the Academy's Leibniz Room. "Scientists, inventors and entrepreneurs have a special privilege and a genuine responsibility as we are capable of bringing beneficial progress to many key challenges. Although new tunnel infrastructures and tunnelling technology are only a small excerpt thereof, this award means that they will also be attributed special acknowledgement by science", added the entrepreneur from Baden.

In almost 40 years of its corporate history, Herrenknecht has mastered more than 3,100 tunnel projects in over 80 countries in close collaboration with its customers. These include the largest, longest, smallest and deepest projects - with progress regularly marked by new records and milestones.

Opened a year ahead of schedule and within budget, the Gotthard Base Tunnel in Switzerland is regarded as a truly epoch-making construction. Over a period of 8 years, four Herrenknecht Gripper TBMs bored and secured more than 85 km of new tubes for the railway tunnel which went into regular operation in December 2016. In Istanbul, pioneer work was achieved by man and machines until August 2015 in an effort to build a tunnel link between Europe and Asia. The Eurasia road tunnel under the Bosporus to be opened this year links two continents and is regarded as a milestone in engineering and construction. Never before had a tunnel borer worked under such extreme conditions: 106 meters under the strait, the Mixshield with a diameter of 13.66 meters steadfastly withstood pressures of up to 11 bar despite the most difficult geological conditions. In Doha, the capital of Qatar, a championship team of international tunnelling experts offered a superlative performance featuring 21 EPB Shields supplied by Herrenknecht. In a mere 26 months, the construction crews completed a total of 76 breakthroughs along the 111-kilometer tunnel alignments - a pioneer achievement which outshines any other metro tunnel project in the world up to now. A supersized Herrenknecht TBM started its mission in Hong Kong in 2015. Weighing in at 4,850 tons and with a diameter of 17.6 meters, the giant Mixshield is the largest TBM ever built to date and completed 646 meters of mega-tunnel tube for a new road tunnel under the Pearl River Delta in less than 8 months. Another technical feature: After the breakthrough into an intermediate shaft, it was possible to convert the record-breaking colossus to a boring diameter of 14 meters thanks to its intelligent design. The core components of the large TBM were integrated into the smaller machine for the remaining tunnel route.

More information on the milestones in mechanized tunnelling

For 100 years, the Werner von Siemens Ring Foundation has been awarding the Werner von Siemens Ring for outstanding life achievements in technology. The list of prizewinners is a reflection of historical technical developments and a testament to Germany's significance as a technology location. Recipients include, for example, the aircraft engineer Hugo Junker, the inventor of the first functional computer Konrad Zuse and the rocket designer and founder of manned spaceflight Wernher von Braun. The German President is the patron of the Foundation.

Martin Herrenknecht has already received a wide range of awards and prizes, including the Cross of Merit, 1st Class of the Order of Merit of the Federal Republic of Germany as well as the German Entrepreneur's Prize (Deutscher Gründerpreis) 2013 in the category "Life's Work". Renowned technical universities have awarded him an honorary doctorate or appointed him honorary senator.