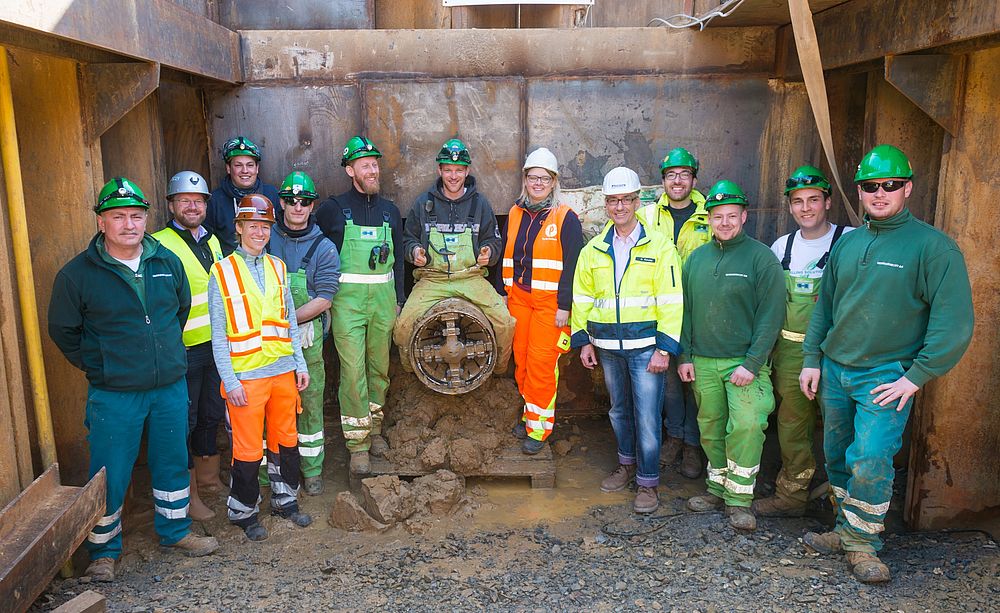 Together with grid operator Amprion and RWTH Aachen, tunnel specialist Herrenknecht has developed the innovative E-Power Pipe® microtunnelling technology. The project receives funding from the German Federal Ministry of Economics and Energy. The new method combines proven drilling technologies and systematically develops them further so that in future underground cables can be laid trenchlessly over long distances at shallow depths of two to four meters and with minimal intervention in the landscape. For this almost fully automated drilling technology Herrenknecht has been awarded the Baden-Württemberg Environmental Technology Award.

Board of Management member Ulrich Schaffhauser accepted the award on behalf of the company. "We are especially pleased to receive the Special Award of the Jury. The E-Power Pipe® method is a ground-conserving alternative that can play its part in making the energy transition a reality. It closes a technical gap," stressed the responsible Herrenknecht Board of Management member for the Business Units Utility Tunnelling, Mining and Exploration.
The new method has numerous advantages over open-cut construction: since E-Power Pipe® significantly reduces surface interventions, in future longer sections will also be able to be laid in this small diameter range without open trenches. Earthworks are only necessary in the vicinity of cable connection points. Impacts on people and the environment are thus kept as low as possible, so that acceptance of the necessary alignments is increased.
The AVNS 350XB tunnel boring machine used for the method has an excavation diameter of 505 millimeters and is designed for drive lengths of up to 1,500 meters. Control software ensures the precise positional accuracy of the installed protective pipe in any geology so that existing infrastructure such as pipelines, roads, railways or smaller bodies of water can also be easily crossed under. The fully remote-controlled tunnelling machine is equipped with a jet pump as the slurry pump as well as an integrated hydraulic unit and improved control and navigation systems. The use of a jet pump for the handling of the excavated material means it is now possible to achieve up to 10 times longer drive lengths in the small diameter range than before and with a higher speed of up to 10 meters per hour.
In spring 2017 already, at a pilot project in Borken, Herrenknecht was able to demonstrate the capabilities of E-Power Pipe® with daily best performances of 126 meters of advance and 266 meters of retraction of the protective pipe. Three parallel holes, each 300 meters in length, were bored at a shallow depth for the installation of HDPE pipes for later cable insertion. Based on the findings, optimizations were able to be implemented such as a gyro compass, additional steering articulation for curve drives as well as improved connections of the steel jacking pipes for shorter attachment times. The launch of the technology on the market is planned for this summer.
Every two years the Baden-Württemberg Ministry of the Environment, Climate Protection and the Energy Sector presents the Baden-Württemberg Environmental Technology Award for innovative products and methods in environmental technology. The Special Award of the Jury is based on current environmental policy challenges and technical requirements.
PDF Download
Share on