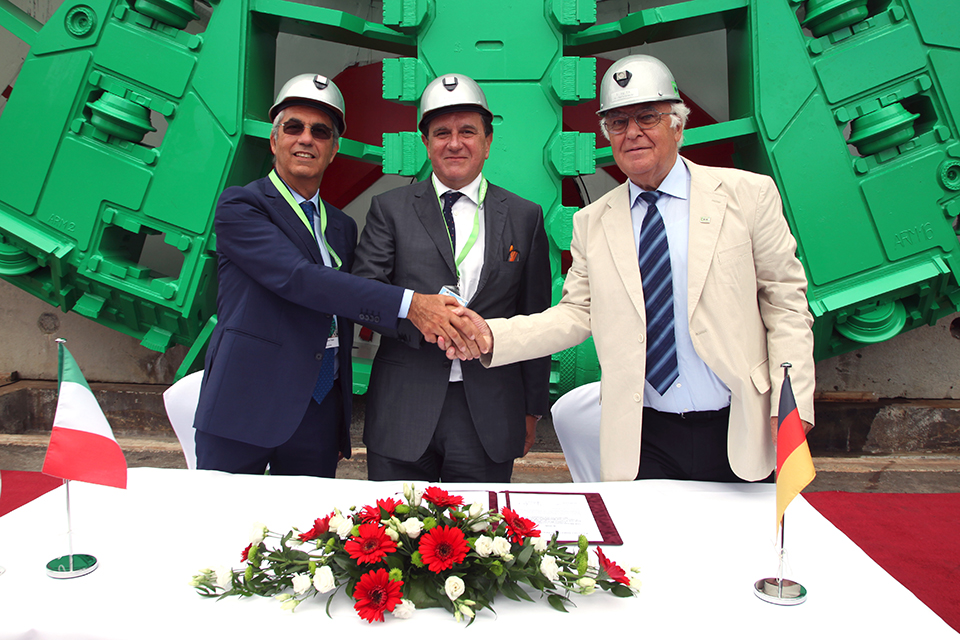 PDF Download
Share on
The new titan among European tunnel boring machines has been completed: the TBM for the Santa Lucia Tunnel in the Apennines has a diameter of 15.87 meters. It towers above the previous European record holder by more than 20 centimeters and is the largest machine ever made at the Schwanau plant. The technical acceptance of the EPB Shield took place in late August.

Schwanau, August 29, 2016. Assembled in Schwanau in just a few months, with a diameter of 15.87 meters the tunnel boring machine for the Santa Lucia road tunnel is an impressive sight. In the next three years the 4,800 tonne drilling giant will build a 7,528 meter tunnel in the Apennines near Florence – and takes over from the existing record holder for size, which was also used in Italy (EPB shield for the Galleria Sparvo, diameter 15.62 meters). On completion of the record breaker a comprehensive technical acceptance took place on August 29, 2016. The highlight was the turning of the massive cutting wheel (410 tonnes), which, equipped accordingly, will burrow through the heterogeneous subsoil. The TBM customer, construction company Pavimental S.p.A., representatives of client Autostrade per l'italia S.p.A. as well engineers and the Board of Herrenknecht AG inspected the machine thoroughly and with some pride.

Together with the now completed TBM, in the near future 13 Herrenknecht tunnel borers will be operating in Italy – in particular the larger formats. Eight of them have a diameter of more than 8 meters. Major projects such as the construction of the Autostrada A1 create modern, new infrastructures. In mountain ranges such as the Apennines, tunnels are part and parcel of the realization of safer and more efficient traffic arteries. On the A1 new-build route alone a total of 44 new road tunnels are planned – including the Santa Lucia Tunnel. In future the journey time from Bologna to Florence will be reduced by 30% thanks to the new build. The route will be opened to traffic in 2019.