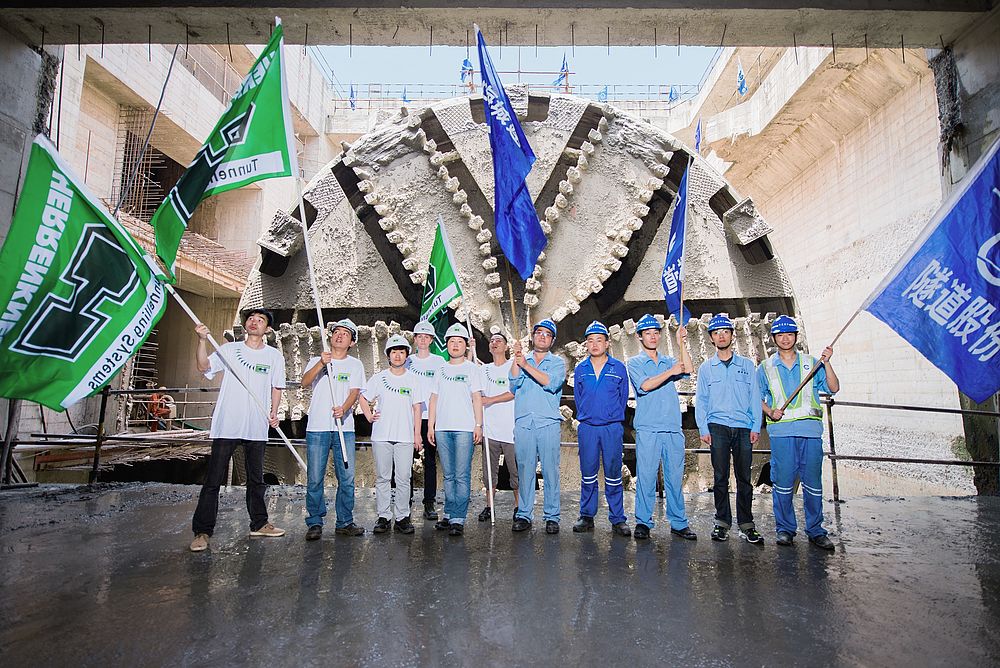 Yangtze River Delta, China / Schwanau, Germany, February 19, 2014. The Yangtze River Delta in East China developed rapidly to become one of the largest urban areas in the world. Accordingly, expansion of the infrastructure is progressing quickly too. In this connection numerous lakes and rivers need to be crossed under and over. In 2013 four breakthroughs by Herrenknecht tunnel boring machines (TBMs) marked milestones in large tunnel construction in the region. On difficult crossings under rivers the high-tech machines demonstrated the efficiency and reliability of Mixshield technology from Herrenknecht.

"The Flying Dragon" became the nickname of the S-668 in Nanjing after it had impressed the Metro Line 10 site crew with its speed. The Herrenknecht Mixshield with a diameter of 11.61 meters crossed below the Yangtze River at up to 240 meters per week. On May 10, 2013, under the guidance of the site crew of the China Railway 14th Bureau Group, the machine successfully reached the target shaft.

The route ran along a length of 3.6 kilometers and at a depth of up to 58 meters below the water surface of the Yangtze River. Earth and water pressure of up to 6.5 bar weighed down on tunnel and machine. Herrenknecht engineers equipped the cutting wheel with special cutting wheel arms that are accessible at atmospheric pressure from the rear area of the shield. The cutting tools in the cutting wheel could thus be changed safely and economically while avoiding costly accessing in compressed air.

The China Railway 14th Bureau Group ordered the large diameter Mixshield S-668 in order to cross under the Yangtze River for Line 10 with a double-track tunnel instead of two single-track tunnels. The project success in Nanjing combined a number of superlatives in metro tunnelling under rivers in China: the longest tunnelling sector, the greatest depth, the highest ground water pressure as well as the largest diameter.

The annual, up to nine meters high tidal wave of the Qiantang River at its mouth on the East China Sea is a tourist attraction. A road bridge for the much-needed link between the northern and southern highways threatened to disrupt the view of the national attraction. The planners in Hangzhou therefore opted for mechanized tunnelling with one of the world's two largest Mixshield tunnel boring machines. Tunnelling precision was required during drilling, because dam installations on the banks of the Qiantang protect the city of Hangzhou from flooding by the spring tide from the ocean. The dams were not allowed to be damaged under any circumstances. The customer therefore relied on the safe Mixshield technology from Herrenknecht.

After the start of tunnelling, the TBM crossed under the Qiantang twice over a length of 3.25 kilometers and at a depth of up to 27.6 meters. With the breakthrough on January 18, 2013 the Mixshield S-593 with a diameter of 15.43 meters completed its work with optimum values: with a maximum of 2.36 centimeters, all subsidence measurements on the ground surface remained well within the limits defined by the authorities. The site crews of Shanghai Tunnel Engineering Co. Ltd (STEC) achieved rates of up to 464 meters per month.

Extreme precision was a priority during the advance of the Mixshield S-569 in Shanghai for the construction of two three-lane road tunnels. In the 15 million inhabitant, densely built up mega metropolis, it gets cramped underground as well. The Mixshield TBM with a diameter of 15.43 m drilled its way forward with only one meter leeway between the foundations of urban highway and railway line before it dived under the Huangpu River. The drilling specialists of STEC used a system for precise real-time monitoring of the shield position to handle the 40-meter long passage. With the same precision and safety, passing beneath 30 buildings was mastered as well as the advance in the immediate vicinity of 20 underground supply lines. With the breakthrough on June 19, 2013 the second of the two largest Mixshield machines in the world successfully completed its work in Shanghai.

Also in Shanghai, a few kilometers upstream from the "West Changjiang Road River Tunnel", the Herrenknecht Mixshield S-666 is in operation. With a diameter of 14.9 meters it is creating the longest and deepest lying road tunnel under the Huangpu River. Over 3.4 km the TBM is achieving advances of up to 132 meters per week at depths of up to 59 meters below the water surface. After the first breakthrough on July 8, 2013 the STEC site crew checked all machine components and replaced necessary wear parts. Since December 28, 2013 the tunnel builders have been advancing the second tube in the opposite direction.

Herrenknecht has the world's highest density of references in successful project completions for large and very large tunnel cross sections. Over 300 kilometers of tunnels with diameters greater than 11 meters have already been successfully driven with Herrenknecht technology.