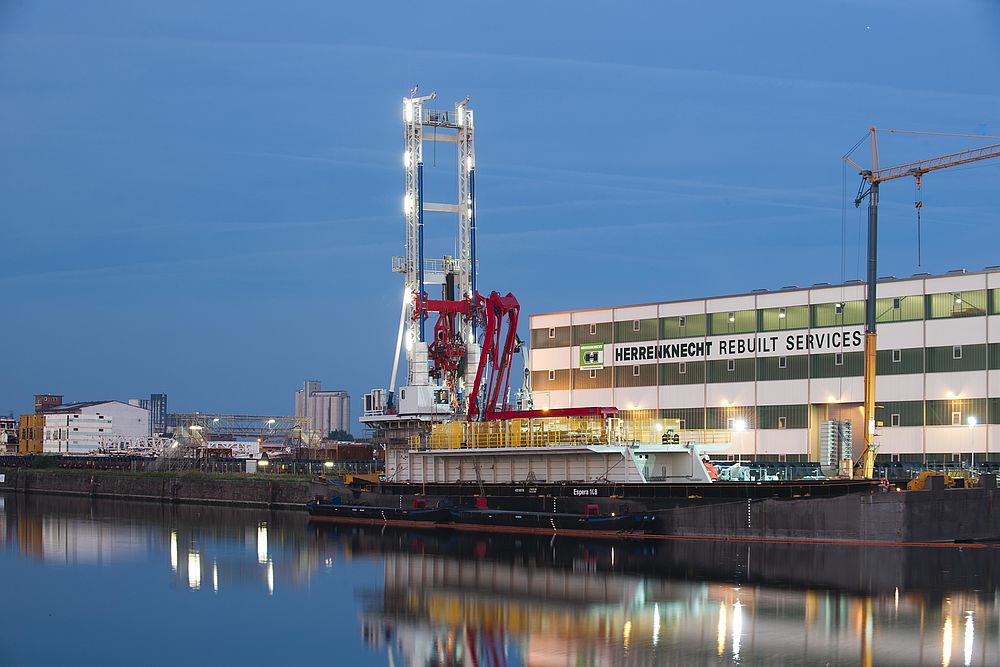 First job in the North Sea for Deep Drilling Rig

An innovative, powerful and highly automated deep drilling rig from Herrenknecht Vertical GmbH has been assembled on a cantilever at the Herrenknecht site in the port of Kehl (southern Germany) in the past months. This innovative, self-supporting cantilever drilling rig which belongs to a floating lifting platform (jack-up barge) will carry out workover operations or drill new oil and gas wells in the North Sea.

Schwanau/Kehl, October 01, 2010. The new Dutch drilling company “SWIFT DRILLING BV" has commissioned the development and construction of the new “Terra Invader 250CL” drilling rig that will be part of the SWIFT #10 jack-up drilling unit. Offshore experts from SWIFT DRILLING and engineers from Herrenknecht Vertical GmbH have been working together to create the basis for the construction of a light-weight and powerful cantilever rig which allows highly automated drilling operations. Final acceptance of the drilling rig by the owner took place in mid-September 2010. In the next five years, the rig will be used for oil and gas drilling for Shell and NAM (Nederlandse Aardolie Maatschappij BV) in the UK and Netherlands sectors of the southern North Sea. After dismantling the new cantilever drilling rig in Kehl port, it will be transported on the Rhine to the port of Rotterdam. After its arrival, it will be mounted by experts on a highly-modern jack-up barge (floating lifting platform). From 2011 onwards, the unit will carry out workover operations on existing wells in oil and gas fields in the North Sea, drill new subsea wells or new wells on existing stationary production platforms.

During the concept and design phase of the innovative drilling rig, the very demanding operating and safety standards for offshore use in the North Sea played an important role. Moreover, the Herrenknecht “Terra Invader 250CL” sets new standards for safe and efficient drilling and production operations. Herrenknecht deep drilling rigs generally excel by their hydraulic-supported working method and their core components. The hydraulic cylinder hoist system, for example, allows for particularly accurate and safe vertical drilling operations. The supply and return of the drill pipes and casings from and to the store on the drilling unit, necessary during drilling and casing, is carried out to a large degree automatically. The “hands-off” pipe handling makes sure that, in general, no personnel need to work in dangerous areas. Thus, personnel on the drilling platform can be reduced, occupational safety can be increased significantly and the necessary flexibility during the drilling process can be maintained. This drilling rig, which is designed comparably light with a hook load of 250 tonnes, can drill down to depths of 5,000m for slim hole wells.

Technical acceptance of the new deep drilling rig by the contractor “SWIFT DRILLING BV” took place successfully in mid-September 2010 in the port of Kehl, where Herrenknecht operates a state-of-the-art service center for the assembly of components. With the delivery of the new cantilever rig, Herrenknecht Vertical GmbH has taken its first step in the offshore business for the exploration of oil and gas.