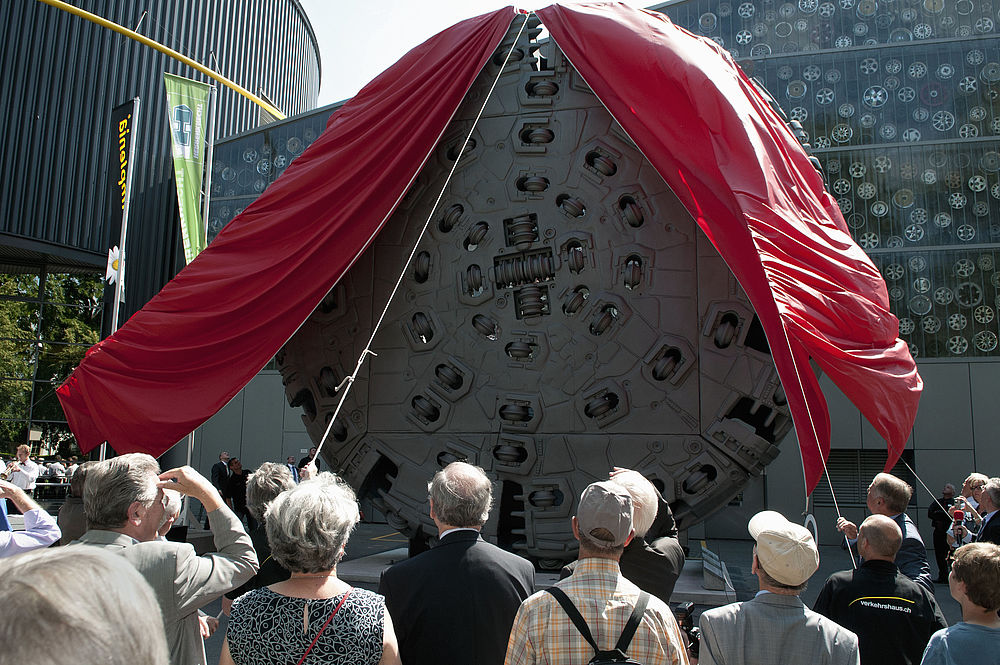 PDF Download
Share on
Gotthard "Sissi" Cutterhead as a witness in the Swiss Museum of Transport in LucerneAfter the successful and much-celebrated breakthrough in the Gotthard Base Tunnel project of the century in Switzerland, the original cutterhead of the Herrenknecht "Sissi" gripper tunnel boring machine can now be seen by the general public. The festive unveiling and presentation to the Swiss Museum of Transport took place on Saturday, June 23, 2012.

Lucerne, Switzerland / Schwanau, Germany, June 25, 2012. On October 15, 2010, at exactly 2.17 pm, the "Sissi" tunnel boring machine broke through the eastern tube of the new Gotthard Base Tunnel of the New Railway Link through the Alps (NRLA). After commencing tunnelling in 2003, the Gotthard miners were finally able to shake hands in the 57-km railway tunnel – the longest in the world – and write transport history at the same time. Sissi's breakthrough received enormous attention at the time: more than 2,500 online articles reported on the event and a photo of the breakthrough appeared on the front page of the New York Times. Since June 23, 2012, the Sissi cutterhead has been welcoming visitors at the entrance portal of the renowned Swiss Museum of Transport in Lucerne.

Within the framework of the festive handover, Martin Bütikofer, Director of the Swiss Musuem of Transport, thanked Herrenknecht and Implenia as sponsors as well as all of the other supporters for presenting and preparing this unique exhibit. Dr.-Ing. E.h. Martin Herrenknecht, Chairman of the Board of Management at Herrenknecht AG, is delighted that a piece of the world record performance at the Gotthard Base Tunnel can be experienced by the public in general – thereby also representing the outstanding team performance and ultra-precise tour de force by man and machine. "The fact that the Swiss relied on Herrenknecht technology is the greatest compliment we could possibly receive as a company", explains Herrenknecht. The two 57-km tunnel tubes are scheduled to open in 2016. This world record feat was made possible by a democratic vote by the Swiss in 1992 when they approved the major NRLA project to build a fast and efficient high-speed railway route along the north-south axis benefiting Switzerland and Europe alike. Adolf Ogi, Swiss Transport Minister from 1988 through 1995 and therefore one of the fathers of the NRLA, is certain that "the investments in public transport will pay off in the long term". Moreover, the NRLA is also an act of solidarity in protecting the Alps. Designed as a flat rail route, the two single-track tubes in the Gotthard Base Tunnel run at up to 2,300 meters under the imposing Alps – a tremendous rock overburden with a corresponding influence on tunnelling. In order to save time, several sections were worked on simultaneously. Four Herrenknecht gripper tunnel boring machines produced more than 85 kilometers of the main tunnels.

The Sissi cutterhead now on display was deployed for three years on the Faido‒Sedrun section in the eastern tube for the Arge TAT (AlpTransit-Ticino Tunnel) coordinated by Implenia. The TBM had an overall length of 450 meters. This gigantic machine pushed each of the 66 disc cutters against the rock exerting a pressure of up to 26 tonnes to crush the rock. After the breakthrough, the TBM was dismantled and transported in segments back through the rear of the tunnel – parallel to final completion of the tunnel tubes. The cutterhead was then refurbished so as to retain its original condition even when exposed to weathering on the exhibition campus. A model of a gripper tunnel boring machine and other key items involved in building the Swiss railway tunnels can be seen in the Rail Transport Hall at the Swiss Museum of Transport.