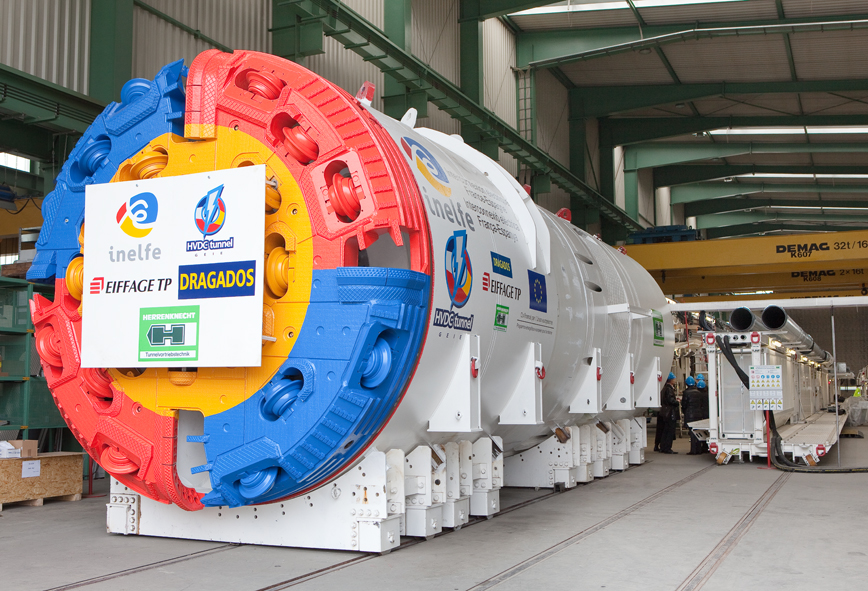 Hard Rock TBMs are cutting tunnels through the Pyrenees

PDF Download
Share on
Two high-tech Herrenknecht tunnel boring machines completed an endurance test with bravura during long-distance tunnelling through the Pyrenees. After a total of 8.2 kilometers tunnelling through hard rock, the finish line was reached with the final breakthrough in April 2013. The resulting cross-border tunnel project will be used for a high-voltage line to connect the French and Spanish electricity network with each other.

Schwanau, Germany / Montesquieu-des-Albères, France, August 27, 2013. The Herrenknecht tunnel boring machines "Canigou" and "Alberas" are compact powerhouses: Equipped with an installed power of 1,250kW, they have a torque of 2,000kNm with a cutterhead diameter of 4.3 meters. The tunnel boring machines have a length of 301 and 253 meters respectively and weigh 620 tonnes. The Double Shield TBMs started at their launch portals in March and October 2012 to excavate and line the 8.2km long tunnel through the hard rock of the Catalan Pyrenees. "Alberas" begun its mission in La Jonquera in Spain. "Canigou" advanced towards its sister machine from Montesquieu-des-Albères in France.

The two Double Shield TBMs from Herrenknecht were ordered by the Franco-Spanish joint venture, consisting of the tunnelling specialists Eiffage and Dragados. The challenge was to create an ambitious tunnel project within a demanding time frame.
After 1.23 kilometers of tunnelling, "Canigou" reached the end of the lot, coming from France beneath the Massif des Albères, in March 2013. The "Canigou" machine was immediately dismantled in the protection of a tunnel section in stable rock without segmental lining under the supervision Herrenknecht of specialists. After 7.01 kilometers of tunnelling "Alberas", coming from Spain, drove into the tunnel excavated by "Canigou" already on April 22, 2013, and the breakthrough was celebrated in superb style. The best performance of the overall project was achieved by the tunnelling teams with the Herrenknecht TBM "Alberas" on the Spanish side: 53.5 meters per day with up to 1,040 meters excavated and lined tunnel per month. "Alberas" was also dismantled in the bored tunnel, and the components were removed through the north portal. The physical connection for the exchange of electricity is thus completed.

The cross-border power lines that connect Spain with France and the rest of Europe need to be upgraded urgently. The four existing connections do not have sufficient capacities to cope with bottlenecks or to compensate for fluctuations resulting from the use of renewable energy sources. As part of the bi-national project "INELFE" (INterconexión ELéctrica Francia-España) a 64.5km long, ultra-modern high-voltage direct current transmission link (HVDC) is being installed from Baixas, near Perpignan in France to Santa Llogaia near Figueras in Spain. In the tunnel excavated by the two Herrenknecht tunnelling machines, the route passes under the Pyrenees on the Catalan Mediterranean coast.

Herrenknecht is the world's number 1 in mechanized tunnelling technology, including hard rock tunnelling. Double Shield TBMs from Herrenknecht are specialists for high advance rates in hard rock. They combine the functional principles of the Gripper TBM and the Single Shield TBM in one machine. This combination of methods allows the installation of concrete segments in stable geological conditions parallel to the excavation work, thus achieving very high advance rates. Lining the tunnel with segments contributes significantly to the high quality and durability of the structure.
For the "INELFE" project Herrenknecht prepared the back-up systems of the two machines for double storage: Logistics and storage facilities were designed in such a way that segments and grout could always be stored on the machine for two ring building sequences. Thus, the machine operators were able to exploit the potential of the Double Shield principle, without being limited by possible shortages in the material logistics. Due to the design of the machine components it was possible to dismantle them within the excavation diameter without having to break out an additional cavern. The INELFE tunnel runs to a large extent parallel to the Le Perthus railway tunnel, built by Eiffage TP and Dragados S.A. from 2005 to 2007 with two large Double Shield TBMs from Herrenknecht (Ø 9.9m, total tunnelling length 16.4km).