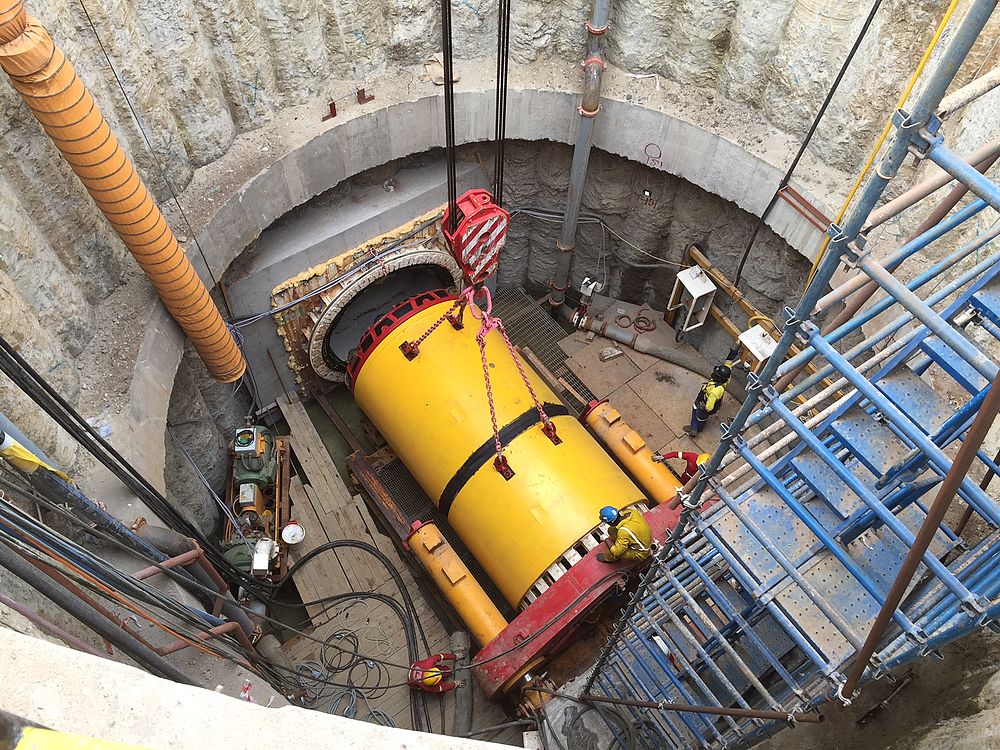 PDF Download
Share on
January 18, 2018 Kpone, Ghana / Schwanau, Germany. The 2,700 GWh per year capacity of the new "Kpone Independent Power Plant" (KIPP) is enough to reliably supply approximately 1 million households with electricity. In the operation of the oil-gas power plant located about 25 kilometers east of the Ghanaian capital Accra directly on the coast, it will be cooled with sea water from the Atlantic Ocean via two cooling water lines.

For the construction of these underground sea water intake and outfall tunnels (inner diameter 2 meters) Coleman Microtunnelling, a subsidiary of Bothar Group Australia, ordered a Herrenknecht AVND2000AB utility tunnelling machine. Herrenknecht specially designed the tunnel boring machine with a salvage module for this special application: In the sea-outfall method pipelines are constructed from the coastline into the open sea. There, the machine has to be recovered under water. The salvage module prevents the machine and the tunnel from flooding. In addition, for cutter tool changes under high groundwater pressure Herrenknecht equipped the machine (outside diameter 2.5 meters) with a hyperbaric chamber.

Two shafts on the coast served as starting point for the jobsite crew and the Herrenknecht AVND for a total of four pipe jacking drives between May and July 2017. In total, they covered a distance of 2,530 meters. First, the tunnelling specialists of Bothar Group Australia’s subsidiary Coleman Microtunnelling produced two tunnels from the two shafts toward the power plant. These 545 and 520 meter long tunnels run under the mainland and connect the sea-outfalls and the power plant. Afterwards, construction of the challenging tunnelling sections under the sea floor started. Initially, the machine excavated a 1,085 meter long tunnel from the coast to the target spot on the seabed for the extraction of the cooling water (“sea-intake”). There, the TBM was recovered by the jobsite crew at a depth of 17 meters. Finally, the machine created a parallel 380 meter long tunnel toward the sea which will later take the cooling water back into the Atlantic ("sea-outlet").

Brent Jones, Project Manager for Coleman Microtunnelling, was impressed with the Herrenknecht support in Schwanau and the Herrenknecht service team responsible for the region: "We could not have done it without this extraordinary support. All through Christmas the supply of spare and wear parts went smoothly." Swen Weiner, Area Sales Executive Middle East for the Herrenknecht Business Unit Utility Tunnelling, is certain: "The good project performance for the long sea-outfall drive in Kpone will be a benchmark for the future in the region." The supply of another Herrenknecht machine to the Bothar Group for a next sea-outfall drive in Ghana followed almost seamlessly.