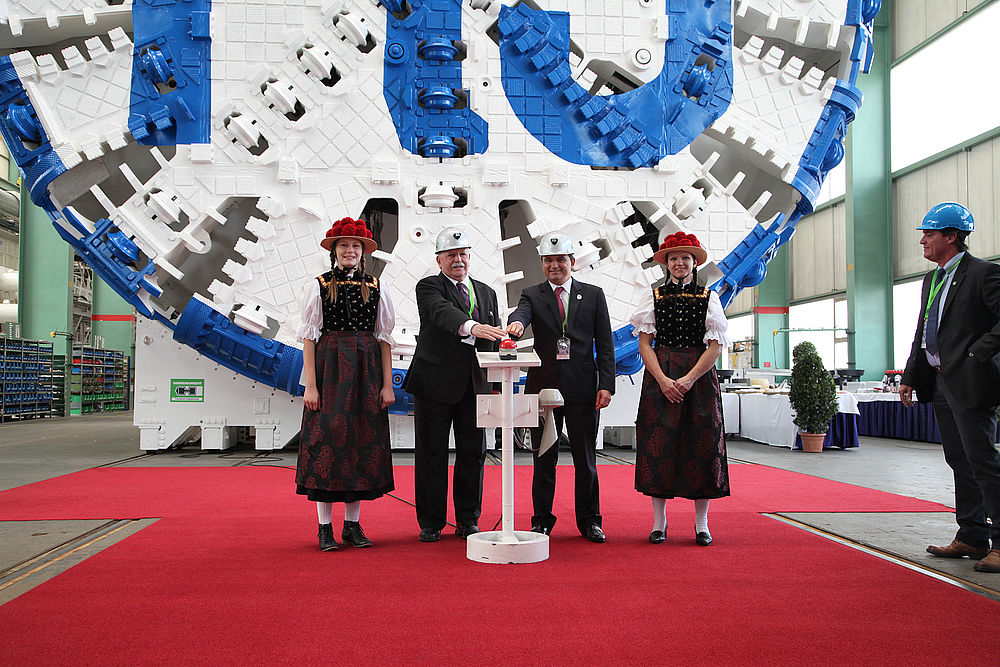 Herrenknecht AG is supplying a tunnel boring machine with a diameter of 11.46 meters for the construction of the new metro line 4 in Rio de Janeiro. It will contribute to relieving the traffic routes in the metropolitan area. At the company’s headquarters in southern German Schwanau the first tunnel boring machine to be used in Rio de Janeiro was accepted by the customer in late September 2012. During the workshop acceptance Regis Velasco Fichtner Pereira, Secretary of State of the state of Rio de Janeiro, presented the project to the Brazilian media representatives in attendance.

Schwanau, Germany, September 27, 2012. The »Cariocas«, the inhabitants of Rio de Janeiro, have some eventful years ahead of them. In 2014, Brazil hosts the soccer World Cup. Two years later, in 2016, the Summer Olympics are in Rio de Janeiro. In between, in 2015, the 450th Birthday of the city will be celebrated The state government of Rio de Janeiro is investing in a range of infrastructure projects to improve the traffic situation for the approximately eleven million inhabitants of the metropolitan area, and for the expected guests. One major project is the construction of the new Metro Line 4, with a total length of 14 kilometers.

This summer UNESO put the city of Rio de Janeiro on the World Heritage list. Rio de Janeiro possesses the world's largest urban forest. About a quarter of the urban area consists of mountainous landscapes including some steep, unbuildable slopes. The population density in the city is correspondingly high, as is the pressure on the transport infrastructure. It is completely overloaded and urgently needs to have its capacity expanded for the coming big events. In addition to the two existing metro lines with a total length of about 41 kilometers, the new »Linha 4« along the Atlantic coast is being built to create an efficient connection between Barra da Tijuca to the west and the suburb of Ipanema. From Ipanema, Metro Line 1 travels towards the city center, where the Maracanã stadium is currently being completely modernized for the soccer World Cup and the Olympic Games.

Herrenknecht is supplying a tunnel boring machine with an EPB shield (Ø 11.46 meters) for the 4.6 kilometer long section of the new Line 4 between the stations »Gavea« and »General Osorio«. On September 27, in the presence of the representative of the state government of Rio de Janeiro, State Secretary Velasco Regis Fichtner Pereira, the acceptance of the machine by the customer took place at the Herrenknecht plant in Schwanau. The customer is the »Consórcio Linha 4 Sul«, consisting of the Brazilian construction companies Construtora Norberto Odebrecht S.A., Construtora Queiroz Galvao S.A. and Carioca Christiani Nielsen Engenharia S.A. For the second largest city in Brazil, it is a first: for the first time a tunnel boring machine is being used, after all previous tunnels were built conventionally or as cut-and-cover tunnels. To ensure the machine can cope with the different ground conditions along the tunnel route, the Herrenknecht engineers designed it so it can be converted in the tunnel. Herrenknecht project manager Carlos Manzano Rey explains: "It is planned that the machine will cover the first 300 meters in open mode, then be converted for about 3,000 meters in closed EPB mode. Finally, around 1,300 meters will again be tunnelled in open mode." In open mode, the firm hard rock (gneiss) is transported away on a conveyor belt. In closed EPB mode removal is handled by a screw conveyor whose conveying speed simultaneously safely and precisely regulates the face support pressure during excavation in the predominantly sandy soil. Another special feature of the machine for Rio de Janeiro's Metro Line 4 is the articulation in a diameter range of more than eleven meters. It will allow the tunnelling team to cope with the tight bends with a radius of just 250 meters in some cases.

The moulds in which the approximately 19,000 concrete segments for the tunnel lining are produced are being supplied by the Group subsidiary Herrenknecht Formwork. In addition, for the operation of the machine Herrenknecht is supplying the navigation system (VMT), the tunnel belt conveyor (H + E) as well as vehicles for the transport of materials and personnel in the tunnel (Techni-Métal).
The lead construction company in the »Consórcio Linha 4 Sul«, Construtora Norberto SA Odebrecht based in Salvador da Bahia in Brazil, is an internationally recognized expert in mechanized tunnelling. Odebrecht is currently using Herrenknecht machines in the construction of the metro in Panama City and in Caracas (Venezuela), where several tunnelling projects have already been successfully completed. In the »Palomino« project (hydropower, Dominican Republic), using a Herrenknecht double shield Odebrecht bored up to 250 meters of tunnel per week through hard rock. In Sao Paulo Odebrecht will use a Herrenknecht EPB Shield for the construction of Metro Line 5. In Brazil, Colombia and Panama Odebrecht is building sewage lines with Herrenknecht technology both in pipe jacking and in segment lining.
PDF Download
Share on