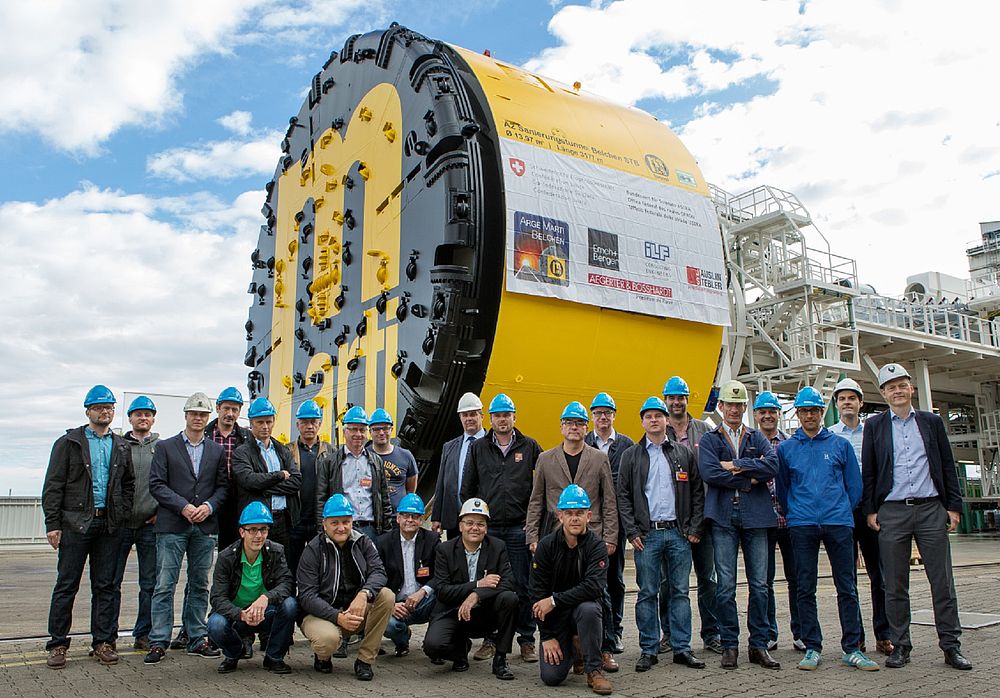 PDF Download
Share on
June 22, 2017 Eptingen, Canton of Basel-Country, Switzerland / Schwanau, Germany. Diameter 13.91 meters, weight 2,000 tonnes, length 75 meters – the Single Shield TBM manufactured at the Herrenknecht plant in Schwanau specifically for construction of the Belchen rehabilitation tunnel is the largest of its kind. The giant machine bored and secured  up to 90 meters of tunnel per week through the complex and varied geology of the Belchen mountain range. Under the direction of Marti Tunnelbau AG, commissioned by the Swiss Federal Roads Office FEDRO, the tunnelling crew took only 16 months for the 3.2 kilometer long drive, despite 1-shift operation Mondays to Fridays. As a result, they navigated the TBM through the mountain three months faster than originally planned.
After launching at the southern portal at Hägendorf (Canton of Solothurn) on February 9, 2016, the project participants celebrated the successful breakthrough at the northern portal near Eptingen (Canton of Basel-Country) on June 21, 2017. FEDRO Director Jürg Röthlisberger as well as the Baselbiet cantonal councilor Sabine Pegoraro and her Solothurn counterpart Roland Fürst among others congratulated the jobsite crew on project completion on site.

The Belchen Tunnel, which cuts through the Jura Mountains between Basel and Lucerne, is of great importance to the north-south road traffic via Gotthard as well as for domestic Swiss traffic. Currently an average of 55,000 vehicles per day over a length of almost 3.2 kilometers pass through the twin tube road tunnel of the A2 road tunnel with two lanes in each direction. As a result of increasing rock pressure, both tubes are urgently in need of repair to ensure operational safety.

The rehabilitation tunnel now completed was excavated through the mountain to the west of the two existing tubes at a distance of 40 to 116 meters from the existing tunnel system. Along the tunnel alignment the miners from Marti Tunnelbau AG mastered the challenging geological conditions with the Herrenknecht Single Shield TBM with overburdens of up to 360 meters. Soft layers of rock alternated with up to 225 MPa hard layers, in places with karstified and water-bearing transition zones. In addition, long sections of squeezing opalinus clay and swelling gypsum keuper had to be passed through. Site manager Sergio Massignani summarized after the breakthrough: "Thanks to the comprehensive knowledge of the ground conditions from the two existing tunnel tubes, coupled with our experience and Herrenknecht's know-how, the machine was optimally designed for the demanding requirements of the alignment of the Belchen rehabilitation tunnel."

After completion of the final works inside the tunnel and its commissioning in 2021, the two existing tubes dating from the 1970s will be renovated one after the other so that, as before, two lanes will be available in each direction, north and south, and the traffic can flow unimpeded. When the TBM was launched in February 2016, Jürg Röthlisberger summarized the concept of the project with the words "construction without queues".