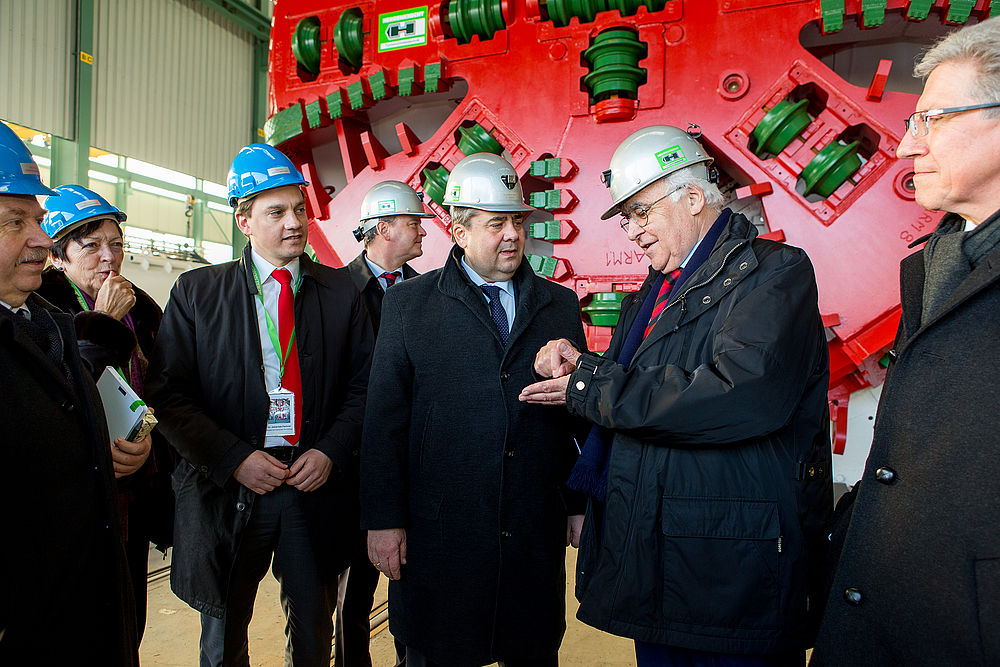 PDF Download
Share on
Schwanau, Germany, February 6, 2015. The German Federal Minister for Economic Affairs and Energy, Sigmar Gabriel, visited the world market leader in mechanized tunnelling technology Herrenknecht today. The paths of Vice Chancellor Gabriel and entrepreneur Dr.-Ing. E.h. Martin Herrenknecht had crossed during a trade mission to China in spring 2014. Company founder and Chairman of the Board of Management Martin Herrenknecht now showed the Minister the company on the ground and informed him about Herrenknecht’s current international project business. A range of different topics were discussed at a meeting with the company’s Board of Management, the Works Council Chairman and political guests from the region. These included geothermal energy in the renewables mix, inheritance tax in the course of generational change in family-run businesses as well as the development of young talents and demand for skilled workers. According to Martin Herrenknecht, older skilled workers should be rewarded taxwise and not financially penalized if they do not want to retire at the recently newly legislated pension age of 63 and would like to continue working. They are needed, also in the training and promotion of young talents. For Herrenknecht every skilled worker with years of expertise is an invaluable asset to the company.
The subsequent factory tour then also led directly to Herrenknecht’s industrial training workshop. Here young men and women presented interesting workpieces to Federal Minister Sigmar Gabriel. Martin Herrenknecht explained to the Minister: "For cutting-edge technology from Germany we not only need capable engineers or other graduates. In particular we also need practically inclined, technically adept skilled workers who can build the engineers’ designs with precision and the highest quality of execution." Herrenknecht trains around 200 young people in more than ten different apprenticeship occupations, who, particularly in the trades, generally stay with the company on completion of their training.
Federal Minister of Economics Gabriel: "I am impressed by what I have seen today at Herrenknecht AG. Technological expertise and precision work are top priorities. This impressively demonstrates why engineering ‘Made in Germany’ enjoys such an excellent reputation in the world.  It is clear that for sustainable quality assurance skilled workers play a key role here locally and we have also spoken about this. The apprentices of today are the skilled workers of tomorrow – if they are absent in the dual training system, they are also absent later in the factories. In the new alliance for education and training, politicians, business, trade unions and the state governments want to work together with substantial contributions to counter this."
Continuing the tour, in the assembly workshops the entrepreneur showed the Minister an important machinery component being manufactured in Germany with special know-how for the Chinese market. It is a gigantic cutting wheel of an XXL tunnel boring machine (Ø 15.76 m) for a multifunctional tunnel in Wuhan, Central China. The contract for this was concluded in the Minister’s presence in spring 2014 during the trade mission he led.

In the 2014 financial year the Herrenknecht Group achieved a new sales record with an order intake of 1.2 billion euros. Some of the machines ordered by construction companies are currently in assembly and production. In future they will be used for the construction of road, rail and metro tunnels for example in Paris, Doha, Casablanca, Mexico or Norway. In addition to traffic tunnels, water and wastewater systems, gas and oil pipelines, conduits for electricity, internet and telephone lines and tunnels for hydroelectric power plants are driven quickly and safely with mechanized tunnelling technology from Herrenknecht.
PDF Download
Share on