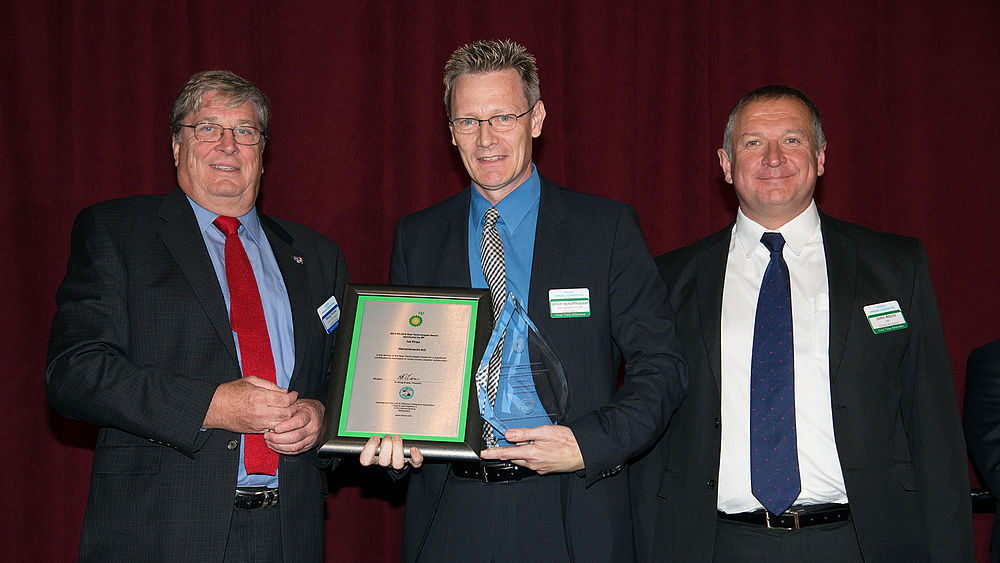 PDF Download
Share on
Herrenknecht Pipe Express® is an innovative procedure for installing pipelines in the semi-trenchless construction method underground, while saving costs and reducing impact on the environment. This innovative technology developed by Herrenknecht has now been awarded the internationally renowned "IPLOCA New Technologies Award" as the jury sees it as a significant advance in the pipeline industry.

Washington, DC, USA / Schwanau, Germany, 11. October 2013. On September 27, 2013 Herrenknecht received the "IPLOCA New Technologies Award" for the newly developed semi-trenchless Pipe Express® method in Washington (DC). Near-surface pipelines can be laid economically and in an environmentally-friendly manner with the Pipe Express® method. The IPLOCA (International Pipeline & Offshore Contractors Association), based in Geneva, Switzerland represents major companies in the onshore and offshore pipeline industry worldwide. Every two years, as part of its annual meeting, IPLOCA awards the IPLOCA Award for significant innovations in the pipeline industry which is sponsored by BP.

Doug Evans, President of the IPLOCA and CEO of Gulf Interstate Engineering, emphasized in his speech that Herrenknecht Pipe Express® can make a key contribution to environmental protection in pipeline projects. This aspect was decisive for the jury as protection of the environment is of major importance in the development of large-scale projects. Ulrich Schaffhauser, Chairman of the Executive Board of the Business Unit Utility Tunnelling, received the award during the event. He thanked the IPLOCA President Doug Evans, John Attrill, Project General Manager of BP and the international experts. "We are very pleased with this recognition. We were already honored once by IPLOCA with the Direct Pipe® technology in 2009. It fills us with pride that we were able to win this year against 18 competitors from around the world. It demonstrates the achievements and commitment of our engineers and project managers," said Schaffhauser.
Pipe Express® is an innovative mechanized method for the near-surface installation of pipelines. Pipelines of up to 2,000 meters in length and with diameters of 900 to 1,500 millimeters (36" - 60") can thus be installed in a single-step procedure. A tunnel boring machine loosens the soil which is then directly conveyed aboveground using a trenching unit that is carried along. At the same time, the pipeline is installed underground. The significantly narrower route enables the earthwork to be reduced to a minimum with this construction method and no groundwater lowering is necessary. This means that Pipe Express® has a far lower impact on the environment compared with the conventional, open-cut construction method. The Herrenknecht Pipe Express® technology received a second award of great importance in a short period of time. Half a year ago, the technology was awarded the "bauma Innovation Award" during the bauma 2013 in Munich. The development of Pipe Express® was funded by the Federal Ministry of Environment with the aim of developing a particularly environmentally-friendly and cost-efficient method for pipeline installation.
The new technology has shown its usefulness already in the first projects. As first reference project, the method demonstrated its efficiency in the construction of the "North-South Gas Pipeline" in the Netherlands, where the technology achieved top tunnelling performances of up to 1.20 meters per minute. Currently, the machine is in operation near Bangkok in Thailand for the "Fourth Transmission Pipeline". Despite the monsoon season, the 42'' gas pipeline is to be installed in several sections with overburdens of 1.20 - 2.30 meters. With the heavy rainfall this could not be realized efficiently using conventional construction methods with long and wide open construction pits.

Further information on the IPLOCA homepage