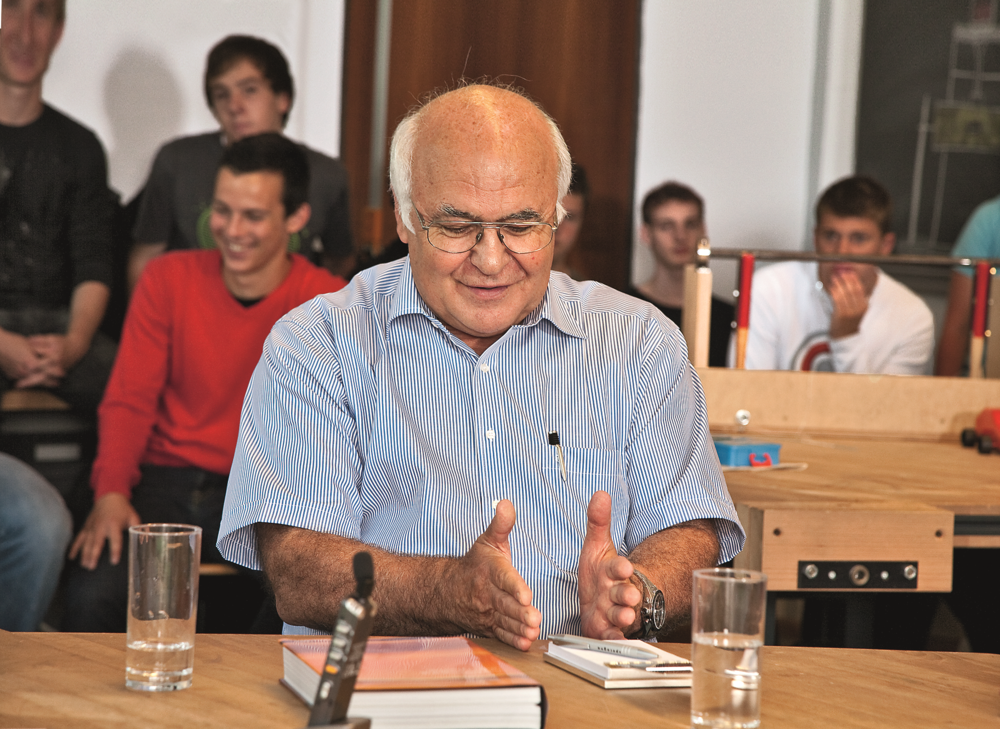 Martin Herrenknecht supports technology education and calls for its expansion

PDF Download
Share on
Entrepreneur Martin Herrenknecht sees a huge need for action to increase education and the promotion of young talent in the areas of science and tech-nology. Germany needs to much more intensively provide for new technological advances and the young talent needed for this in all major engineer-driven areas such as energy, environmental and medical technology and infrastructure development, he says. The core competence in engineering sciences has taken the export nation to the forefront worldwide. In future German industry needs 90,000 newly trained engineers per year, both men and women. Herrenknecht helps push the necessary promotion of young talent and calls for greater and broader efforts by society with regard to education.

Schwanau, Germany, August 26, 2014. For years Chairman of the Board of Management and engineer Dr.-Ing. E.h. Martin Herrenknecht has been increasing his own commitment through targeted funding and supporting of technical and scientific educational institutions as well as related promotion of young talent. In July 2014 the entrepreneur was appointed to the Sen-ate of the German National Academy of Science and Engineering (acatech), which has around 400 members from academia and industry. The National Academy of Science and Engineering advises policymakers and the public on strategic tech-nology-related issues of the future, represents German science and engineering at home and abroad and draws together input from the business world. Engineering education and the professional development of young people are particularly im-portant to the entrepreneur Martin Herrenknecht. "I too have only been able to create a globally leading company in specialized mechanical engineering because our en-gineers, technicians and skilled workers were able to build on excellent, progressive and practically applicable technical training." For many years now, in various ways Martin Herrenknecht and Herrenknecht AG have therefore been supporting scientific and engineering training institutions, initiatives for the promotion of young talent as well as programs for general technical education.

In promoting budding men and women engineers in tunnelling, Herrenknecht works with numerous universities in Germany, such as the Ruhr University Bochum (civil, mechanical and environmental engineering) or the RWTH Aachen (mechanical en-gineering). Within the global association of the tunnelling industry, the "International Tunnelling Association", through a newly established body Martin Herrenknecht promotes the further training and qualification of young tunnelling engineers around the world. "The most precious resource to solve our most pressing challenges of the future are above all highly trained engineers – this does not only apply to the construction of modern infrastructures."

Herrenknecht also supports technical progress in other scientific disciplines. At the KIT (Karlsruhe Institute of Technology) Herrenknecht has financed an endowed chair in the Department of Petrophysics since 2008, which promotes progress in the exploration and use of energy sources deep within the earth. This scientific pioneer territory plays a major role with regard to the ability to develop and utilize renewable geothermal energy. As a private citizen Martin Herrenknecht maintains an endowed chair at the Berlin Charité hospital for research into the rare ALS disease (amyo-trophic lateral sclerosis), which leads to serious damage to the central nervous sys-tem and muscles and is researched very little.

In order to develop understanding and acceptance of technology as early as possi-ble among young people, Herrenknecht AG supports general technical education at schools in a variety of ways. At the Max Planck Grammar School in Lahr, Herrenknecht has provided technical facilities and funding for experimental science classes since 2006. The annually changing programs are also very popular among young women, and for the last four years have been rounded off with a broadly based "Engineer's Day" for career guidance. Martin Herrenknecht: "In the medium term we need 90,000 engineers per year in Germany. We cannot afford not to win over talented young women and men for the engineering profession, otherwise we will quickly fall behind in international competition. As an export nation we face a concrete challenge, the solution of which business, science and politics must now powerfully push forward together."

Wissensfabrik (German for “Factory of Knowledge”), Companies for Germany

Cooperation and support for numerous other universities

ITACET, Foundation for Education and Training on Tunnelling and Underground Space Use / ITA