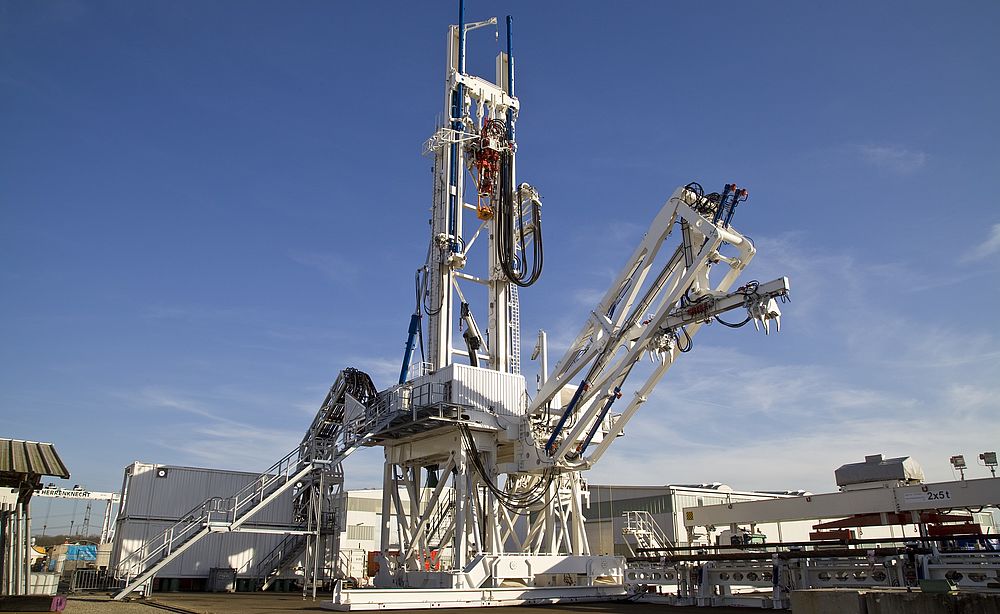 Herrenknecht Vertical is supplying the first deep drilling rig - known as the "Innovative Hydraulic Rig" - to China. The rig's high level of automation allows precise and safe drilling to a depth of 6,000 meters with maximized working safety and small crews. With its hydraulic supports the entire rig can be skidded and multiple wells drilled from a single drilling site.

Sichuan Province, China / Schwanau, Germany, May 8, 2014. Whereas in Germany the reservations about unconventional gas production dominate, China is getting on with the development of shale gas using deep drilling rigs made in Germany. China's biggest oil and gas producer and supplier, the China National Petroleum Corporation CNPC, ordered a Terra Invader 350 deep drilling rig from Herrenknecht Vertical GmbH. Packed in 51 transport units, the 1,000 tonne "Innovative Hydraulic Rig" is currently on its way from Schwanau to the country with the world's largest shale gas resources.

The exploration and production of natural gas trapped in shale is considered very challenging technically. A number of wells at depths of several thousand meters are required in each case. If these are bundled into so-called "multi-well pads" it reduces the total number of locations and hence the ecological footprint.

To this end the Herrenknecht "Innovative Hydraulic Rig" with the serial number B-012 can be raised with four hydraulic cylinders and then skidded. This means multiple wells can be drilled from a single location (pad drilling) without having to rig down and rig up the rig. As a result the new, so-called "XY Stepping System" allows the acceleration of the drilling and completion operations, considerably reducing the environmental impact.

Hydraulically-assisted processes in Herrenknecht deep drilling rigs are the basis for several technical innovations. As a result, in comparison to conventional systems their use offers substantial time and cost savings while increasing safety in particular. The supply of the drill string and casing in to the wellcenter, for example, is handled by the hydraulic gripper arm known as the pipe handler. This passes the drill pipes on to the elevator at the top drive, which is controlled by a hydraulic cylinder hoisting system that ensures control with millimeter accuracy and thus precise work in the well. The hands-off technologies reduce physically strenuous work to a minimum and increase the level of working safety to a maximum. Directing the rig from the driller's cabin further reduces the presence of specialist personnel in the danger zone. The high level of automation means the Herrenknecht Terra Invader drilling rig can be manned by only four staff members per shift. That means a reduction of crew sizes by up to 40 percent, yielding significant cost savings.

The commissioning of the new "Innovative Hydraulic Rig" was a key innovation for the country's oil drilling technology and a major and important step for the company on the way to a fast and comprehensive improvement in performance, notes the subsidiary of CNPC, plant operator CNPC Chuanqing Drilling Engineering Company / Chuandong Drilling Company. The deep drilling rig is scheduled to begin exploration for gas production in Sichuan Province shale plays before the end of 2014. The aim is for a period of only six months from acceptance in Germany to deployment in China.

On March 19, 2014 the factory acceptance was successfully completed at manufacturer Herrenknecht Vertical GmbH in Schwanau, southern Germany. The dismantled and packed rig is currently on its way to China. There the rig will be assembled in Suining by Herrenknecht in collaboration with the local partner SCJS Sichuan Jingshi Engineering Technology Co., Ltd. The components contributed by the contractor will also be installed there. Final acceptance is planned to be followed in August by transport to the actual deployment site in Sichuan Province. Herrenknecht's three-stage training program for the customer's crew and the service personnel has already started in parallel.

Adherence to the overall tight schedule is made possible by the modular system of the deep drilling rig, which is already demonstrating its advantages during transport to China. The compact container units that do not require separate heavy load transport ensure a high degree of mobility. This also means short assembly and dismantling times when projects are in progress.

For the development and manufacture of high-tech equipment, in areas such as hydraulics and electrical systems Herrenknecht Vertical profits from the long experience of its parent company Herrenknecht AG, the market leader in mechanized tunnelling technology. Innovations such as the hydraulic cylinder hoisting system are the results of a successful know-how transfer.

The new business relationship with Herrenknecht Vertical follows collaboration over many years between CNPC and Herrenknecht AG. Numerous reference projects have already been completed successfully in the Utility sector. These include parts of the largest infrastructure project in China, the "West-East Gas Pipeline", for which Herrenknecht supplied several AVN machines and HDD rigs.