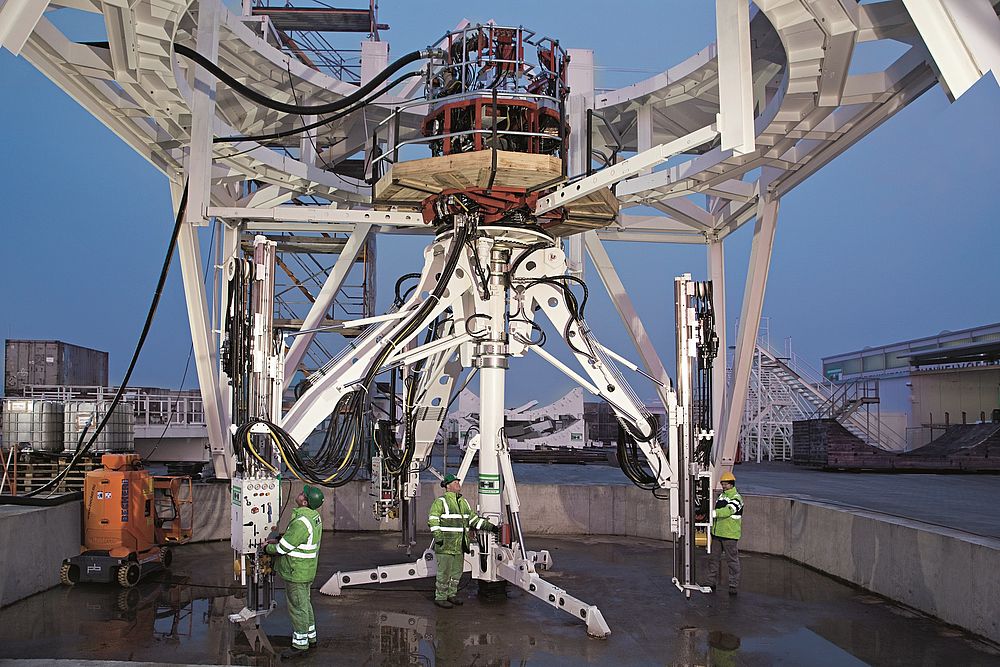 PDF Download
Share on
Currently, the new Nant de Drance pumped-storage power plant with a planned capacity of 900MW is under construction in the Swiss canton of Valais. Machines from Herrenknecht are excavating both an access tunnel and vertical shafts. While the successful completion of the tunnelling work was already celebrated, the shaft construction machines are still in operation.
Nant de Drance, Switzerland / Schwanau, Germany, 30. August 2013. The construction of the Nant de Drance pumped-storage power plant in the Swiss canton of Valais is groundbreaking for the country's energy policy. The share of electricity from nuclear power plants is to be gradually replaced by electricity from renewable energy sources. The Nant de Drance pumped-storage power plant will produce electricity from environmentally friendly hydropower from 2017 onwards, serving at the same time as a giant energy storage unit. Three Herrenknecht machines are creating key constructions of the underground infrastructure.

Gripper TBM. Initially, Marti Tunnelbau AG excavated an access tunnel to the machine cavern located at 1,700 meters above sea level with a Herrenknecht tunnel boring machine (Gripper TBM, Ø 9,450mm). The tunnel is the only safe winter access to the system during the construction phase and the subsequent operations. The Gripper TBM proved its worth under the direction of Marti already in the Lötschberg Base Tunnel project (2000-2003; Switzerland, 10km of railway tunnels) and the San Pedro project (2005-2006, Spain, 3km of railway tunnels).

Herrenknecht refurbished the Gripper TBM’s drive (main bearing diameter 5,088mm) at the Schwanau plant and delivered new roof bolting systems and other spare parts for the large-scale project on the high mountain jobsite. During excavation, the Swiss Herrenknecht subsidiary took over the refurbishment of the 17-inch disc cutters. The tunnel builders achieved peak performance at the end of October 2011: 220 meters of bored and secured tunnel in one week. At the beginning of September 2012, the tunnelling teams celebrated the breakthrough 600 meters deep in the mountain after 5.6 kilometers through gneiss, greywacke and granite.

Raise Boring Rig. In addition to the Gripper TBM, a Raise Boring Rig (RBR) from Herrenknecht is in operation in Nant de Drance (see picture 3). The RBR600VF is drilling two 424 meter deep vertical penstocks. They connect the upper Vieux Émosson reservoir with the machine cavern. Marti Contractors Ltd. managed to complete the pilot borehole (Ø 381mm) for the first shaft from the top down through rock with strengths of up to 150MPa, with best performances of up to 62 meters a day. The reaming (Ø 2,440mm) started on November 14, 2012 and was successfully completed after only two weeks with top daily performances of up to 33 meters. The excavation of the second penstock (pilot borehole and reaming) with the RBR600VF is planned for fall 2013.

Shaft Drilling Jumbo. The third machine that is currently biting through the hard rock in Nant de Drance is the new Herrenknecht Shaft Drilling Jumbo. After its commissioning in April 2013, Östu-Stettin Hoch- und Tiefbau GmbH is now working downwards with the machine in two drilling and blasting rounds of 2.5 meters, each with 120 blast holes per day. The Drilling Jumbo will ream the shafts drilled by the RBR (Ø 2,440mm) to a diameter of eight meters using the conventional method.

The Nant de Drance pumped-storage power plant will be gradually put into operation from the year 2017 onwards. 900MW will then be ready within two minutes to react quickly, especially in times of peak demand. As soon as more power than needed is available in the network, the turbines transport the water from the lower Émosson reservoir at 1,930 meters above sea level into the upper Vieux Émosson reservoir at 2,225 meters above sea level. The Swiss railway company SBB, which is a partner in the project, will acquire a portion of the energy generated in Nant de Drance to cover peak demand in the railway network.