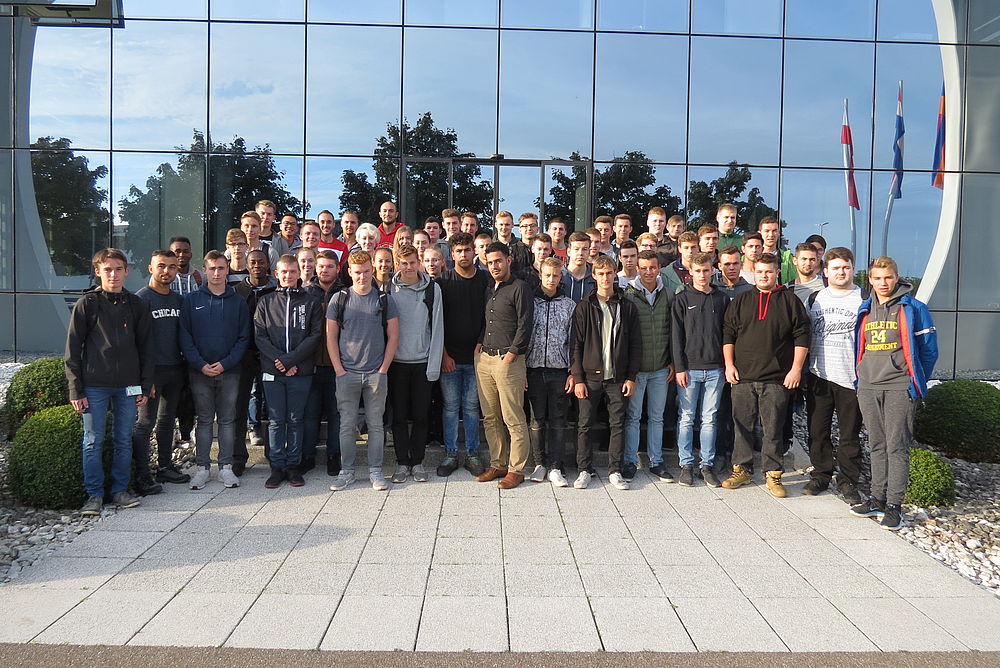 October 17, 2017 Schwanau, Germany. Over 100 apprentices have already been in training at Herrenknecht to date. As the new apprenticeship year got under way in early September they were joined by another 56 young men and women embarking on a dual training system apprenticeship at the Schwanau-Allmannsweier site. Most of them in the industrial sector. This is precisely where there is the greatest demand for well-trained and highly qualified specialists. For the first time Herrenknecht is also giving five refugees the opportunity to join the company and get one of the coveted apprenticeships. The immigrants can thus take their future into their own hands and show what they are capable of.

World record setting machines, imposing factory buildings and a state-of-the-art training workshop – when they first start on their new path the 30 hectare company headquarters in Schwanau must be impressive and fascinating to the young people just launching their careers. Especially for the five beginners who only left their homelands of Syria, Gambia and Guinea about two years ago. For them, Herrenknecht's training is both a challenge and an opportunity for integration at the same time. At the express wish of the Board of Management, the young refugees came to Schwanau via the municipal employment program, the government employment agency, refugee aid and social workers at the vocational school in Lahr. They are now creating a future for themselves at their new domicile in the Ortenau region. All of them speak a little German already. Additional extra tuition will help them improve their language skills as quickly as possible. Wasef Katmawi (25) wants to become an IT specialist. In contrast, 19-year-old Mohammed Hoto is training as a specialist in metal technology. In their homelands the young men often only had incomplete schooling and kept their heads above water with odd jobs. "I am very happy about the training at Herrenknecht and hope to be taken on when I finish, and later work on international projects around the world," says Katmawi.

Herrenknecht makes the career start as personal as possible for the beginners. "We provide all our apprentices with individual support," emphasizes Herrenknecht's Head of Training, Klaus Himmelsbach. A young team of trainers gives the junior staff practical instruction. In the training workshop a state-of-the-art machine park is at their disposal, with which practical skills and knowledge across all areas of application are taught – from practice workpieces to projects for actual production. With in-house lessons in English, professional and business studies, the apprentices are prepared for everyday working life in an international company. "If necessary, we also offer extra tuition for the challenges at the vocational school", says Himmelsbach. An annual bonus for particularly good performance creates additional incentives.

With the training, Herrenknecht gives the prospective future employees a promising perspective for their professional life: "Young people are our future. We can never do enough with regard to skilled workers, because what use is the highest level of engineering achievement if no one can build and produce it. We are therefore committed to supporting anyone who wants to actively work with us to build the best tunnel boring machines in the world", emphasizes company founder Dr.-Ing. E.h. Martin Herrenknecht. The dual training system is one of the success factors of the German economy and ensures the supply of new skilled workers it needs.

Herrenknecht is one of the largest trainers in the Ortenau region. In April the company was named "Germany's best training company in the plant and mechanical engineering sector" by the magazine Focus Money. Last year, on completing his apprenticeship, Tobias Robben was honored as Germany's best structural mechanic. Herrenknecht apprentices are regularly awarded prizes at the graduation ceremonies of vocational schools and universities.
PDF Download
Share on