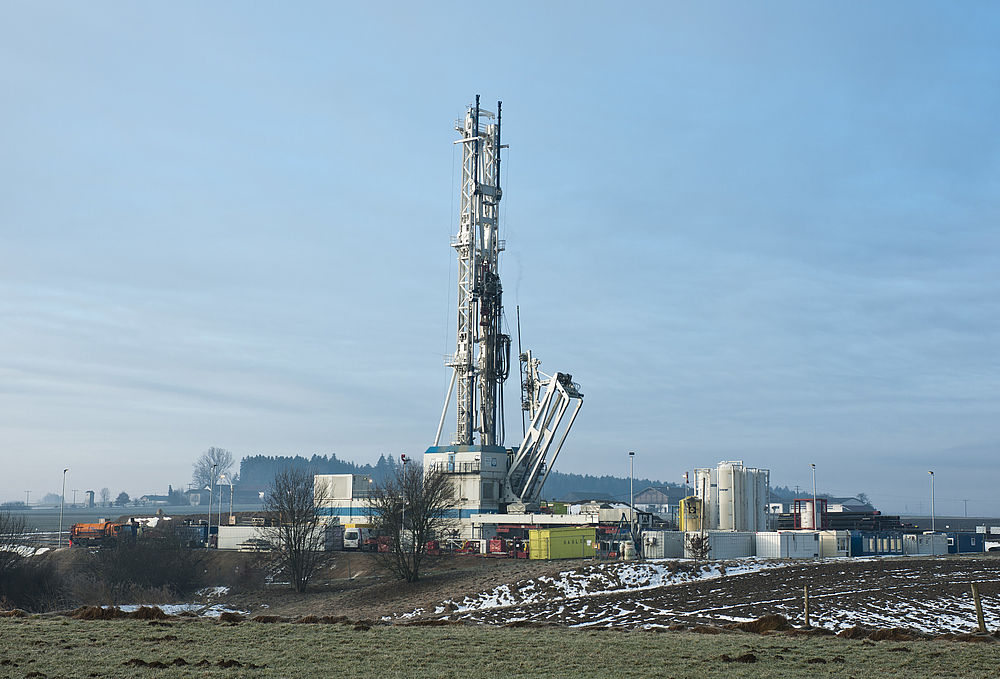 PDF Download
Share on
The Terra Invader 350 "InnovaRig" built by Herrenknecht Vertical and operated by H. Anger's Söhne is currently drilling for hot thermal water in the Bavarian community of Kirchweidach. Specially developed in 2006 for tapping geothermal power at great depths, this high-tech deep drilling rig set a new drilling length record of 4,937 meters in the first of two planned wells.

Kirchweidach, May 20, 2011. Deep drilling is being performed in the Upper Bavarian community of Kirchweidach in the district of Altötting. A geothermal-powered electricity and heating plant is to be commissioned with an installed output of 6-8 Megawatt in mid-2012. Up to 13,000 Megawatt hours of heat will then be decoupled per year and made available to consumers. The "GEOenergie Kirchweidach GmbH" project company has been established for this purpose. It will build the power plant in the Erdlehen-Oberaign industrial park which will then feed electricity into the public grid and provide district heating for the community and its inhabitants.

An efficient operation of the planned geothermal power plant will involve two diverted wells at maximum depths of 4,000 meters. Seismic measurements have already localized a favorable formation which would suggest high temperatures and sufficient volumes of water. The client has commissioned the renowned drilling company H. Anger’s Söhne from Hessisch-Lichtenau to perform this task. This company has already successfully sunk a variety of geothermal wells and is relying on the TI-350 "InnovaRig" built by Herrenknecht with a hook load of 410 tonnes. After three successful deep drilling operations in Dürrnhaar (Bavaria) and Hanover, this is the third time the high-tech rig is involved in a geothermal project in Germany.

After drilling down to a depth of 4,937 meters, the "InnovaRig" successfully reached its specified destination at the end of April 2011. Thanks to the hook load of 410 tonnes, the target horizon for this longest well drilled using a Herrenknecht Vertical deep drilling rig was easily and safely achieved. The subsequent lift test confirmed that a sufficient volume of hot thermal water can be transported via the bore hole for operating the planned power plant. Work therefore commenced on the second well only a few days ago. The geothermal power plant is due to go online in mid-2012.