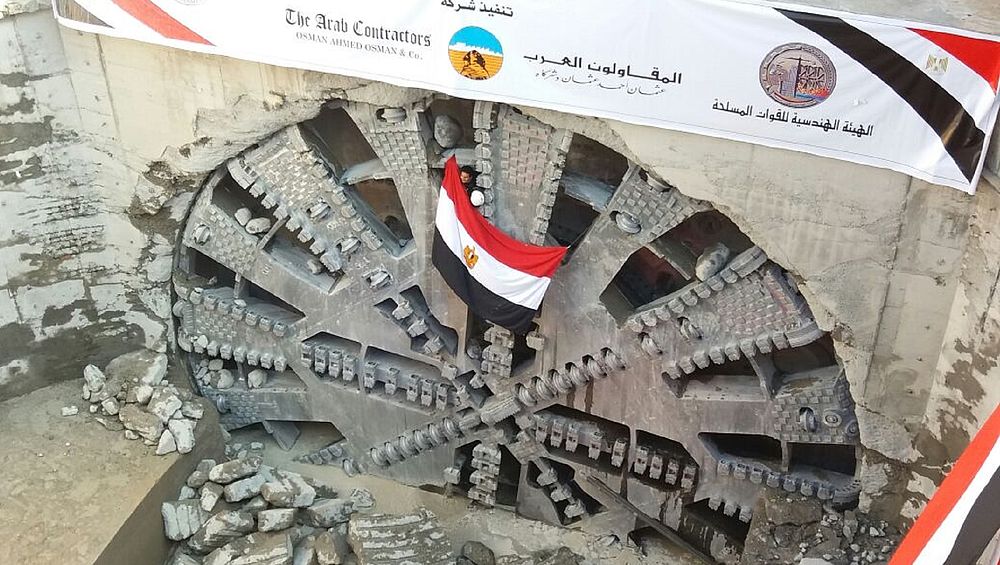 New routes to the Sinai – final breakthrough at the Suez Canal

On the Christmas weekend, Egyptian President H.E. Abdel Fattah al-Sisi rang in a new era for the Sinai Peninsula: on Saturday, December 23, 2017, S-960 (Ø 13,020 mm), the third of four Herrenknecht Mixshields, completed tunnelling for the first of two new twin-tube road tunnels under the Suez Canal at Ismailia. The tunnels at Port Said and Ismailia, designed to link the Sinai Peninsula more closely to the Egyptian heartland in future, will open up new economic opportunities. Instead of spending up to 5 days in long car queues for the ferry, crossing the Suez Canal via the efficient tunnels will only take 10 minutes in future.

January 5, 2018 Ismailia, Egypt / Schwanau, Germany. On the 2017 Christmas weekend, Egyptian President H.E. Abdel Fattah al-Sisi inaugurated very significant development projects at the Suez Canal. These included two gigantic twin-tube road tunnels under the international trading artery. A total of four tunnel tubes were driven in about 1.5 years for the new, efficient transport links under the artificial waterway. The shells are now almost completed: two road tunnels were built north of Ismailia and run under the old and new Suez Canal. Two more cross beneath the canal south of Port Said. With this key large-scale project, Egypt is expanding infrastructure immensely important for world trade. The efficient connection of the canal cities to the waterway's eastern shore will simplify trade activities, facilitate traffic and support economic development of the region.

On December 23, 2017, the third Herrenknecht Mixshield S-960, with a diameter of 13.02 meters, completed the final drive for the road tunnel project at Ismailia on the Suez Canal. For the new Suez crossings, H.E. President Abdel Fattah al-Sisi ordered a total of four identical state-of-the-art tunnel boring machines (TBMs, S-958 – S-961) from Herrenknecht. Under the direction of the construction companies Joint Venture Arab Contractors / Orascom and Joint Venture Petrojet / Concord / CMC, in the past 19 months these giant tunnelling machines safely produced the tunnels near the Egyptian cities of Ismailia and Port Said at depths of up to 60 meters and at a water pressure of up to 6 bar. All in all, the high-tech machines from Schwanau bored and built 15.3 kilometers of new tunnel during this time.
To allow for a smooth project progress during the very complex tunnel operations, Herrenknecht AG trained 40 Egyptian engineers in Schwanau and on the jobsites. For optimal support of the tunnelling processes, Herrenknecht also provided the tunnelling teams with comprehensive services and supplied key peripheral equipment through the Herrenknecht subsidiaries VMT, MSD, Formwork, H+E and TMS.
Egypt's President H.E. Abdel Fattah al-Sisi and Dr.-Ing. E.h. Martin Herrenknecht, Chairman of the Board of Management of Herrenknecht AG, were personally present at the final TBM breakthrough of the Mixshield S-960 at Ismailia. H.E. President al-Sisi emphasized that the project was crucial to Egypt's future. The previously neglected economy of Sinai Peninsula can grow as a result. The tunnels will shorten the time for crossing the Suez Canal immensely: currently this can take up to five days, as queues of traffic to the ferry back up for miles. With the new tunnel connections, soon it will take only 10 minutes.