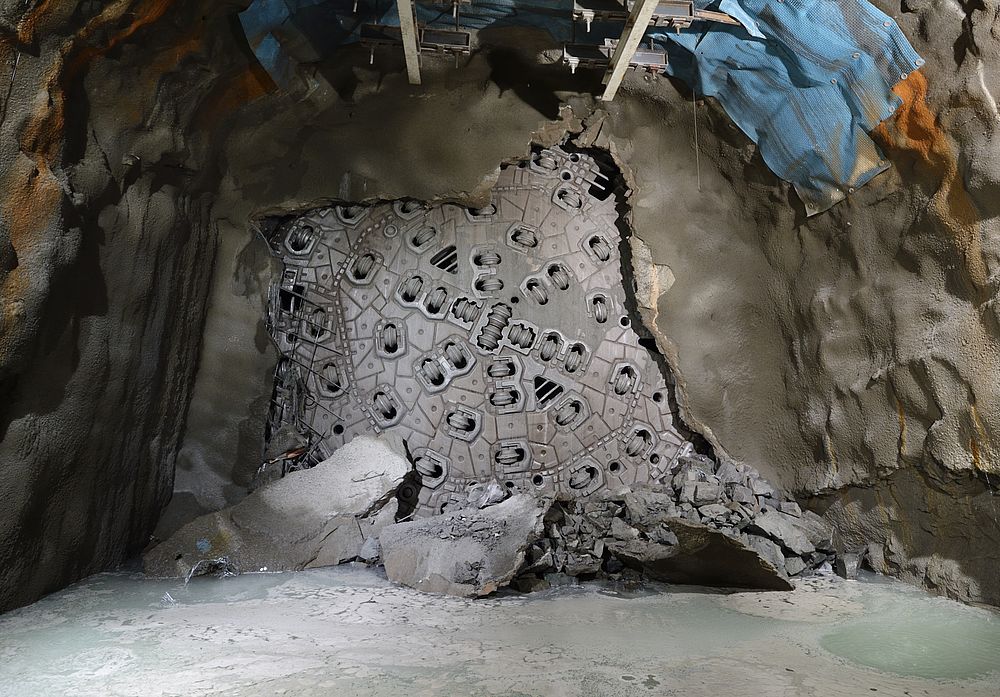 PDF Download
Share on
The unshakable will of clients, powerful construction companies and innovative tunnelling technology made it possible to deal with even the greatest challenges in tunnel construction. This is demonstrated by the successful completion of tunnelling work at the Hallandsås Tunnel in Sweden. At the beginning of September 2013, tunnelling on one of the world's most complex and, due to the geological conditions, the most challenging tunnel projects was completed. In the Hallandsås Tunnel project, the Herrenknecht Multi-mode-TBM cut through the last meters of rock to the target shaft and this second breakthrough marked a victory of the people and the innovative tunnelling technology involved against a particularly intractable mountain massif. After 8 years of unyielding tunnelling, this is a grand triumph for all those involved in the project. The mountain massif had proved to be invincible against other tunnel construction methods before.

Båstad, Sweden / Schwanau, Germany, September 23, 2013. The railway route along the Swedish west coast from Malmö to Göteborg is one of the vital arteries for the country's passenger and freight traffic. When expanding this route, the Hallandsås mountain range south of Båstad in Sweden was the decisive bottleneck, since it could only be passed in one-track operation until now. With the breakthrough of the Herrenknecht TBM, the shell of the twin-bore Hallandsås Tunnel - which will create more capacity - was completed on Wednesday 4, September 2013.

Transport Minister Catharina Elmsäter-Svärd, representatives from the construction companies, the Swedish Transport Administration Trafikverket and from the local and national administrations, as well as numerous representatives from the media celebrated this outstanding project success. "We have shown that it is possible to build a tunnel of high quality trough the complicated Hallandsås, while at the same time meeting the high environmental requirements. Our competent and dedicated co-workers are today worthy of every recognition for our common achievement ", said Per Rydberg, project manager of the Swedish Transport Administration at the breakthrough ceremony.

Due to its geology, the project occupies a top position on the list of tunnel projects with extremely complex ground conditions. Large sections of the very abrasive rock formations (mainly gneiss and amphibolite) with high rock strengths of up to 250MPa are extremely fissured. In addition, the tunnel is exposed to extreme groundwater pressures of more than 10bar on large parts of the route. Earlier attempts to construct a tunnel failed to pass this hurdle and led to strict environmental requirements which limited the quantity of groundwater to the liter allowed to drain during tunnel construction between Förslöv and Båstad, for example.

For the mechanized tunnelling - which was the last resort to implement the project - Herrenknecht developed and delivered a specially adapted tunnel boring machine (TBM) for the two remaining 5.5 km long sections of the overall 8,7 km long Hallandsås Tunnels. The high-tech colossal machine (Multi-mode TBM, Ø 10,530mm) was designed to work in both the closed slurry mode with hydraulic removal of excavated material and the open hard rock mode with belt conveyor removal. Permanently installed drilling and injection tools ensured water inflow could be controlled by grout injection when needed. As part of comprehensive test series, the sealing system of the machine was designed to withstand a groundwater pressure of up to 13bar. Werner Burger, Head of Design Department Traffic Tunnelling at Herrenknecht said: "The machine design for Hallandsås was both a response to the extreme project requirements and a large technological advance: the concept aimed to provide a hard rock machine with the potential to work safely and efficiently in loose rock and even under high groundwater pressure if needed. Hallandsås has set the right course for later projects."

The Swedish-French joint venture of the companies Skanska and Vinci started tunnelling on the first Eastern tunnel in September 2005. Tunnelling teams and engineers approached the optimum working method in the tunnel in close and trusting cooperation of machine supplier and construction companies. The best results were obtained with the machine named "Åsa" in the open mode with cement injections which kept the groundwater at bay. High abrasivity and blocky rock on parts of the route caused an extremely high wear of material at the cutterhead, and the maintenance and tool change intervals were correspondingly high. However, soon after the start of tunnelling, jobsite reports showed regular progress, although time-consuming cement grouting and the required service intervals meant limited speed. Nevertheless, man and machine were able to force some hundred meters of tunnel per month from the mountain.
Then, spring 2008 saw the first victory of many with the breakthrough into the cavern of a mid adit, which had been excavated with conventional methods. On that occasion the highly worn cutterhead was replaced by a new one with larger disc cutters (19" instead of 17"). Finally, in August 2010 the entire first tunnel was successfully completed. The machine was completely refurbished and again equipped with a new cutterhead for excavating the second western tunnel. The Herrenknecht Field Service rendered active assistance on the jobsite with competent staff and the supply of spare and wear parts: they assisted in the assembly of the machine on the jobsite, during tunnelling in both tunnels and in the restructuring and refurbishment work for the second drive.
From February 2011 onwards, specialists from the Skanska-Vinci joint venture drove the machine from Förslöv towards Båstad for the second tunnel, where they were welcomed and celebrated by a large and festive party at final breakthrough on September 4, 2013. Dr.-Ing. E.h. Martin Herrenknecht was present to attend this outstanding event: "This breakthrough is an absolutely great moment in my life. A big success for all those involved. It is like the moon landing of tunnel construction. Nobody else has been here before us." After almost 8 years of tunnelling this finish marked an outstandingly pioneering achievement in the construction of underground infrastructure. Thanks to state-of-the-art tunnelling technology and trusting cooperation of all project partners even a tunnel project which seemed to be invincible could be managed safely for people and the environment. Explore the Hallandsås project in our reference database.
PDF Download
Share on