PDF Download
Share on
With the second breakthrough, boring of the largest tunnel ever built in Poland is finished. The two parallel tubes of the Slowacki tunnel create a road link between the Baltic city's airport and the deep water seaport. In difficult soil conditions, a Herrenknecht tunnel boring machine dug the tubes under the Vistula.

Gdansk/Schwanau, July 15, 2014. The two new 1,076 meter long tunnels are now being fitted out for road traffic. They are the centerpiece of the ten-kilometer long Slowacki Route, linking the port to international air traffic as well as transit routes to the country's interior. The opening of the tunnel in the coming year will thus increase the significance of Gdansk as a hub for trade between Eastern and Western Europe.

During a celebration on June 9, guests from home and abroad applauded when just before 2:30 p.m. the tunnel boring machine appeared in the target shaft. Among the guests were the Polish Deputy Prime Minister and Minister of Development and Infrastructure Elżbieta Bieńkowska, the mayor of Gdansk Paweł Adamowicz, Ignacio Botella, General Manager of the construction company Obrascon Huarte Lain (OHL) as well as Herrenknecht AG company founder Dr.-Ing. E.h. Martin Herrenknecht. In her speech, Minister Bieńkowska, patron of the tunnel boring machine and initiator of the project, recalled the huge planning and construction challenges which had now been successfully overcome. Mayor Paweł Adamowicz emphasized that the tunnel was the key section of the Slowacki Route and a very efficient transport artery now added enormously to the significance of Gdansk as a hub.

For the construction of the tunnel Herrenknecht designed and delivered a 90 meter long Mixshield-type tunnel boring machine (TBM) that with a shield diameter of 12.56 meters counts among the unique giants of its type. Herrenknecht was awarded the contract for it by the Spanish construction company Obrascon Huarte Lain (OHL), which has already built over 50 kilometers of railway, metro and water tunnels using Herrenknecht tunnelling technology. Shortly after construction began in the fall of 2013, OHL paid tribute to the innovative tunnel boring machine for the Slowacki tunnel as well as the long-standing partnership with Herrenknecht. "Especially in projects abroad, it is very important to have a technologically innovative and progressive partner," said  OHL president Francisco Marín Andrés in recognition of the cooperation as he presented the "LIDERA!" innovation award to company founder Martin Herrenknecht.

As expected, the geological conditions while crossing under the Vistula at depths of between 9 and 35 meters proved to be very changeable. The water pressure experienced was up to four bar. In some places only six meters of soil separated the TBM from the river bed. In order to keep the underground structure as stable as possible and to protect it against buoyancy, the thickness of the concrete lining segments was designed to provide extra strength.  For this reason, 60 centimeter thick tunnel segments weighing 18 metric tons were used. For the production of the segments, Herrenknecht Formwork Technology GmbH supplied four sets of moulds with an inner diameter of 11 meters as well as additional equipment such as a vacuum lifter and turning table for safe and easy handling of the extremely heavy segments.

Further additional equipment from the Herrenknecht stable included a separation plant, which, by means of muck separation tailored specifically to the tunnel boring machine, enabled high advance rates in the predominantly sandy soil. The TBM's navigation system was supplied by Herrenknecht subsidiary VMT, the start-up structure as well as the equipment for material and personnel transport in the tunnel came from the Dresden-based Herrenknecht branch MSD. Specialists from Global Tunnelling Experts supported the customer with service during on-site assembly of the machine and through to successful completion of the project. 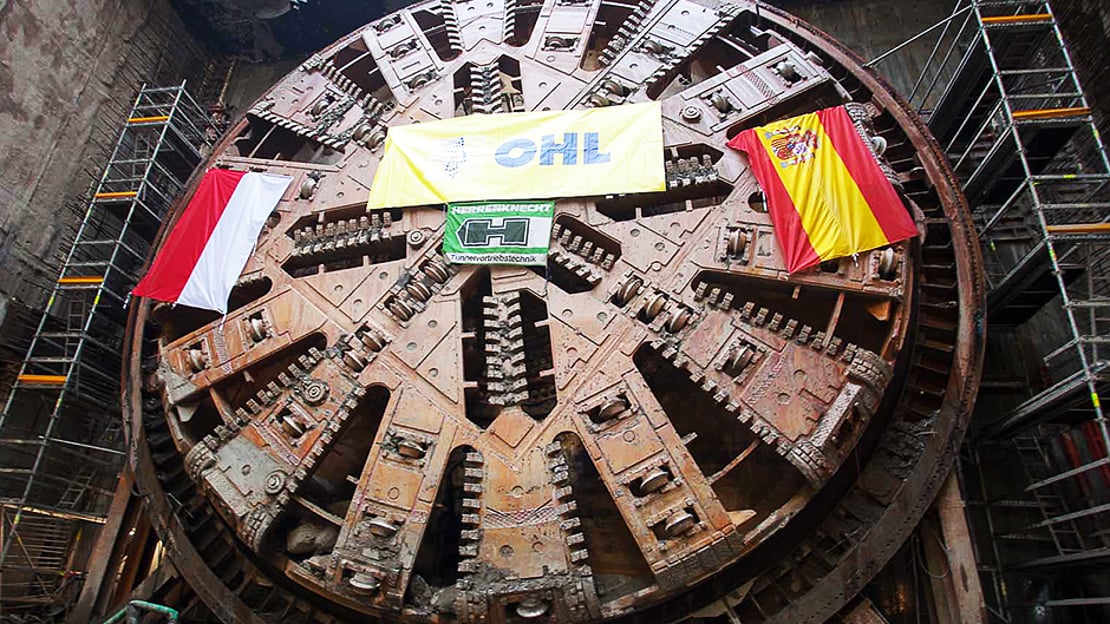