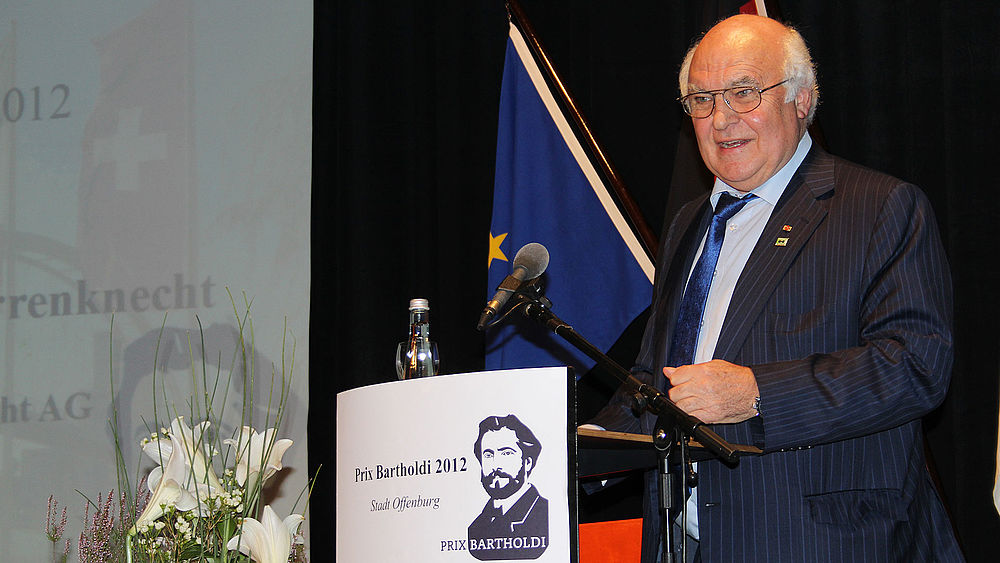 PDF Download
Share on
Schwanau, Germany, November 26, 2012. Dr.-Ing. E. h. Martin Herrenknecht, Chairman of Herrenknecht AG's Board of Management, was awarded the special Prix Bartholdi award for 2012 on November 23, 2012 in Offenburg. The Prix Bartholdi honors personalities every year who have made a special contribution towards cross-border cooperation in the Upper Rhine area.

"Martin Herrenknecht has achieved world leadership with his state-of-the-art technology. Not only does he bear in mind that we are living in a globalized world, he also maintains close connections to his home and his region in a way that goes beyond borders," said the former Prime Minister of Baden-Wurttemberg, Professor Dr. h. c. Lothar Späth, in his laudatory speech at the award ceremony. It is thanks to this kind of dedication, that we are finding more and more large and networked regions cooperating beyond national borders. "As part of his entrepreneurial responsibility and with great heart Martin Herrenknecht also thinks a great deal about the lives and futures of the people of his home region" said Lothar Späth. For example, he often initiates civic activities, supports academic institutions and associations, and is always willing to help when people ask for his support, be it small or large-scale. With Lothar Späth as Chairman of the Supervisory Board (1998 - 2012), Herrenknecht AG became a global champion in tunnelling technology.

Martin Herrenknecht expressed his thanks for the award and for the kind words of Lothar Späth and said: "Networking educational institutions and research facilities from Karlsruhe via Strasbourg to Basel in an intelligent and targeted way is the smartest and best thing we can do to overcome the tough competition." In this way, young people in the region are also given a place where they can fully develop and build up exciting professional, business or scientific perspectives for the future.

In 35 years, the businessman Martin Herrenknecht from Baden has built up a global company with more than 4,000 jobs and 200 training positions. As a private citizen and entrepreneur, Dr.-Ing. E. h. Martin Herrenknecht supports a great many regional and global initiatives in the areas of sport, society, education and science.

The aim of the Prix Bartholdi is to support cooperation between universities in the Upper Rhine region and to promote the internationalization of study and training. In this process, the attractiveness of the Upper Rhine region as an expertise and business location is emphasized and its competitiveness promoted. Dr.-Ing. E. h. Martin Herrenknecht is the twelfth personality to be given a prize by the awarding association after Georg Endress (2011), Charles Buttner (2010), Lothar Späth (2009), Wolfgang Schäuble (2007), Tomi Ungerer (2006) and Annette Schavan (2005) among others.
PDF Download
Share on