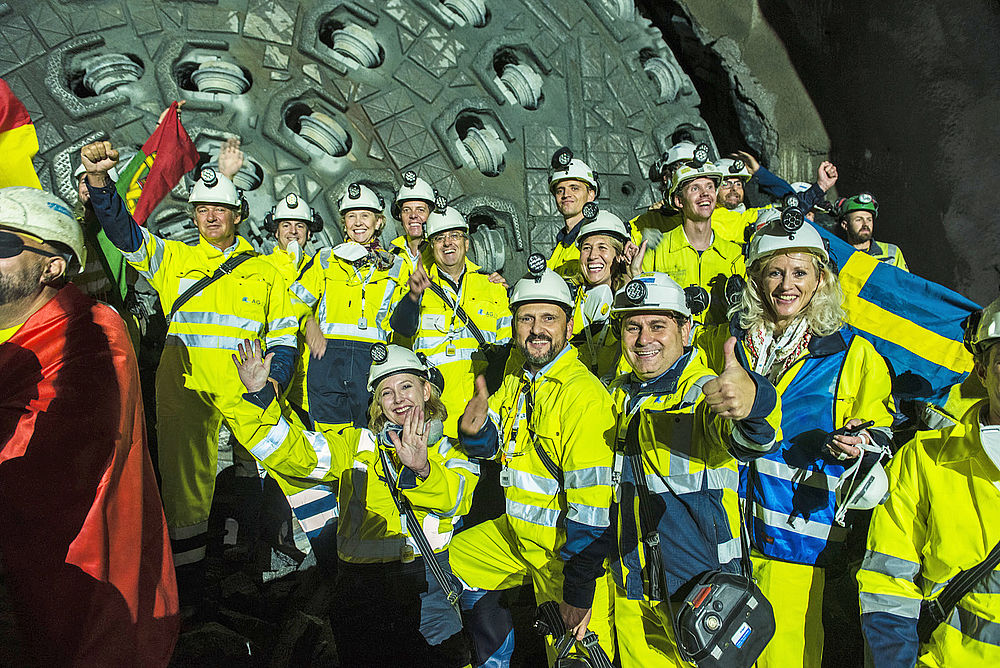 Royal double breakthrough in Oslo.  After about 9 kilometers each through tough gneiss, on Tuesday, September 11, 2018 the twin tunnel boring machines from Herrenknecht "Queen Eufemia" and "Queen Ellisiv" achieved an historic double breakthrough near the city center of Oslo. The Follo Line Project is currently the country's largest infrastructure project and involves the construction of Norway's longest railway tunnel. The two 20 kilometer long tunnels connect Oslo with Ski further to the south and from 2021 will shorten travel time for commuters by half.

September 28, 2018 Oslo, Norway / Schwanau, Germany. Via live stream, on September 11, around 25.000 viewers around the world watched the almost simultaneous breakthroughs of the two Herrenknecht sister machines "Queen Eufemia" and "Queen Ellisiv". Not only for client Bane NOR and the joint venture Acciona-Ghella was it an historic day. The use of a total of four Herrenknecht tunnel boring machines (TBMs) for the major Follo Line Project was a first for the Norwegian tunnel industry too. It is an advance of mechanized tunnelling technology into a country where conventional tunnelling traditionally dominates. But Anne Kathrine Kalager, Project Manager at Bane NOR, is certain: "In future TBMs will be a realistic alternative in large projects, even in our extreme hard rock." Since late 2016 the TBMs with diameters of 9,900 mm each have been boring their way through tough gneiss over a total length of around 36 kilometers. Tunnel boring represents the majority of the long tunnel – or 18.5 km of a total of 20 km tunnel on the 22 km long stretch. Completion of the Follo Line Project is planned in December 2021.

Before the final breakthrough of the four machines, a total of four million cubic meters of rock – almost twice the volume of the Cheops pyramid – has to make way. In order to master the tough mission, Double Shield TBMs have been used. They are among the most technically sophisticated tunnel boring machines and combine the functional principles of Gripper and Single Shield TBMs in one machine. In stable geologies, combining these methods permits the installation of concrete segments parallel to the drive. The best performance of "Queen Ellisiv" under these extreme conditions was 19 rings or about 34 meters per day. But not only the drive was faster than expected. Factory acceptance of the first TBM took place in March 2016 already, just eleven months after receipt of the order. There were only 19 months between contract signing and the beginning of work of the fourth and thus last of the machines in Oslo in November 2016. At times, around thirty Herrenknecht service experts were on site simultaneously to actively help with the assembly of the machines. "So we were four months ahead of the official schedule with the TBM launch," explains Fernando Vara, Project Director of the Acciona Ghella JV.

During the drive, the tunnelling and service teams also work closely together. In Schwanau, up to 40 refurbishment experts take care of the professional reprocessing of the disc cutters. The linchpin of the drive is the quality of the cutting tools. The disc cutters made of special steel, 19 inches in diameter and each weighing up to 372 kilograms, are pressed against the extremely abrasive rock with up to 32 tonnes of pressure on 70 annular tracks. The geological conditions result in high wear. In the course of the project, approximately 4,250 cutter changes are necessary on each machine. "I’ve never had to deal with such hard rock before. You can only handle that with teamwork," says Francesco Giampietro, longtime TBM manager at Ghella.

The Follo Line Project is currently the largest infrastructure project in Norway. From 2021, the high-speed line will connect Oslo with Ski to the south. Encouraging commuters to switch from cars to public transport is expected to reduce the volume of traffic in the Norwegian capital. An important milestone for this is the Follo Line. "Half the Norwegian population lives within a radius of 100 kilometers around the capital," says Kalager. "The Follo Line also strengthens the social foundation for the future.” Before trains can travel here, two machines must continue through extremely hard rock. In the spring of 2019 the final breakthrough of the two other tunnel boring machines is expected, currently still underway in the direction of Ski. Until then, every day "Anna from Kloppa" and "Magda Flatestad" are boring their way through one of the world's hardest rock types, with up to 300 MPa.