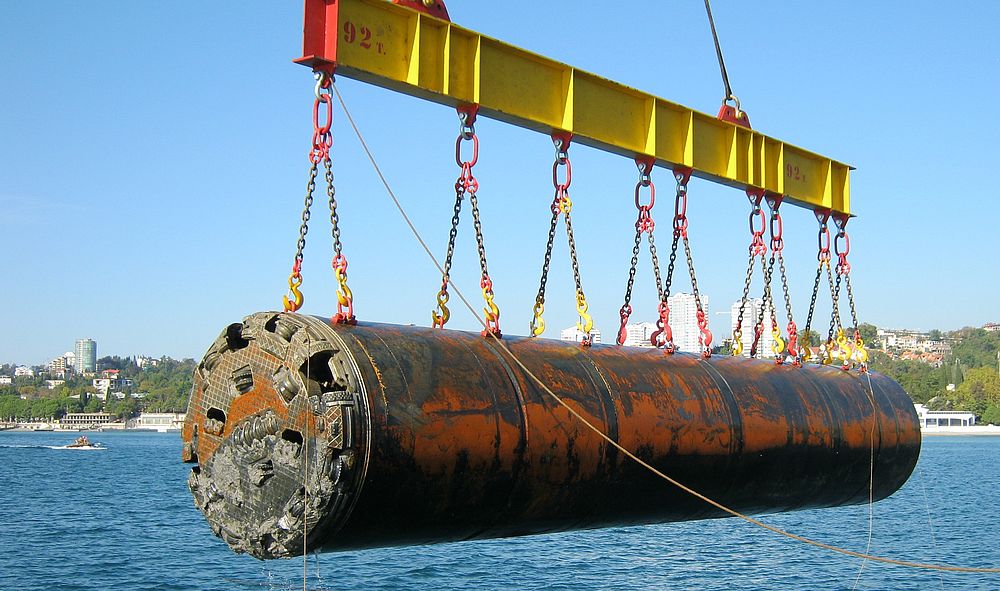 PDF Download
Share on
Preparations for the 2014 Winter Olympics in Sochi are already in full swing. Russian infrastructure developers are relying on trenchless tunnelling technology made by Herrenknecht to install pipes for an efficient wastewater system. An AVN machine excavated the first two sea outfall tunnels in Russia. Within only 100 days, a Herrenknecht AVN2000 installed a total of 2,014 meters of pipe with top performances of up to 37 meters per day. The performances achieved on this route constitute an unprecedented record in the DN 2000 (2.5m) diameter range.

Sochi, Russia/ Schwanau, Germany, June 6, 2013. A modern wastewater treatment plant is being constructed in the Sochi district of Bzugu, so that the city is well prepared for the Winter Olympics. The plant is part of an initiative by the local administration and Moscow's government, which aims to comprehensively increase the capacity of the entire local wastewater system. The project will also lead to sustainable protection of the environment. A piping system conducts the wastewater treated at the plant into the Black Sea so far away from the coast that residents and the environment are not affected.

The Russian Utility Tunnelling expert ZAO PRiSS from St. Petersburg drilled the connection from the Bzugu wastewater treatment plant to the coast and from the coast out to the Black Sea using an AVN2000AH (slurry-supported tunnelling system) made by Herrenknecht. A navigation system from the company VMT GmbH of the Herrenknecht Group took over the precise navigation of the driller. The machine started excavating the sea outfall in the 25 meter deep shaft in February 2012. Tunnelling operations along a length of 1,411 meters were completed in August 2012. High abrasiveness of the mainly encountered limestone meant extreme demands on the excavation tools and the pumps of the slurry circuit. The machine mastered this challenge under the direction of ZAO PRISS without any problems, achieving top daily performances of up to 30 meters per day. The tunnel builders stopped the machine at the target point on 28 August 2012 beneath the seabed around 800 meters away from the coast. Herrenknecht equipped the machine with a "rescue module" to ensure safe recovery. This additional equipment allows the machine to be sealed at the bottom of the sea by means of a bulkhead and separates it from the tunnel using cylinders and the necessary hydraulic supply. The machine can then be lifted by a crane or with balloons to the sea surface.

After recovery of the machine in October, the AVN was completely refurbished and employed in the second project. The plan is to connect a new wastewater treatment plant in the Adler district of Sochi with the sea through a sea outfall. From mid-December 2012 to the end of March 2013 - within 100 days - the AVN2000 installed a total of 2,014 meters of pipeline with top performances of up to 37 meters per day. In the DN 2000 (2.5m) diameter range, this constitutes a previously unachieved world record.

The large-scale infrastructure package in Sochi includes the construction of new roads and railway connections. An EPB Shield (Ø 10,630mm) and a Single Shield TBM (Ø 13,210mm) from Herrenknecht excavated a road tunnel (3.1km) and a railway tunnel (2,8km) in the years 2010 to 2012.
Sea outfall
With the exception of Mexico City and Beijing, almost all metropolitan areas in the world are located next to coastal waters. In addition, more than half of the world’s population lives within 60km from the coastline. Therefore, the construction of outfall tunnels is often an effective and sustainable solution to improve the quality of life in the coastal areas. With the help of sea outfalls, clarified wastewater can be discharged far away from the coast. The self-purifying power of nature is used by first diluting the wastewater, after which micro-organisms start to breakdown the still existing substances. Another important area of sea outfall use are intakes and outlets for desalination plants.
PDF Download
Share on