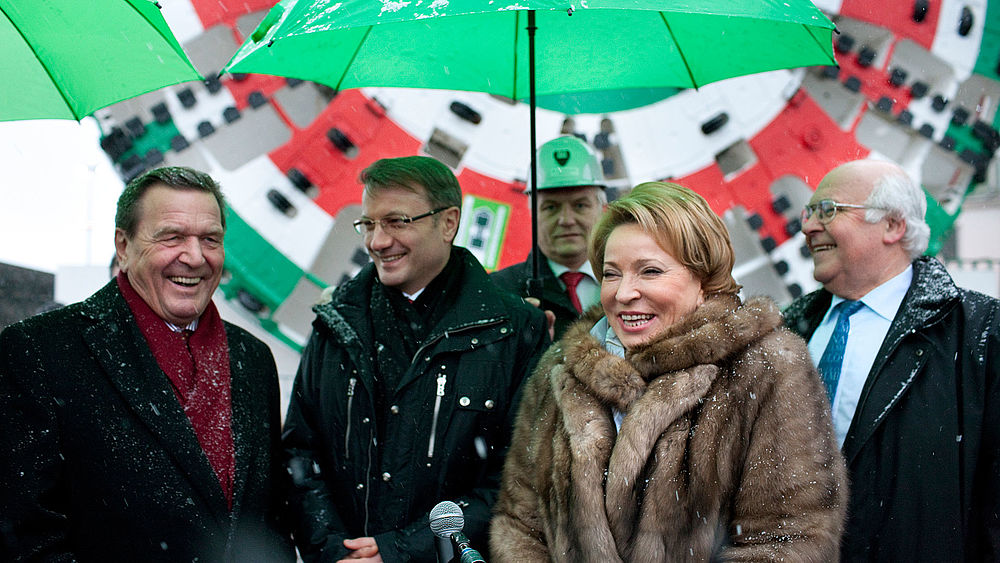 Schwanau, December 2, 2010. St. Petersburg plans the River Newa to be underpassed in the city center in record-breaking size. The idea is for a tunnel boring machine with a diameter of 19 meter to drill and construct the planned Orlovski Tunnel under the river. Its opening is scheduled for 2015. To get to know world market leader Herrenknecht as a possible supplier of the tunnel boring machine, Ms. Valentina Ivanovna Matvienko, Governor of St. Petersburg, together with high-ranking representatives of the city and  Duma of the Russian Federation, travelled to Schwanau yesterday (December 1, 2010). A high political note was accorded to the delegation's visit from the presence of former German Federal Chancellor Dr. Gerhard Schröder and Prof. Dr. Lothar Späth, Chairman of the Supervisory Board of Herrenknecht AG. German Oskorovich Gref, Chairman of the Board and Chief Executive Officer of Sberbank (Russian Federation), also travelled across. Following talks on the project in St. Petersburg, Dr.-Ing. E.h. Martin Herrenknecht, Chairman of the Board of Management of Herrenknecht AG, presented to the delegation the world's largest tunnel boring machine to date (15.62 meter boring diameter). This boring machine is currently awaiting acceptance inspection for the Italian customer at Schwanau. It will set up two 2.5 km long tubes to upgrade the A1 highway between Bologna and Florence. "The technology is very impressive", stated the Governor afterwards.