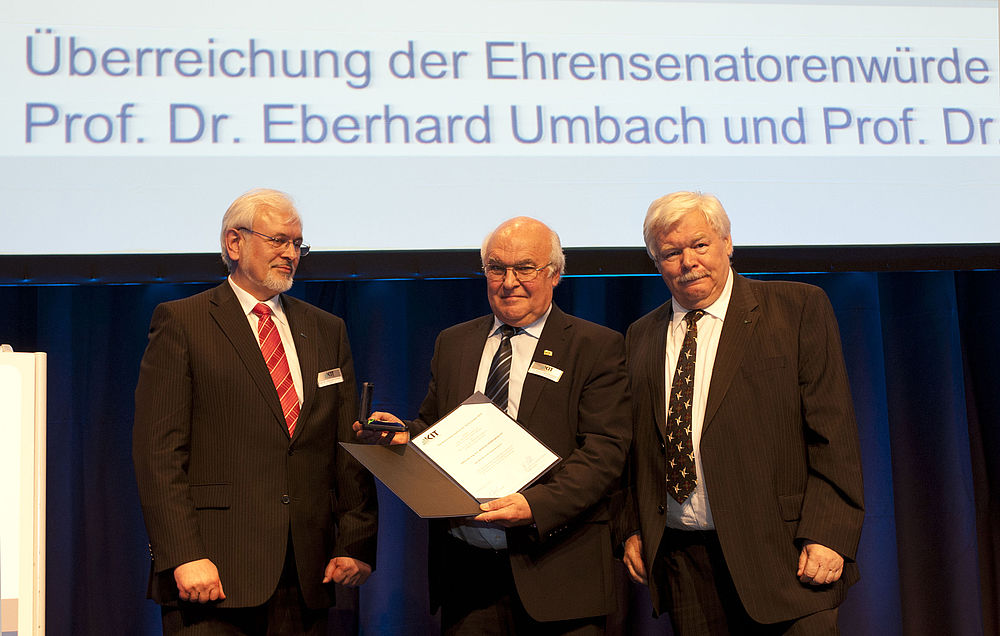 PDF Download
Share on
Dr.-Ing. E.h. Martin Herrenknecht was appointed Honorary Senator by the Karlsruhe Institute of Technology (KIT) yesterday. The KIT was established in 2009 following a merger by the University of Karlsruhe (TH) and the Karlsruhe Research Center. On the occasion of the annual reception, KIT Presidents Prof. Dr. Eberhard Umbach and Prof. Dr. Horst Hippler presented Dr. Martin Herrenknecht with the medal and certificate for his development of tunnelling technology as well as for his support of engineering in particular.

Schwanau / Karlsruhe, March 18, 2011. On Thursday, March 17, 2011, the Presidents of the Karlsruhe Institute of Technology (KIT), Prof. Dr. Eberhard Umbach and Prof. Dr. Horst Hippler, appointed Dr.-Ing. E.h. Martin Herrenknecht an Honorary Senator. In his laudation within the framework of the annual reception, Prof. Dr. Horst Hippler had the following words of praise: "In his capacity as an engineer, Dr. Martin Herrenknecht has made a decisive contribution toward the development of tunnelling technology with his company playing a leading international role in this area". Dr. Martin Herrenknecht was also honored for his commitment to society several times. At the KIT, he has been supporting the Civil Engineering Faculty in particular for many years. For example, Herrenknecht AG has funded the Chair for Technical Petrophysics in the area of Geothermics at the Faculty of Civil Engineering, Geo- and Environmental Sciences for a period of five years, starting in 2008, explained Prof. Dr. Hippler.

Honorary senatorships have a long tradition at the KIT. Introduced as early as 1925 at the then Technical University of Karlsruhe with the aim of distinguishing personalities with special achievements as regards the college, the University of Karlsruhe (TH) and the Karlsruhe Research Center merged to form the Karlsruhe Institute of Technology (KIT) in 2009. Dr. Martin Herrenknecht is the first person to be appointed Honorary Senator in the wake of this amalgamation.

This is Dr. Martin Herrenknecht's second prize in Karlsruhe: in 2002, he was awarded the 1st Karlsruhe Innovation Award for Construction Endeavours by the Society of Friends of the Institute for Technology and Management in Constructrion, Karlsruhe University (Technical Institute). Furthermore, the founder and current Chairman of the Board of Management of Herrenknecht AG was also presented with an honorary doctorate (Dr.-Ing. E.h.) by the Carolo-Wilhelmina Technical University in Braunschweig in 1998 as well as receiving the Cross of Merit, 1st Class of the Federal Republic of Germany in 2007.