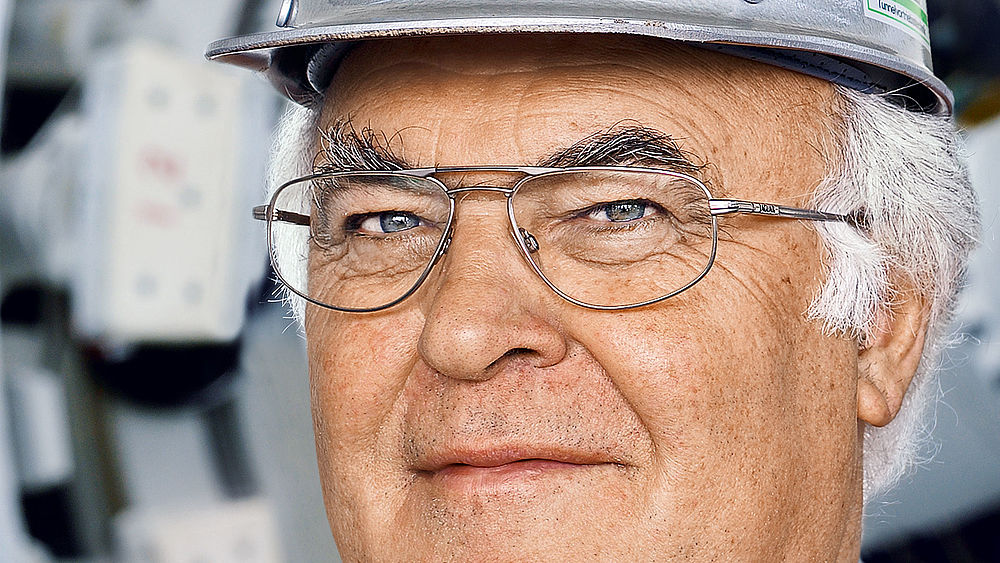 The most significant German technology prize was awarded to Martin Herrenknecht

Martin Herrenknecht builds the world's largest boring machines. His tunnel boring machines are top-notch when it comes to spectacular projects such as the Gotthard Base Tunnel, the fourth tube of the Elbe Tunnel in Hamburg, and, more recently, a tunnel deep beneath the Bosphorus. The Werner von Siemens Ring Foundation has now paid him tribute for his outstanding technical achievements and awarded him the most significant prize for technology in Germany, the "Werner von Siemens Ring".

Back in 1975, Martin Herrenknecht (a graduate engineer and honorary doctor) started his own small business – which has now become a medium-sized enterprise – by opening an engineering office. He then developed the first machine types (MH 1 to 3) for mechanized pipe jacking. In December 1977, he established the limited liability company Herrenknecht GmbH. Procedures and machine pipe jacking techniques were progressively invented or further developed. Today, Herrenknecht is the world leader in terms of technology and market shares, and he provides the most state-of-the-art tunnel boring systems for all kinds of ground and in all diameters from 0.10 m up to 19 m. During the centennial project that was the boring of the Gotthard Base Tunnel, four Herrenknecht tunnel boring machines secured and drilled more than 85 km of new tubes. When the machine broke through after drilling this tunnel of twice 57 km in length, it even made the front page of the New York Times. Another historical milestone was achieved with the successful breakthrough of the Eurasia road tunnel in Istanbul in August 2015. It was the first time ever that such a large and efficient tunnel had been built under such extreme conditions under water: at its deepest, 106 m beneath the Bosphorus, the tunnel boring machine (13.66 m in diameter) had to resist a pressure of up to 11 bars without being damaged. The geological conditions along the 3.34 km route were exceptionally complex and varied.
Martin Herrenknecht's strong innovative capacity and his huge success as an engineer were the decisive factors that led to us awarding him the Werner von Siemens Ring," explained Prof. Dr. Joachim Ullrich, President of the Physikalisch-Technische Bundesanstalt (PTB) and also President of the Werner von Siemens Ring Foundation Board. Prof. Dr. E. h. Manfred Nußbaumer, member of the Werner von Siemens Ring Foundation Board, emphasizes: "One of his outstanding strengths is to keep adapting his machines individually to the most demanding ground conditions with incredible inventiveness, which has earned him his roaring success over the last few years." Martin Herrenknecht will receive the Werner von Siemens Ring on 13 December 2016 within the framework of a function at the Berlin-Brandenburgische Akademie der Wissenschaften.
Dr.-Ing. E. h. Martin Herrenknecht Martin Herrenknecht was born in Lahr (Baden-Württemberg, Germany) on 24 June 1942. Whereas his older brother took over the family business (a saddlery) in their hometown Allmannsweier/Schwanau, Martin Herrenknecht graduated in mechanical engineering at Konstanz University of Applied Sciences. His professional career first took him to Switzerland, later to Canada, and then back to Germany. In 1971, Martin Herrenknecht became the Director of the mechanical engineering department of the Huttegg large-scale construction site where Seelisberg Tunnel (Switzerland) was being built over a length of 9 km using the world's (then) largest tunnel boring machine. Martin Herrenknecht later established his own business by opening an engineering office in 1975; two years later, he founded the limited liability company Herrenknecht GmbH in nearby Schwanau with DM 25,000 seed money his mother lent him. In 1988, Herrenknecht GmbH became an incorporated company whose CEO has been Martin Herrenknecht ever since its creation. Today, Herrenknecht AG employs approx. 5000 staff, trains more than 150 young people and had a total operating performance of EUR 1174 million in 2014. The family business is the world leader in the field of mechanical pipe jacking. Herrenknecht is strongly committed to education and the support of young professionals in the technical and scientific fields. For many years, Herrenknecht and his company have been supporting educational institutions for natural and technical sciences in various ways; they also support initiatives for young professionals' development as well as programs for general technical training – at colleges and universities, but also at a local high school, the Max-Planck-Gymnasium, in Lahr or via an endowed professorship at the Karlsruhe Institute of Technology (KIT). Martin Herrenknecht has already been awarded numerous prizes and distinctions, including an honorary doctorate from the Technische Universität Braunschweig in 1998, the Federal Cross of Merit 1st order from the Federal Republic of Germany in 2007, and the German Gründerpreis (an award for entrepreneurs) in the category "Lifetime achievement".
The Werner von Siemens Ring Foundation Honoring lifetime achievements in technology and natural sciences and, in association with that, supporting young professionals are the Foundation's declared goals. For almost a century, the Werner von Siemens Ring and the people who have been decorated with the Ring have been important points of reference and have motivated generation after generation of researchers in the technical and the natural sciences. This has been possible thanks to the commitment of, besides the people decorated with the Ring, the presidents and directors of the Physikalisch-Technische Bundesanstalt (PTB), the Deutsche Forschungsgemeinschaft (DFG), the Fraunhofer Gesellschaft, the Max Planck Society, the Stifterverband für die Deutsche Wissenschaft, the Federation of German Industries (BDI) and the Deutscher Verband Technisch-Wissenschaftlicher Vereine (DVT). The patron of the Foundation is the Federal President of Germany.
More information (only in German): www.siemens-ring.de
PDF Download
Share on