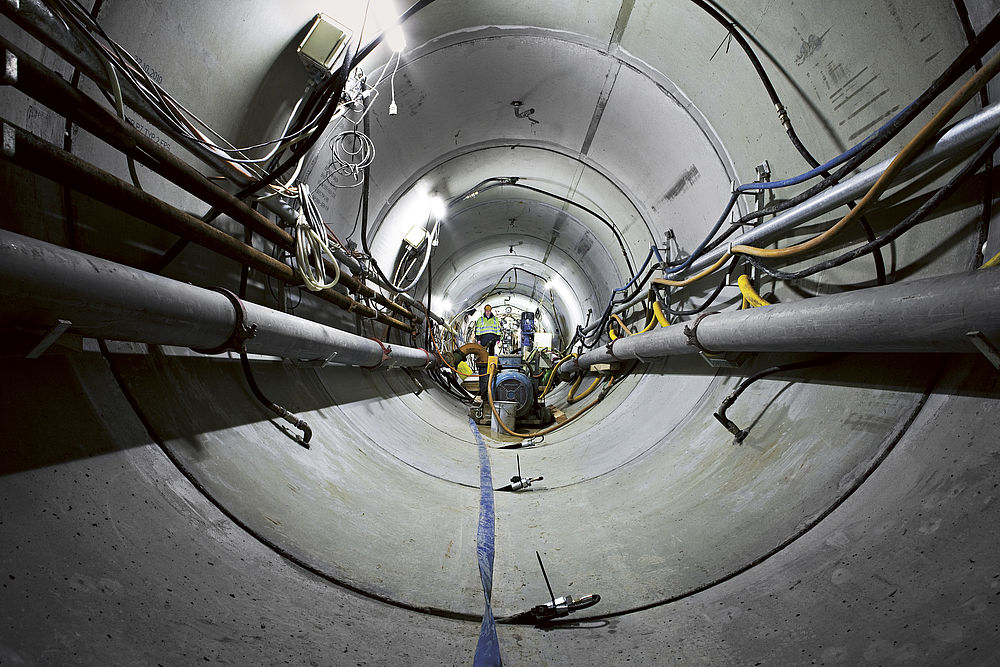 In June 2012 the Bernese energy supply company Energie Wasser Bern (ewb) began with the gradual commissioning of the new Forsthaus energy center. The production concept of district heating, steam and electricity is unique in Switzerland and implements the federal capital’s sustainable energy strategy. A tunnel boring machine from Herrenknecht (AVND, diameter 3.6 m) excavated two utility tunnels to the nearest district heating hub, all in all more than 500 meters in length.

Bern, Switzerland / Schwanau, Germany, August 24, 2012. The Swiss federal capital Bern has set itself the goal of supplying the population and business with electricity entirely from renewable energy sources by 2039. This is the result of a referendum in the year 2010 that helps Bern take a pioneering role in comparison with other Swiss municipalities. In June 2012 the energy supplier Energie Wasser Bern (ewb) reached a milestone on the way to this goal. It gave the go-ahead for the commissioning of the newly built Forsthaus energy center. With a planned start in early 2013, it will replace a 60-year-old waste incineration facility and produce about 290,000 megawatt hours (MWh) of district heating, 40,000 MWh of steam and 360,000 MWh of electricity per year. Among other things, this will cover about a third of Bernese electricity requirements.

A first in Switzerland is the combination of a waste incineration facility with a wood-fired heat and power station and a combined gas and steam power plant. These are complemented by a photovoltaic system on the roof of the energy center. The fresh, scrap and waste wood for utilization in the plant is to be entirely locally sourced in order to keep transport distances short. With the Forsthaus energy center Energie Wasser Bern is focusing on efficiency and renewable and independent energy. According to ewb the new plant will reduce the total CO2 emissions for Bern’s power supply by 57,000 tonnes per year.

The specialists from construction company Implenia Bau AG used a 130 tonne Herrenknecht tunnel boring machine (TBM) to excavate two tunnels for district heating, steam and electricity. They run at a depth of between seven and 18 meters through gravelly and clayey subsoil and connect the Forsthaus energy center to the district heating network. In the first 485 meter long section the AVND2500AH type microtunnelling machine (diameter 3,600 mm) crossed beneath the SBB railway tracks at the nearby freight depot, where it was essential that no subsidence should be caused. The underground team steered the AVND from Herrenknecht so precisely that ongoing rail operations were not disturbed. Machines of this type are successfully used worldwide in the construction of supply and disposal tunnels; they are ideal for tunnelling through groundwater and can work in a wide range of soil geologies. The cutting wheel excavates the soil, which is transported out of the tunnel via slurry lines. At the same time the next pipe segments to secure the tunnel are pushed forward from the launch shaft using the pipe jacking method. In this way the pipeline is pushed forward together with the machine.

After only nine weeks of tunnelling and the first successful breakthrough on the Bernese construction site, in the intermediate shaft the drilling team turned the Herrenknecht TBM 90 degrees in the direction of the next section. For the second excavation the supply logistics for the machine (for example, the cycle of delivering and removing the flushing liquid) had to be adapted in such a way that the aboveground equipment (for example, the separation plant) could remain in the original launch shaft. On the 80 meter long path to the final destination a 300 year old oak tree had to be passed under without damaging its roots. Following successful completion of the tunnelling work in 2011 the lines for district heating, steam and electricity were installed.

In early 2013 the new Forsthaus energy center will be connected to the district heating network and normal operations will begin. Parallel to this, demolition work around the old waste incineration facility will already be underway. Noise and odor pollution will thus be considerably reduced for local residents and space will be created for a new residential development in the Swiss capital Bern.
PDF Download
Share on