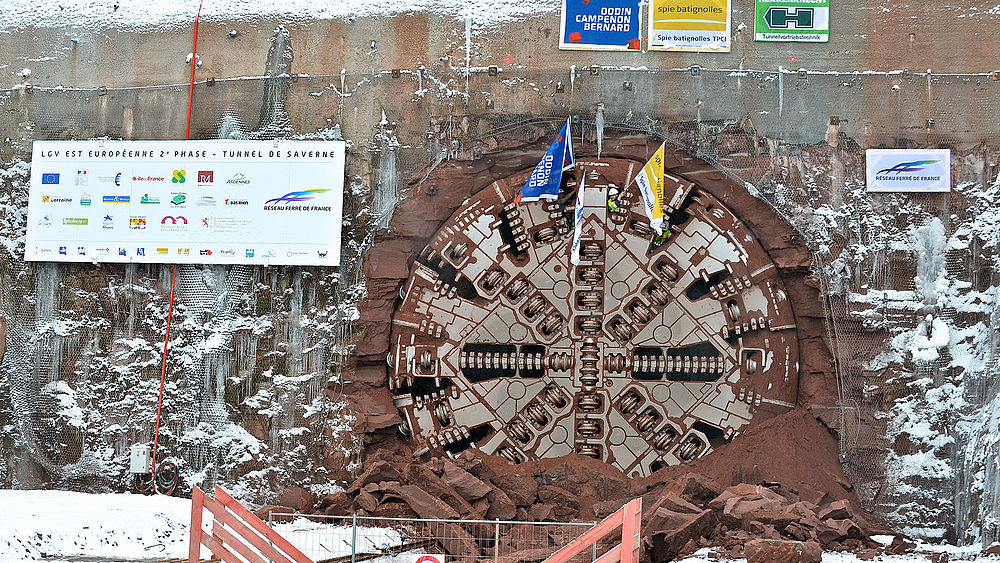 Several months earlier than planned, on February 25, 2013 tunnel boring machine Charlotte completed excavation for the two tubes of the »Tunnel de Saverne«. During the tunnelling of the second tube, the site teams achieved a record performance of 1,014 meters in 30 days. Overall, the TBM completed a distance of nearly eight kilometers in hard and unconsolidated rock. The rail tunnel is part of the section on the TGV Paris-Strasbourg line currently being expanded.

Schwanau, Germany / Ernolsheim lès Saverne, France, March 7, 2013. For tunnelling under the Vosges Mountains the French construction consortium Spie Batignolles TPCI – Dodin Campenon Bernard used a tunnel boring machine (TBM) from Herrenknecht. The TBM began excavation of the nearly four kilometer long north tube on the eastern side of the Vosges at the launch portal near Ernolsheim lès Saverne in November 2011. Two months ahead of schedule it was able to complete excavation of the first tube on the west side of the Vosges in late June 2012. During the advance the site teams achieved daily best performances of up to 46 meters.

After the breakthrough of the first tunnel, the machine was disassembled and set up ready to go again at the launch portal near Ernolsheim lès Saverne. In late September 2012 "Charlotte" began with the excavation of the southern tube. During the five months of tunnelling, the site teams exceeded their daily best performances of the first tube: in one month they achieved a record performance of 1,014 meters in 30 days.

The Herrenknecht tunnel boring machine (convertible EPB Shield S-670, Ø 10,010 mm) handled two different soil types. It worked through unconsolidated rock (a mixture of sandstone and shell limestone) in the closed EPB (earth pressure balance shield) mode and through hard rock (red sandstone) in open mode. The French TGV currently takes two hours and 20 minutes from Paris to Strasbourg. Further expansion eastwards over 106 kilometers through Alsace to Strasbourg is running at full speed in order to shorten the journey time for passengers by 30 minutes from 2016.
PDF Download
Share on