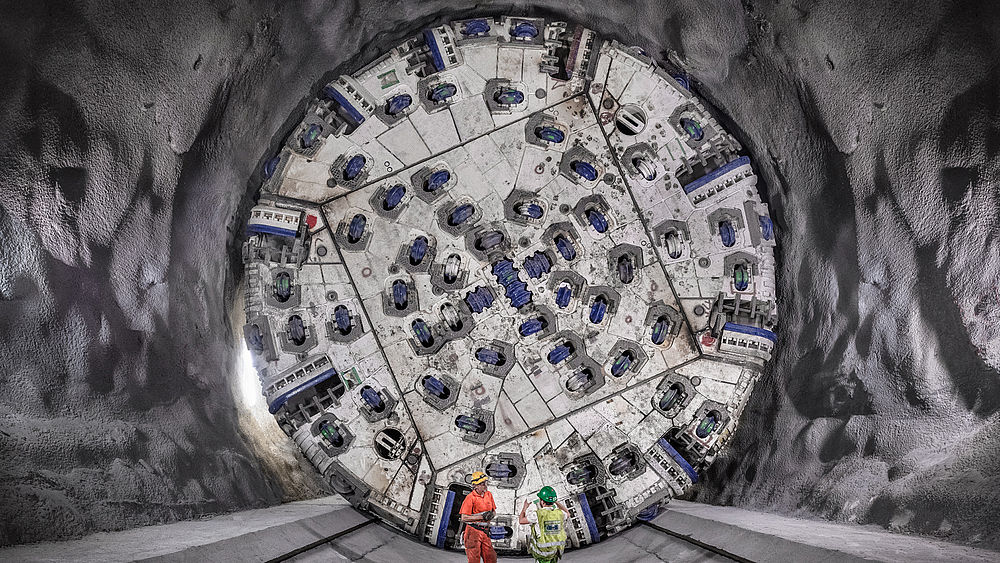 Advance record at the Brenner Base Tunnel

The miners in the Brenner Base Tunnel are pushing ahead rapidly with the major rail project. On Wednesday, March 31, 2021, they achieved a new record while excavating the main tubes in South Tyrol: 860 meters of tunnel bored and lined in one month.

n the Italian construction lot "Mauls 2-3" of the Brenner Base Tunnel, three Herrenknecht tunnel boring machines (TBMs) are boring from south to north. They are excavating the two main tubes as well as an exploratory and later service tunnel 12 meters below. In March 2021, a new record was set by one of these three machines: the Double Shield TBM (Ø 10.65 meters) named "Virginia" covered 860 meters in one month. The contracting joint venture BTC S.c.a.r.l. (Astaldi S.p.A., Ghella S.p.A., P.A.C. S.p.A. and Cogeis S.p.A.) thus achieved a peak advance rate at the Mauls jobsite. For March 2021, the Brenner Base Tunnel project owner, Austrian-Italian BBT SE, announced an average daily advance rate of 27.7 meters for "Virginia". The daily best performance was 36.75 meters.

Dr. Matthias Flora, Sales and Project Manager at Herrenknecht, congratulated the team on the jobsite: "Our customer BTC's crews are absolute top professionals in their field. Congratulations and our utmost respect for this achievement!" By early April 2021, the two machines in the Brenner main tunnels had already covered over 50% of the total distance toward their lot boundary. In stable geologies, Double Shield TBMs are predestined for good tunnelling performance. As the TBM bores, the excavated tunnel is concurrently lined with concrete segments.

At a total length of 64 kilometers, the Brenner Base Tunnel being built under the direction of Austrian-Italian BBT SE will be the longest underground rail link in the world. It crosses beneath the Alps between Innsbruck in Austria and Franzensfeste (Fortezza) in South Tyrol/Italy as a particularly efficient flat trajectory, that is, with very low gradients.