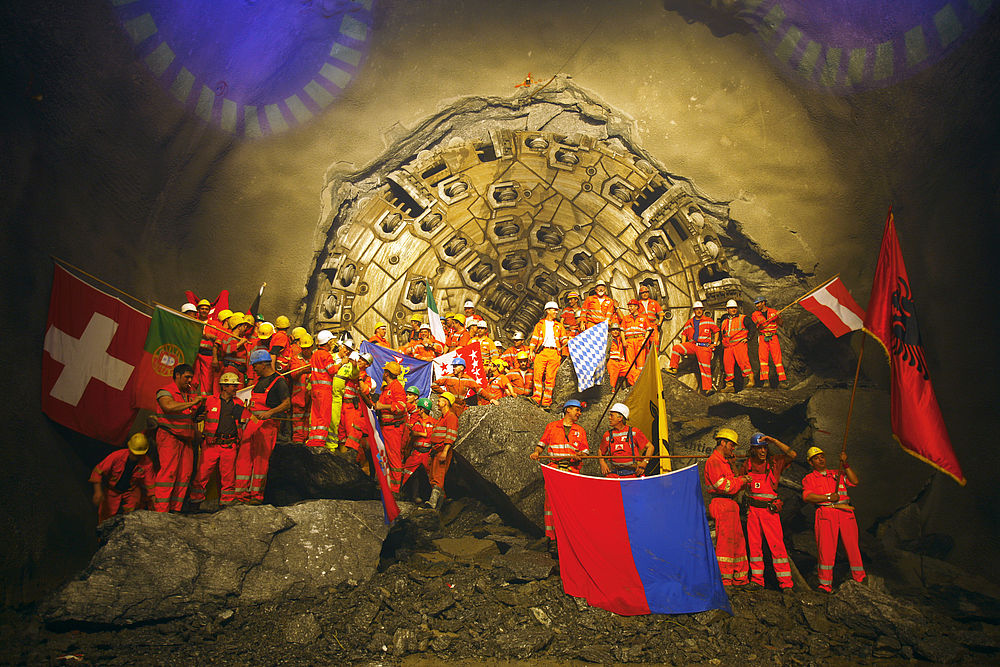 World Record along the entire route

PDF Download
Share on
Following final breakthrough in the western tube, the two 57-kilometer main tubes of the Gotthard Base Tunnel are now fully excavated. Yesterday, Wednesday, March 23, 2011, miners commenced final boring of the world's longest railway tunnel with the Herrenknecht TBM "Heidi" (Gripper TBM, diameter 9.43 m). After a total of 25.2 km, the rock wall was broken through at 12:20 p.m., finally clearing a continuous route through the Alps. Tunnelling had already been successfully completed in the northern sections in 2009. Final breakthrough in the parallel eastern tube was celebrated with great international media presence on October 15, 2010.

Sedrun, Switzerland / Schwanau, Germany, March 24, 2011. The miners were both proud and loud as they celebrated the final TBM breakthrough once "Heidi" had cracked the last few centimeters of rock at 12:20 p.m. yesterday. With maximum precision, they reached their target with the S-211 Herrenknecht tunnel boring machine (Gripper TBM, diameter 9.43 m) on the 11.1-kilometer contract section from Faido to Sedrun. The deviation from the target amounted to a mere 3 millimeters vertically, horizontally an absolute precision landing was achieved: 0 millimeters deviation.

Yesterday's breakthrough in Sedrun represents a decisive milestone in this mammoth construction project with operation planned for 2016. The new Gotthard Base Tunnel enables Switzerland to create a monumental, future-oriented construction in terms of transport policy. When finished, the 57-kilometer dual tunnel through the Gotthard Massif will be the longest in the world, bringing Europe closer together along its north-south axis while doubling annual goods transport capacity to around 40 million tonnes.

For mechanized tunnelling, exclusively Herrenknecht TBMs were used for the two main tubes of the Gotthard Base Tunnel. The four Herrenknecht Gripper TBMs started tunnelling in 2003. In all, their cutting wheels excavated around 10.5 million cubic meters of rock, boring and securing more than 85 km (around 75%) of the main tubes. Tunnelling teams deployed by the Joint Venture TAT, Tunnel AlpTransit – Ticino (Implenia Industrial Construction, Alpine Bau GmbH, CSC Impresa Costruzioni SA, Hochtief AG, Impregilo SpA) in the south and the Joint Venture AGN, Arbeitsgemeinschaft Gotthard-Basistunnel Nord (STRABAG AG Tunnelbau Schweiz (CH) / STRABAG AG (A)) mastered tunnelling with great success despite encountering some unanticipated difficulties. Tunnelling in the south: In January and February 2003, "Sissi" and her sister machine "Heidi" commenced boring on the southern section in Bodio. Almost immediately, after only 200 meters, they were slowed down by geological fault zones featuring brittle rock, so-called kakirites. The Gripper TBMs used are designed for very hard rock and this type of geology is too unstable for this type of machine making good performance rates practically impossible. Every meter driven had to be secured in a complex manner. It was not until August 2003 that the machines were able to leave the fault zones after around 400 meters. Three years later, in September and October 2006, the breakthrough to the multifunctional station in Faido was celebrated after tunnelling 13.4 km in the eastern tube and 14.1 km in the western tube.

Following extensive revision work and diameters extended from 8.83 m to 9.43 m, the two hard rock TBMs started off again in the direction of Sedrun in July and October 2007. The Piora Basin was easily passed in 2008 and 2009. During the planning stage for the Gotthard Tunnel, this was the most feared section until it transpired that gypsiferous cap-rock sealed the pressurized sugar-grained dolomite toward the bottom. From March to July 2010 however, boring was halted by rock collapsing in the western tube and the subsequent stabilization measures required. The final breakthrough by "Sissi" in the eastern tube came on October 15, 2010. Anticipated by numerous camera teams, photographers and celebrity guests, the breakthrough was covered live with international media reports sending an astounding echo around the world.

Yesterday's breakthrough celebrations in the western tube were much more low-key and primarily involved the miners and other major project participants. After all, this second breakthrough also represents an end to the "Gotthard era" for the tunnelling teams, claims Renzo Simoni, CEO at AlpTransit Gotthard AG. Like her "colleague" in the eastern tube last year, the next few weeks will see "Heidi" being dismantled and transported back through the tunnel.

Tunnelling in the north: The tunnel boring machines had been deployed inside the mountains on the northern side since late 2003 and early 2004. Despite encountering difficult geology such as the Intschi Zone, these TBMs achieved top speeds of up to 40 meters a day on their way from Amsteg toward Sedrun. In June and October 2006, "Gabi 1" and "Gabi 2" (both Herrenknecht Gripper TBMs with diameters of 9.58 m) reached their section boundary nine and six months earlier than planned after tunnelling 10.7 km. In spring 2008, they started off on their second tunnelling mission along the northernmost section from Erstfeld toward Amsteg where they turned out to be true mountain sprinters, boring and securing up to 56 meters of tunnel in a single day, and reaching their destination near Amsteg in June and September 2009 - yet again 6 months earlier than planned and displaying maximum precision. After 7.1 km of tunnelling, the horizontal and vertical deviations from the tunnel axis were a mere 4 and 8 mm, respectively. Once the tunnel lining, infrastructure systems and railway installations has been completed, the first high-speed trains are to speed across – or through – the New Railway Alp Crossing (NEAT) at 200 to 250 kilometers an hour in 2016. This will reduce travel time between Zurich and Milan by an hour to 2 hours and 40 minutes. Swiss Railways are also counting on advantages in terms of efficiency for goods transport in particular. Transferring goods transport from the road to the railways should make, for example,  transit between Germany and Italy much more efficient. To achieve this, Switzerland is also calling for Germany to expand its railway infrastructure along the Rhine as agreed by contract.
PDF Download
Share on