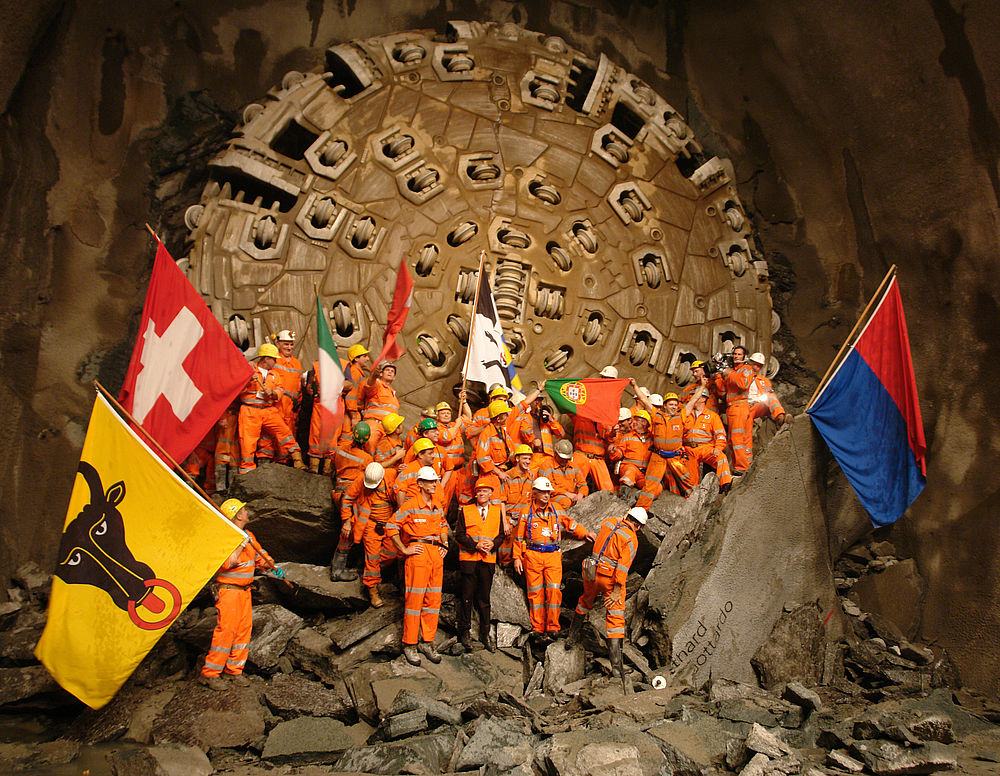 PDF Download
Share on
The breakthrough at the Gotthard Base Tunnel on October 15, 2010 in the Eastern tunnel marks the most significant milestone on the way to completing the longest railway tunnel in the world. With the 2 times 57 kilometer long epoch-making project, Switzerland is connecting northern and southern Europe by rail through the Alps. After completion of the project, Herrenknecht Gripper tunnel boring machines have excavated and secured more than 85km of the main tubes.

Sedrun, Switzerland / Schwanau, Germany, October 15, 2010. With the new Gotthard Base Tunnel, Switzerland creates a monumental and trailblazing construction in terms of transport policy. The 2 times 57 kilometer long railway tunnel through the Gotthard Massif will be the longest in the world. It will bring European passenger traffic networks closer along a north-south axis and double the freight traffic capacity to approx. 50 million tonnes per year. Miners and all project participants were enthusiastic, when the tunnel boring machine “Sissi” (Herrenknecht Gripper TBM S-210, ø 9.43m) achieved breakthrough in the eastern tube at the section boundary near Sedrun.

The four Gripper TBMs started tunnelling in 2003. Since then, the cutterheads of the TBMs have “munched” around 10.5 million cubic meters of rock. In total, they excavate and secure more than 85 kilometers (approx. 75%) of the main tubes. The tunnel teams of the JV TAT, Tunnel AlpTransit – Ticino (Implenia Industrial Construction, Alpine Bau GmbH, CSC Impresa Costruzioni SA, Hochtief AG, Impregilo SpA), in the south and the JV AGN, Arbeitsgemeinschaft Gotthard-Basistunnel Nord (STRABAG AG Tunnelbau Schweiz (CH) / STRABAG AG (A)) in the north, successfully mastered the excavation works and unforeseen difficulties. At the very beginning of tunnelling – after only 200 meters – work along the southern section was interrupted. The two TBMs that set off from Bodio – affectionately known to the tunnelling teams as “Sissi” (S-210) in the eastern tube and “Heidi” (S-211) in the western tube – encountered geological fault zones in brittle rock, so-called kakirites. Such geological conditions are too soft for Gripper TBMs, which are designed for very hard rock, and make rapid tunnelling progress almost impossible. Every meter of excavated tunnel must be secured in a complex process. The machines could not leave these fault zones behind them until August 2003, after around 400 meters of tunnelling.

Further works were also marked by ups and downs: Good monthly tunnelling performances of 560 meters were followed by advance rates of only 140 meters per month. In June 2005 (north side), loosened rock mixed with mountain water infiltrated the cutterhead in the western tube. The TBM had to be freed and could only resume tunnelling in November. And between March and July 2010, unconsolidated rock and ensuing rock support measures interrupted the excavation work.

2006: The year of the first breakthroughs.
In June and October 2006, the construction teams in the north celebrated the end of tunnelling in the Amsteg – Sedrun section with a spectacular performance.  The machines sped towards the end of the construction lot six and nine months ahead of schedule. But il all ended with an anticlimax. Just before the end of the lot, they met with a geological obstacle – kakirite. This is why the TBMs were dismantled in advance in the solid rock zone. The workers then transported the machine components out of the tunnel with the tunnel train.

In fall 2006, the two Gripper TBMs in the south, with diameters of 8.83 meters, also achieved breakthrough with the required precision at the Faido multifunctional station. With new and larger cutterheads (ø 9.43m) “Sissi” and “Heidi” resumed excavation in July and October 2007, tunnelling northwards from Faido to Sedrun. Along a section which included the Piora Basin: A funnel-shaped formation filled with sugar-grained dolomite and water, which reaches deep into the rock of the mountain range that has been thoroughly pre-explored. Based on the probe drill results, geologists concluded that the bottom of the Piora Basin was sealed with gypsiferous cap-rock. And so, on October 12, 2008, Sissi reported: Piora Basin successfully crossed and its sister machine soon followed suit.

56 meters in just 24 hours.
In late summer 2009, a Gotthard tunnelling record could be set in the north: In the space of only 24 hours, “Gabi 2” chomped its way through no less than 56 meters of mountain – a world record for a tunnel boring machine of such dimensions.  On June 16 and September 16, 2009, the construction site teams in the north reached their destinations in Amsteg after only 18 months – six months ahead of schedule. This breakthrough was a prime example of the tunnel builders’ and the machines’ precision: Both TBMs had deviated from the ideal line, horizontally by 4 millimeters and vertically by 8 millimeters – millimeter precision in the truest sense.

With the main breakthrough that occurred on October 15, 2010 in the eastern tube, an “unhindered view of the Mediterranean” has become a reality. Breakthrough in the western tube is expected to take place in spring 2011. The first high-speed trains are scheduled to speed through the new alpine transversal tunnels at speeds of 200 to 250 kilometers per hour in 2017. The travel time in passenger traffic between Zurich and Milan will be cut from 4 hours and 10 minutes to 2 hours and 40 minutes after completion of the Zimmerberg, Gotthard Base and Ceneri Base Tunnels. Switzerland’s Federal Railways expects time gains, in particular, for freight traffic. The concept of a flat rail link at a maximum altitude of 550 meters above sea level, truly at the foot of the St. Gotthard Mountain, allows the operation of significantly longer and heavier freight trains: 4,000 tonnes instead of today’s 2,000 tonnes.