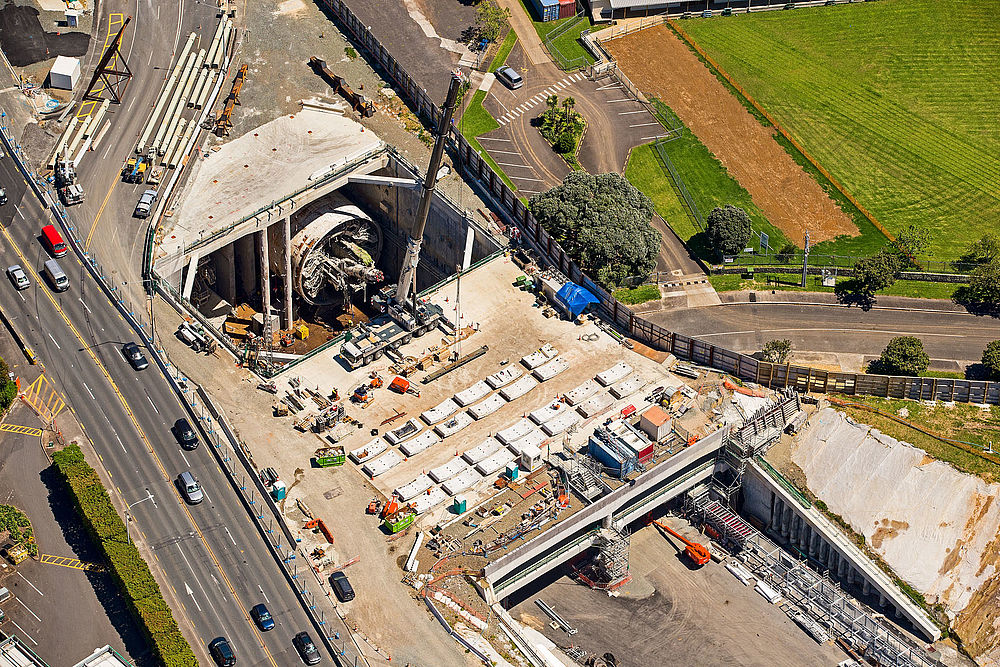 PDF Download
Share on
One of the world's largest tunnel boring machines (TBM) has driven two 2.4-kilometer tunnel tubes for New Zealand's most ambitious “Waterview Connection” road-building project. Work on and by the machine was followed with public interest for almost three years, including a spectacular 180-degree about-turn. And now it's time to say farewell with disassembly work complete five months after the successful breakthrough. Core components of the machine with a diameter of 14.41 meters are now returning to the manufacturer, Herrenknecht, where they will be stored until required for use in new infrastructure projects.
March 31, 2016 Auckland / Schwanau It’s time for fans of Alice, the S-764 tunnel boring machine, to say farewell. The last components of its star, the Herrenknecht EPB Shield S-764 with a diameter of 14.41 meters, are to be transported away from the site in Auckland, New Zealand. Alice created the shell of a road tunnel for the major “Waterview Connection” project in the heart of the mega-city, which will link two of the most important state highways, while securing a firm place in people's hearts at the same time. Many New Zealanders followed the assembly, advance and disassembly of one of the world's largest tunnel boring machines via Twitter, YouTube and on Facebook.
Core components such as the main drive, erector and conveyor screw will arrive next week in southern Germany at Herrenknecht, the manufacturer, where the individual parts will be processed professionally and retained for use in future projects. Herrenknecht is an international market leader in the area of tunnel boring technology and has already delivered boring machines with large diameters for infrastructure projects to 63 countries, whereby the machines are specially coordinated to the respective project and geology.
Apart from the size and heterogeneous geology, particular project requirements in the development of Alice also included an extremely ambitious timeframe and the tight spatial conditions on the site: half-way along, following completion of the first tubes, the machine had to be turned through 180 degrees on an area of merely 25 x 39 meters right beside the highway. In view of the turning manoeuver, the TBM and its gantry had been designed to be short and compact right from the start. In addition, a second, shorter gantry was used for the first 300 meters after the turn until enough space had been created for the regular second gantry. The gantry for driving the tunnel floor was disconnected from the TBM to prevent interaction during downtimes. And representing a huge advantage in terms of time.
The gigantic boring machine, called after the main character in “Alice in Wonderland”, drove two tunnel routes, each with a length of 2.4 kilometers, in just under 21 months. With records of 28 meters a day and 130 meters a week, the international drilling team stayed well within the budget and on schedule. And the times calculated for turning the machine as well as assembly and disassembly were also maintained in full or even improved on in some cases. Brett Giddon, Highway Manager at the New Zealand Transport Agency commissioning the project, was impressed: “Alice will leave behind a lasting legacy”, he claimed, on the occasion of the breakthrough on October 19, 2015. “The world-class tunnels she helped construct that will benefit Auckland and New Zealand for 100 years and more.”
More than 1,000 people took part in the official breakthrough celebrations. “Everything went to plan, it was a text book breakthrough”, enthuses Tunnel Manager, Chris Ashton. “Our team did real hard work pumping out the meters over various shifts and keeping Alice shipshape to complete its work to world-class standards”. The “Waterview Connection” tunnel project is one of the largest infrastructure projects in New Zealand. It aims to close the gaping gap in the western section of Auckland’s beltway. With three traffic lanes each, the two road tunnel tubes will link the country's two main arteries, Highway 16 and Highway 20, making the 2.4-kilometer connection the longest road tunnel in New Zealand. During a visit in May 2014, Prime Minister John Key called the structure an impressive work of engineering skill. “It will be a fantastic bonus for the road network here in Auckland.” The tunnel represents a time-saving link between the city center and the international airport and is to be open for traffic by 2017 at the latest. Work on tunnel construction as well as assembly and disassembly of Alice can be viewed in numerous time-lapse videos on the client's YouTube channel.
More information and video clips on the project
Project dataMachine data S-764
PDF Download
Share on