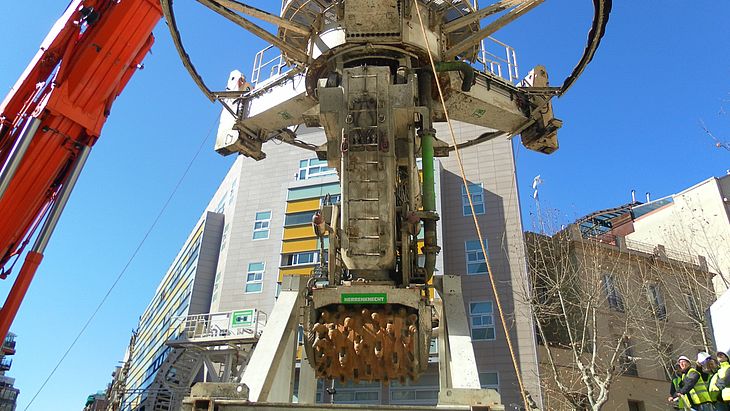 Express trains traveling at top speeds of up to 350 km / h connect Spain’s most important cities – Madrid and Barcelona – to the French border along the new AVE route. The first part of the route went into operation as early as 2008. Since then, the expansion continues gradually. Parts of the high speed rail connections run underground. To furnish the tunnels with the necessary escape exits and ventilation, a total of 6 shafts are sunk on the route from Montcada to Trinitat with 2 Herrenknecht vertical drilling rigs.

The first shaft passed through various geologies, ranging from very soft to extremely hard conditions up to a depth of 56 meters. The most important challenge: the necessity to avoid settlements caused by the shaft construction work in this densely populated area. While the first 15 meters consisted of a loose mixture of sand and gravel, the following 42 meters to the final depth of 56 m had to be bored through 200 MPa hard quartz / slate rock. For this reason, the VSM10000 was operated using two different cutting drums.

During construction of this first shaft, performance rates of 3.5 meters within a 16-hour two shift operation were achieved. The shaft construction work progressed rapidly and safely thanks to parallel shaft sinking and lining with concrete lining rings. The shaft was completed on October 2, 2009. The subsequent shaft was sunk by mid-2012.

In 2015 a second VSM10000 rig from Herrenknecht once again convincingly proved the efficiency of the VSM technology. The machine built an additional shaft for the high-speed rail line and it didn’t stop there. Since 2019 the shaft drilling continues as the same VSM rig is building 3 more shafts for the project.