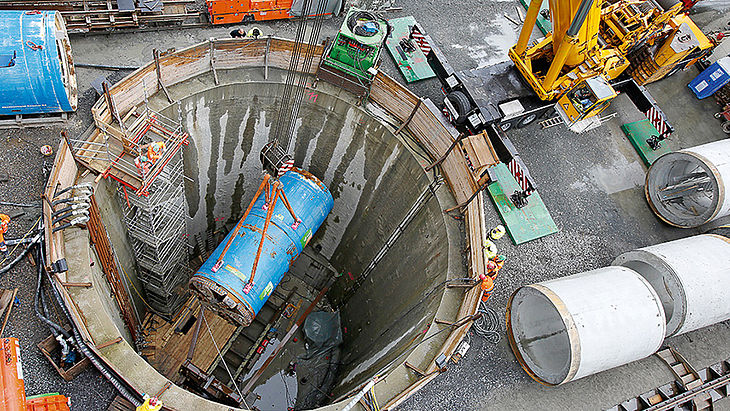 It is a sewage project of superlatives. The River Emscher was considered a "cesspool of the Ruhr": an open channel, extremely polluted with wastewater from coal mining and heavy industry and the feces of local residents. In future an efficient underground pipe and tunnel system newly built by the Emschergenossenschaft water management association will carry the wastewater from a catchment area of 865 square kilometers and around 2.2 million inhabitants to the three central wastewater treatment plants. In addition, through the ecological transformation of the Emscher the quality of life in the Emscher region will be greatly improved for the long term.

The pipe jacking method was mainly used for lining the tunnels. For construction lot 40 with segmental lining, Herrenknecht made the machine technology of two EPB Shields so compact that with a shield diameter of only 3.2 meters there was still room to handle the concrete segments. During tunnelling tight curve radii of up to just 200 meters were dealt with safely and precisely with only a few meters distance of the alignments.

The use of cameras in the machines' crusher areas proved efficient on the Emscher project. While wear of the cutting knives was detected via hydraulic recognition systems, the disc cutters were visually monitored by the camera. In this way it was possible to optimally plan repair cycles and downtime and the construction process was only minimally disrupted.

In addition to sandstones and argillites the soil of the Emscher region consists predominantly of marlstones from the Cretaceous, the so-called Emscher marl. Accordingly, Herrenknecht made the opening ratio of the cutting wheels particularly high to ensure the best possible removal of material taking stone size and the tendency of the soil to be sticky into account. The material flow was aided by a water jet system integrated into the cone crusher that additionally crushes rock or clay soils as required.

Products and know-how to further support tunnelling and optimization of the construction process were supplied by Herrenknecht Group partners: VMT provided navigation systems and the communication and safety system HADES. Herrenknecht Formwork produced concrete segment moulds and MSD supplied a lifting beam and a tilting table for the pipe plant in Gelsenkirchen.

Herrenknecht also systematically refurbishes customer machines and prepares them for the next deployment with project-specific customization. In earlier construction phases a variety of Herrenknecht equipment was used on the feeder lines, including a VSM shaft sinking machine.