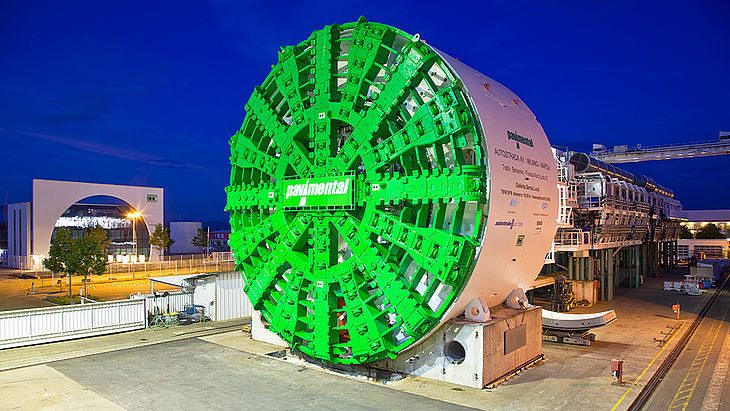 The busy Italian Autostrada A1 highway between Bologna and Florence is getting a relief section over a distance of around 50 kilometers. After the northern section "Variante di Valico" was inaugurated in 2015, work started on the southern extension. The new southern section includes the "Santa Lucia" three-lane highway tunnel, over 7.7 kilometers long on completion. When it goes into operation, southbound traffic (toward Florence) will roll over the new, continuously three-lane alignment, while the existing lanes will be used by northbound traffic.

As previously with the Sparvo Tunnel on the northern section, which was bored between 2011 and 2013, for the “Galleria Santa Lucia" the tunnelling specialists commissioned by the Italian highway company are relying on an Earth Pressure Balance Shield (EPB Shield) from Herrenknecht. As the tunnel is to accommodate three lanes, each 3.75 meters wide, the shield diameter of 15.87 centimeters is particularly large – making the Santa Lucia TBM the European record holder. The tunnel itself is also setting a new record: when commissioned, it will be the longest three-lane road tunnel in Europe.

Excavation work for the tunnel project began in July 2017 and lasted just under three years. In early June 2020 the time had come: near Barberino di Mugello, at the northern end of the tunnel, the 410 tonne cutting wheel of the TBM bored its way back back into daylight. By the time of the successful breakthrough, the miners had covered up to 122 meters per week with the XL machine and excavated a total of around 1.5 million cubic meters of soil and rock.

While excavating the Santa Lucia Tunnel, the TBM, weighing 4,800 tonnes in total, mastered a variety of challenges. On the one hand, there were the changing geological conditions. In addition to marl and limestone on around 75% of the alignment, there were several less stable geological transition zones. In close consultation with the contractor, Herrenknecht equipped the cutting wheel with cutting tools for both harder rock and softer soils.

In addition, typical for this region, sections of the alignment were expected to contain significant amounts of methane gas. Building on experience gained from the Sparvo drive, Herrenknecht therefore designed a safety system that reliably protects the crew, machine and jobsite and includes, for example, the following solutions and systems:

The XL diameter of the "Galleria Santa Lucia" in combination with the 7.5 kilometer long drive put the overall system of the TBM as well as the individual components to a tough test. This is where the Herrenknecht team's decades of experience with large and largest TBM diameters in machine design as well as in service during tunnelling come into play. The huge dimensions and resulting forces and loads in particular demand the highest levels of precision in design, manufacturing and assembly.

Greater safety on the road and less impact on the environment
The large Santa Lucia tunnel, successfully driven with the largest European EPB Shield, is a key project for the new expansion section of the Autostrada A1 highway. Once in operation, the optimized routing on the previously winding mountain section will reduce both the risk of accidents as well as journey times and thus the fuel consumption of the tens of thousands of cars and trucks using it every day.