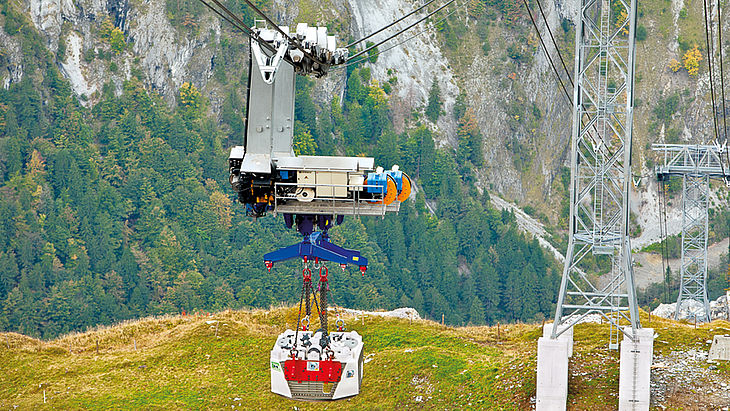 The Muttsee, Tierfehd and Linthal ‎(Glarus canton, eastern Switzerland) hydropower plants of Kraftwerke Linth-Limmern AG currently generate a total of 460MW of environmentally-friendly energy. As part of the "Linthal2015" project, the new Limmern pump storage plant will raise the capacity by 1,000MW.

The plan is for a new, underground designed pump storage plant to pump water from the Limmern lake back into the 630 meter higher Mutt Lake and, when needed, use it for electricity production. The new station is set to have both a 1,000MW pump capacity and a turbine output. This would bring about a rise in capacity from today's 450MW to 1,450MW.

At the heart of this project is the tunnelling of two pressure tunnels each of a length of 1,023 meters. The tunnel alignment runs at overburdens of up to 565 meters mainly through Quintner limestone with up to 120MPa. The steep gradient of 40 degrees (84.7 percent) in the Limmern project demands a solution that reliably prevents under any circumstances the TBM slipping back as the grippers move in the tunnel. State of the art are Gripper TBM equipped with single anti-slip system.

For the Limmern TBM a twin-anti-slip system was developed offering a complete redundancy of available gripper systems. This increases the safety for the personnel, the machine and the construction significantly: In all operating conditions (advancing, standstill and regripping), at least two out of three anti-slip anchor is always securely clamped to the rock. A slipping of the machine can reliably be prevented. The anti-slip anchors work mechanically on the principle of a self-inhibiting knuckle lever. This ensures reliable clamping of the machine to the rock, even in the event of a power failure.

The Herrenknecht Gripper TBM S-575 started tunnelling of the first pressure tunnel in November 2010, reached breakthrough on October 14, 2011 and, afterwards, set to work for the second tunnel. The second tunnel was completed successfully on March 13, 2013.