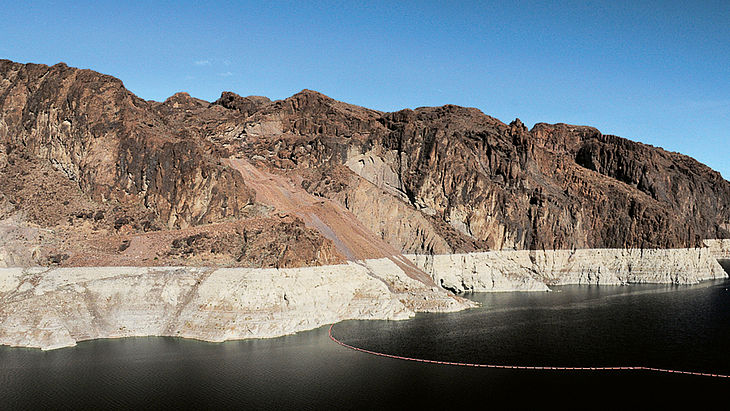 Las Vegas draws 90 percent of its water from Lake Mead, the largest reservoir in the United States. The areas around Las vegas, however, are taking more from the lake than flows into it as snow melt and rain water from the Rocky Mountains. During the 14 years of drought, the water level has dropped by 35 meters. The two existing water intakes for the Las Vegas Valley are therefore in danger of running dry.

The construction of the new, deeper Intake No. 3 is a race against time. A crucial section was completed on December 10, 2014: after three years of tunnelling the Herrenknecht tunnel boring machine (TBM) S-502 (Ø 7.2 Meter) reached its target on the lake bed. Starting from a 180 meter deep shaft it has dug a 4.4 kilometer tunnel under the lake. During this time the machine was subject to water pressure of up to15 bar – a new world record. The previous record of 11 bar had been held by the Herrenknecht multi-mode TBM for the Swedish tunnel project Hallandsås, completed in 2013.

The machine designed for Lake Mead was also a Multi-mode TBM– it could be operated in open or closed mode according to the soil conditions and had considerable additional equipment. Thus the S-502 was ideally designed for the extreme conditions of the project and launched in late 2011 from a 180 meter deep shaft at the lakeside. For months it struggled through shattered rock and clay with full hydrostatic pressure caused by water from the lake. In doing so it withstood pressures of up to 15 bar, an absolute novelty in mechanized tunnelling.

The TBM slaved away through abrasive geological formations, resulting in repeated downtimes to replace wear parts. As soon as the machine reached good, stable subsoil the site crew changes from closed slurry-supported mode to open hard rock mode. In this the multi-mode machine quickly ate its way through the rock at speeds of four or five centimeters per minute and up to more than a hundred meters a week.

Work on Intake No.3 is due for completion in the summer of 2015. The new extraction tunnel will then take the lake water via Intake No. 2 to a drinking water treatment plant, from where it will be supplied to households and businesses.