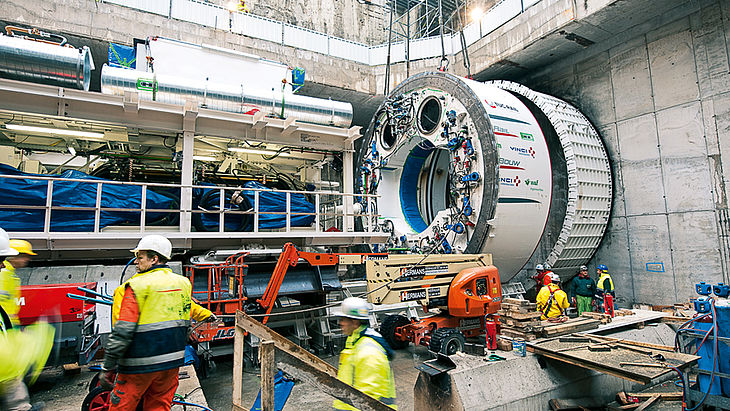 Due to the intensive use of the seaport in Antwerp, in particular on the left riverbank of the Schelde River with an annual container volume of 7.5 million, the region expects a considerable increase in freight train traffic. The rail traffic hub is located on the right riverbank (northern Antwerp). As soon as the new tidal dock is completed, up to 100 freight trains/day will operate between both riverbanks. The new connection would allow the trains to travel between the two sides without leaving the port area. In addition, the operating costs for the trains could be reduced, since the rail route between the larger locations on the left and the right riverbank would be reduced by approximately 22 kilometers.

The "Liefkenshoek Rail Link Project (LHSV)" is one of the biggest infrastructure projects ever undertaken in Belgium. The biggest challenge in constructing the two parallel tunnels was tunnelling under the canal dock. With an overburden of only 1.1 meters, a certain water level had to be retained in the dock to keep the dock open for shipping throughout the construction project. The silty ground under the canal dock was repleced by grout and covered with two heavy, steel reinforced concrete slabs. They would protect against the ships anchors and serve as additional weight, allowing for the crossing of the two TBMs.

Two 6,000-meter-long single-track tunnels were required to be driven by shield tunnelling. The two Mixshields, S-532 and S-533, started their advance in February and April 2010 respectively. Achieving best weekly performances of 230 meters, the Mixshield S-533 broke through into the target shaft on May 16, 2011, after eleven months of tunnelling, followed by S-532, which broke through on July 23, 2011.