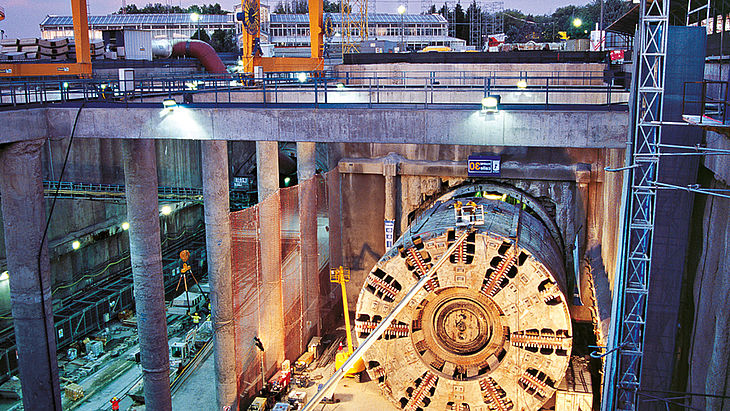 The new urban motorway M-30 was planned to relieve major traffic congestion in Madrid. Its construction entailed boring a 3.5-kilometer three-lane road tunnel through demanding geological conditions of clay and solid gypsum, with upward gradient s of five percent. This was a project that called for the utmost care and precision, because, after all, a densely populated area, rail and metro tunnels had to be tunneled under at distances of only 6.5 meters without causing any "side effects".

Herrenknecht delivered the world's largest Earth Pressure Balance Shield to date, that was tuned for efficient tunnelling. The S-300 excavated with two cutting wheels, that could turn independent from each other in both directions. The inner cutting wheel had a diameter of seven meters and the outer, coaxial cutting wheel came with an excavation diameter of 15.20 meters. By this the huge torque at the start of TBM operation can be gradually introduced into the soil, beginning with the inner cutting wheel as it “hurried ahead”. The torque of 125,268kNm installed on the machine is the highest torque ever realized on a TBM.

In May 2006, the jobsite report records the best weekly rate of 188 meters of newly constructed tunnel. And as early as July 17, 2006 the breakthrough is celebrated on the jobsite in Madrid - after only 25.5 months of construction and 4.5 months earlier than expected. The tunnel is inaugurated in March 2007.