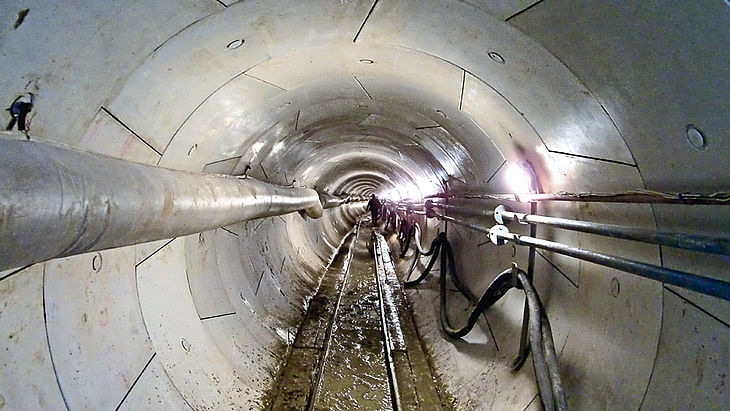 Many kilometers of tunnels have to be built in Moscow for the metropolis' supply with electricity. Additional demand is generated by the fact that long streches of the network is installed above ground and is, therefore, prone to failure due to the harsh climate. Herrenknecht tunnel boring machines set to work.

Among them is an EPB2750. For the segmental lining, Herrenknecht Combisegments™ are used for the first time. They steel reinforced concrete segments with a corrosion-resistant liner incorporated into the segment that provides the necessary corrosion protection for sanitary sewer applications. During the production of Combisegments the liner is installed as a prefabricated glass-fiber reinforced plastic lining in the segment mould. A reduction in construction time thanks to the single pass installation of the tunnel lining with corrosion protection, as well as a reduced excavation diameter make this procedure interesting from an economical perspective. Conventional bolt connections with bolt pockets are no longer needed, since the segments are connected by special anchors. Furthermore, the especially smooth surface allows for an optimal sewer flow.

A Herrenknecht Earth Pressure Shield EPB2850AE crossed through a clayey geology producing a tunnel in the southwest of the city. The segment-lined cable tunnel will supply a suburb that is one the most expensive and sought-after anywhere in Moscow with electricity. The electricity will be generated by the modern Nikulino power station, which was put into operation in 2008.

An AVND2500AH Micromachine has been at work on the improvement of Moscow’s infrastructure in the eastern district of Pervomayskaya. Tunnelling in difficult geology, comprising clay, loam and sand, under old and densly built-up areas as well as under roads the machine bored a cable tunnel for the local electricity supply. At three meters outside diameter, the complete section of tubing weighs a total 5,500 tonnes – a milestone in Russian microtunnelling history.