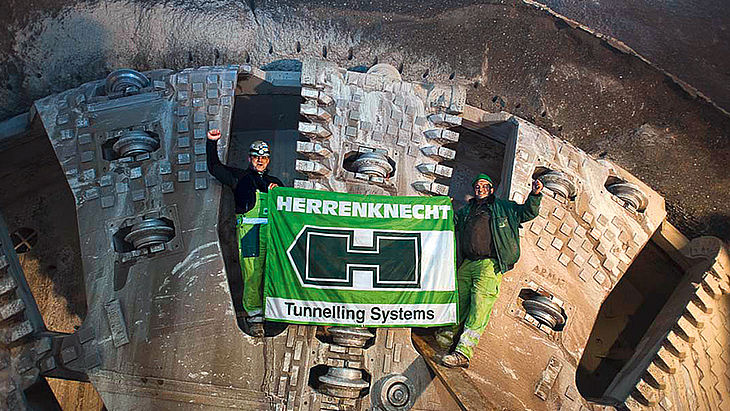 New Lower Inn Valley Railway
Austria, Münster, Jenbach
On the way to the Brenner Base Tunnel

The transit traffic crossing the Alps is growing enormously and especially the road traffic is a major burden for man and nature. Therefore, a high-capacity railway connection is being built through the high-altitude mountains between Munich and Verona. The route under the Brenner Pass will carry a share of the rail traffic between south and Central Europe. The centerpiece will be the 64-kilometer-long Brenner Base Tunnel - the future longest traffic tunnel in the world. With the employment of the Herrenknecht TBMs for the New Lower Inn Valley railway, large diameter tunnels in Austria are driven by machine for the first time in aqueous soil. The tunnels of the lots H3-4 Münster-Wiesing and H8 Jenbach are part of the construction of the access route to the Brenner.

The routes run mainly below the groundwater table through very heterogenous mixed geology with little overburden of sometimes only half the machine's diameter. The Herrenknecht solution: the two tailor-made Mixshields S-352 for 5.8 kilometers of tunnel (Lot H3-4 Münster-Wiesing) and S-381 for 3.5 kilometers of tunnel (Lot H8 Jenbach). For Lot H8, the tunnelling giant was equipped with an isolated invert in order to prevent cloggings in the excavation chamber.

Part of the scope of supply was an efficient separation plant, that treated reliably the bentonite for reuse as support fluid. The two Mixshields reached the finish lines in February and April 2009 after best weekly performances of up to 108 and 163 meters respectively.

Also on the jobsite: a retractable AVND4000AB for a total of 17 escape tunnels. The machine with an outer diameter of 4.8 meters was lowered first into rescue shafts that had been sunk beforehand. From here, the machine started tunnelling diagonally to the tunnel axis in the direction of an area that had been reinforced by cement injections and that will later be expanded as a rescue space. To rectract the Herrenknecht micromachine back through the escape tunnel completed by the machine, it was equipped with a special mechanism to fold the cutterhead.

This technology was used for the first time on a retractable Herrenknecht machine of this size – a success: On December 2, 2009, the last escape tunnel could be completed successfully. 825 meters of emergency tunnels, with lengths of 18 and 130 meters, have been driven using this innovative technology.