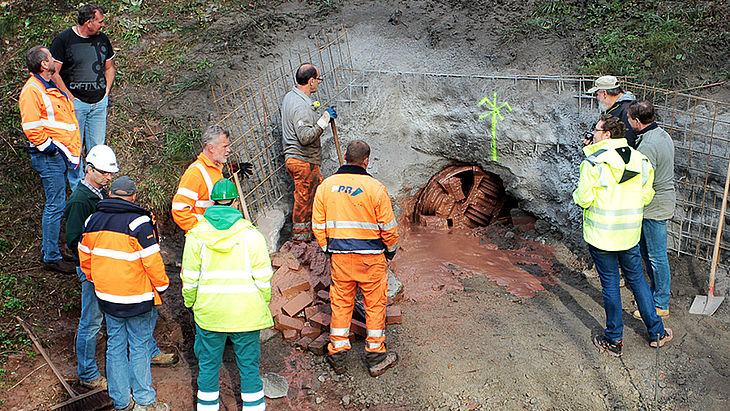 Bucking the general trend, Freudenstadt, known for the largest market square in Germany, is one of the few cities in the northern Black Forest that continues to grow. Because of the huge demand for housing, the new residential area "Sonnhalde Süd" in the southeast of the city with space for around 1,000 people is also being developed.

The new housing development is surrounded by existing residential areas.  Since rainwater there cannot seep into the ground, an efficient drainage concept to relieve the existing sewage system was needed. The municipal storm sewer system carries water from precipitation away and into the Manbach drainage channel. To this end the rainwater is passed through the locally erected stormwater holding tank and released into the channel at a slower pace.

In order to reach the channel, several tracks of the main train station directly adjacent had to be crossed under over a distance of 146 meters with a gradient of 4.5%. The Freudenstadt municipal administration therefore decided to use a Herrenknecht AVN machine with a mixed cutterhead to carry out this construction project together with specialist civil engineering company Peter + Partner Rohrvortrieb from Reutlingen.

With its slurry-supported excavation concept the allrounder machine can be used for safe tunnelling in ground conditions of all kinds. In Freudenstadt the 75 kilowatts machine advanced through talus material consisting mainly of layered red sandstone. The tunnel was lined with 3-meter-long reinforced concrete jacking pipes (DN 800, DA 1100).

After three weeks of tunnelling, the machine reached its destination in late October and was lifted out of the excavation pit by a mobile crane. With the completion of the construction project, the sewage network in Freudenstadt was expanded to meet requirements and adapted to the needs of a growing city.